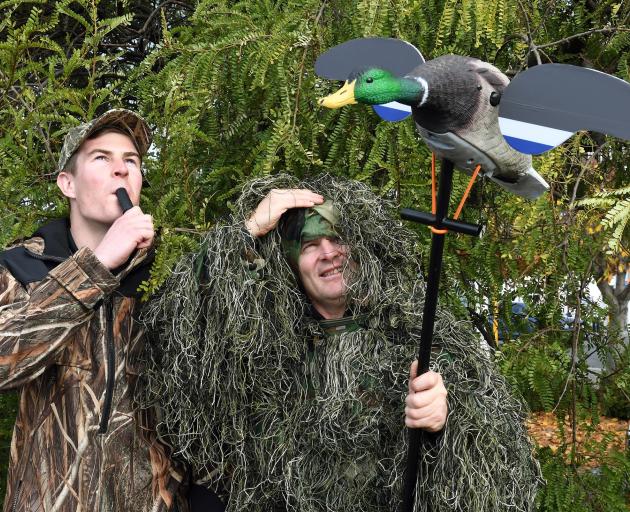 Hunting and Fishing Dunedin employees Riley Bungard (21, left), a self-described "game bird sort of guy," and Nev Sharp (49). PHOTO: STEPHEN JAQUIERY
The weather forecast for the opening of duck-shooting season this weekend is good news for the region's game birds.

MetService forecaster Cameron Coutts said there was unlikely to be any low cloud around Otago on Saturday or Sunday, which shooters liked because it forced birds to fly lower.

"It looks like it's in favour of the ducks."

Hunters also liked to see strong winds for opening weekend, which falls on the first weekend in May, as this too forces birds to fly lower and within range of their shotguns.

But Mr Coutts said shooters were out of luck in this regard as well, with northerlies dying out through Saturday, although winds could strengthen again on Sunday.

Hunting & Fishing Dunedin store owner Scott Kunac was not surprised by the forecast.

"If you wanted to get married you'd schedule it on duck-shooting weekend," he said.

Mr Kunac did not think it would deter the city's shooters from being out there and doing it this weekend, and sales of duck shooting gear like decoys had been steady in the lead-up.

Popular this year were his "fully-flocked" decoys, with a velvety finish that was not as reflective as other decoys, meaning they were more likely to deceive the ducks.

Camouflage was also important when duck-shooting, as the birds had better eyesight than humans, he said. Anything which helped hunters blend in with the surroundings was encouraged, such as brown/green face paint.

Save Animals From Exploitation (Safe) campaigns director Marianne Macdonald was pleased to hear Otago ducks could be in for a reprieve.

She said the birds often died a "slow, lingering death" after being shot from outside a shotgun's lethal range, or being felled by inexperienced shooters with poor aim.

Hunters' claims that they were acting as conservationists by reducing numbers of introduced ducks to free-up feed and nesting areas for native birds did not wash with Ms Macdonald.

"If they were really concerned about protecting habitat and food supply of rare ducks they would choose to completely wipe out those [introduced] birds."

Otago Fish & Game Council chief executive Ian Hadland said hunters were indeed acting as conservationists, as revenue gathered from hunting licences was spent on protecting and creating wetlands "which are of benefit to all species".

"Fish & Game's 35ha enhancement of rush-covered failed farmland at Takitakitoa in the lower Taieri is a good example. Two years after restoring surface water to the area it's literally covered in waterfowl, many of them protected native species such as grey teal, royal spoonbill, and [it] is also now prime inanga (whitebait) habitat.

"That was paid for by hunters".

Maritime New Zealand general manager maritime compliance Kenny Crawford was encouraging hunters to wear life jackets and take communication devices, such as emergency rescue beacons, with them when heading out on the water.

"New Zealand lakes and rivers can be remote and treacherous, and duck hunters have lost their lives because they are not properly prepared."

A coroner had recently ruled an Auckland duck-shooter drowned when his dinghy capsized on the Waikato River. He had told his friends, who were wearing lifejackets, he was not wearing his because it hampered his ability to steer.