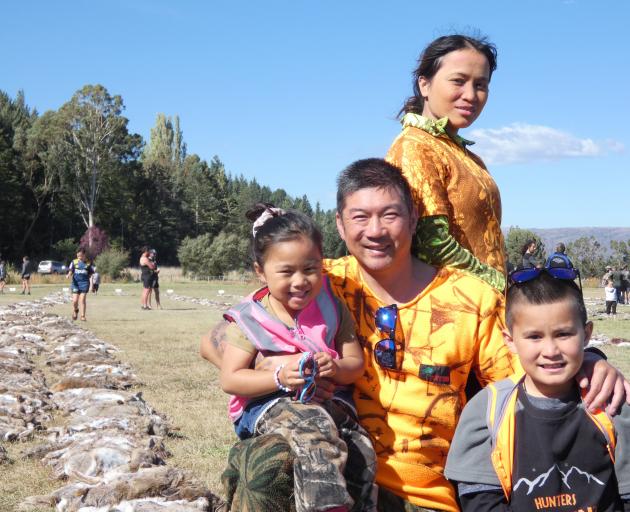 Eddie Lai, his partner Jessa De Delara, and the couple’s children Megan Lai (4) and Miguel Lai (9) reflect on the weekend’s shoot. PHOTO: JARED MORGAN
The message could not be any clearer — when it comes to Central Otago and Wanaka’s countryside there is only one bunny welcome at Easter.

Twenty-five teams of 12 set out to prove that at the weekend.

Yesterday the weary hunters from across the South Island and beyond returned to the Dunstan Equestrian Centre near Alexandra to tally the numbers of rabbits killed as part of the expanded-format Great Easter Bunny Hunt.

It was cancelled the following year because of the Otago Regional Council K5 rabbit virus release programme.

Further cancellations followed in 2019, due to an extreme fire risk, and last year, because of Covid-19. 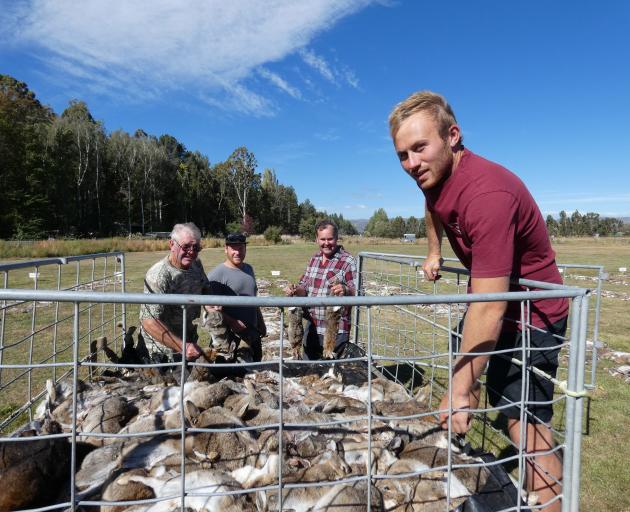 The Bunny Buster team (from left) John Dooley, Callum Young, Greg Lowen and Joseph Walshe unload their kill. Team members came from Cromwell, Oamaru and Ashburton. PHOTO: JARED MORGAN
The three-year hiatus and the longer time frame was reflected in the death toll netted from blocks of land from from Millers Flat, to Wanaka, and to Lauder.

Leona Evans, of the second-placed Hokonui A Team, from Invercargill, said the event was a "bit wet at the start" and "a bit windy at the end".

Team-mate Colin Evans said it was "good in the middle".

Christchurch man Eddie Lai, a member of the Bannockburn Bunny Killers team, said he had fun but believed his team had fared the worst.

The winning team was Overkill with 1185 rabbits, runner up was the Hokonui A Team with 1160 rabbits, and the Celine Dion Fan Club Team came in third with 1146 rabbits.

I wonder what kind of result could occur if a small team of butchers attended this event with a freezer trailer.... That would be a huge amount of pet food...

Not only pet food; for me at least, no meat is better than rabbit, with a few slices of bacon. But that was 70--80 years ago, and I imagine most people would now turn up their noses at mere rabbit.