Tony Chadderton (left) and John Faul, both of Invercargill, attempt to entice ducks on the opening day of duck-shooting season at Awarua. PHOTOS: JANETTE GELLATLY
Southlanders woke to a perfect day for the start of the game bird hunting season on Saturday- perfect for ducks, not the shooters, due to high cloud.

Mai mais had been stocked and duck ponds fed before the highly anticipated opening day.

Fish & Game reported more than 40,000 people, including about 5500 from Southland, were licensed this year to hunt birds such as mallards, paradise shelducks, shovelers and black swans.

However, it would appear some were more prepared than others.

At least one duo decided on the Thursday to get things ready for opening day.

The result was a pop-up mai mai, stocked with home-made food courtesy of their wives, and flasks of hot water to help keep them warm. It was a competition as to whose wife had made the best mousetraps and there was even quiche.

Veteran hunters John Faul and Tony Chadderton set up "camp" at Awarua, semi-ready for the break of dawn. 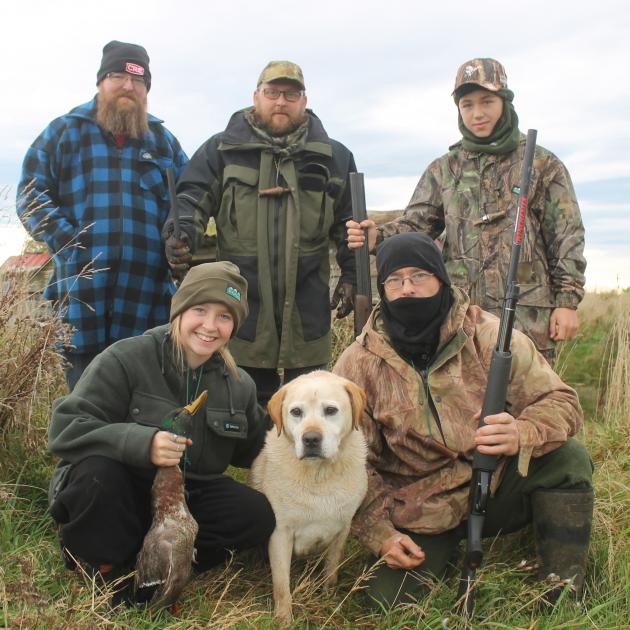 "The ducks have a pretty good chance of getting away if I'm at the end of the gun," Mr Chadderton said.

With more than 60 years of experience between them, the two enthusiastically called to the birds.

Asked, why they dragged themselves out on a Saturday morning before the "quack of dawn", Mr Chadderton said it was about having fun.

"It's good to get out with mates."

It was also the challenge of trying to shoot something "darting around in the sky".

"It's an amazing sport when the ducks are flying past."

Asked the same question, Mr Faul said, "It's a traditional sport ... why wouldn't you want to be out on such a lovely morning?

"It's one of those events of the year when you get up early ... see the sunrise and enjoy the sport of hunting."

Mr Faul said the cloud was too high on Saturday, which might explain their bag of one definite, and one maybe by midmorning.

"A good day would be stormy ... and dawn and evening are the best times."

Asked how they preferred their ducks to be cooked, Mr Chadderton said duck a l'orange, but also suggested cooking them in milk to keep the meat moist.

From a nearby mai mai, the smell of bacon wafted out. 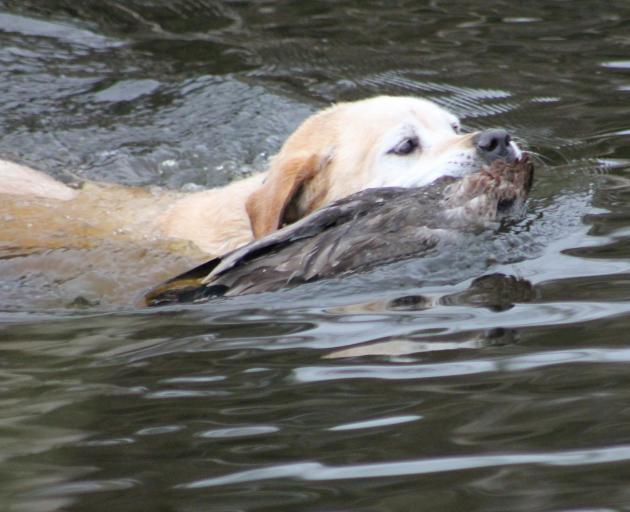 Charlie, retrieves a duck.
The Bell family - father Scott Bell and his children Tyler and Charlotte, all of Seaward Downs - had been joined by Darren Bell and spotter Darcy Ruffell, both of Invercargill, and Charlie the dog.

His father was at another pond.

By midmorning they had recovered at least 10 birds.

Charlotte, in her fifth year at the mai mai, and Tyler, into his fourth year, were clearly enjoying the family day out.

"I love the sport and socialising ... and being out with dad," Charlotte said.

For Tyler, it was simply "fun".