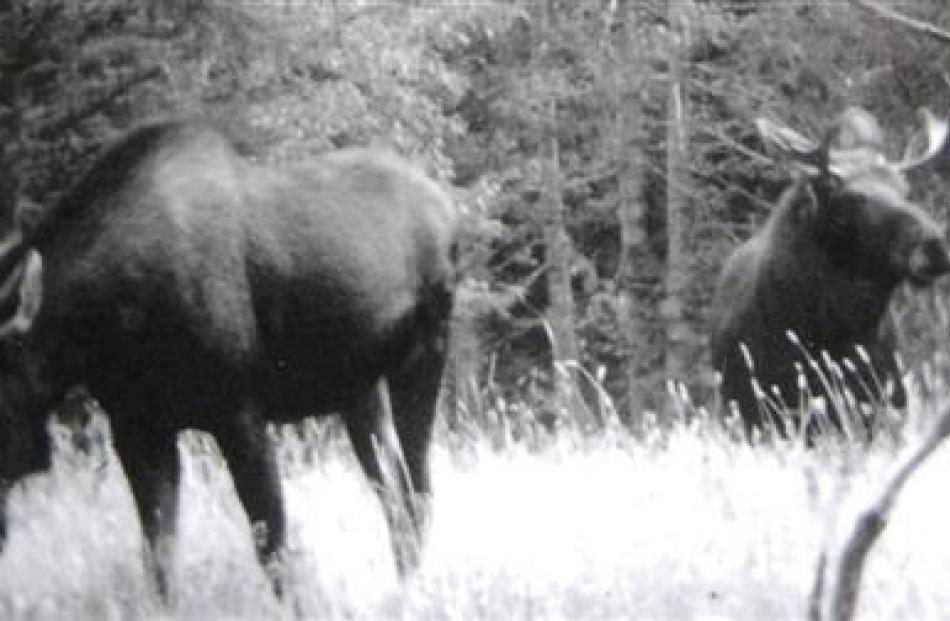 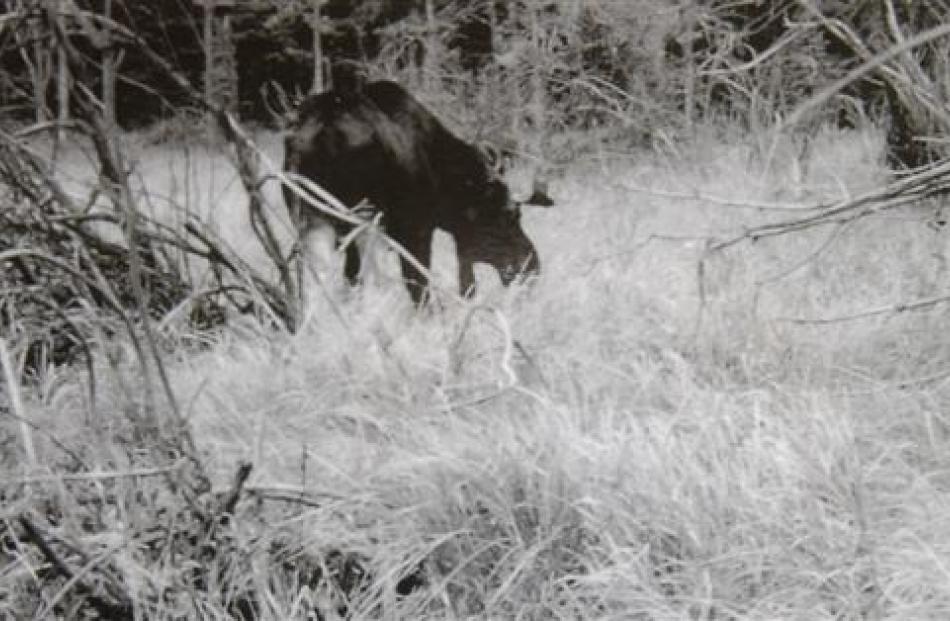 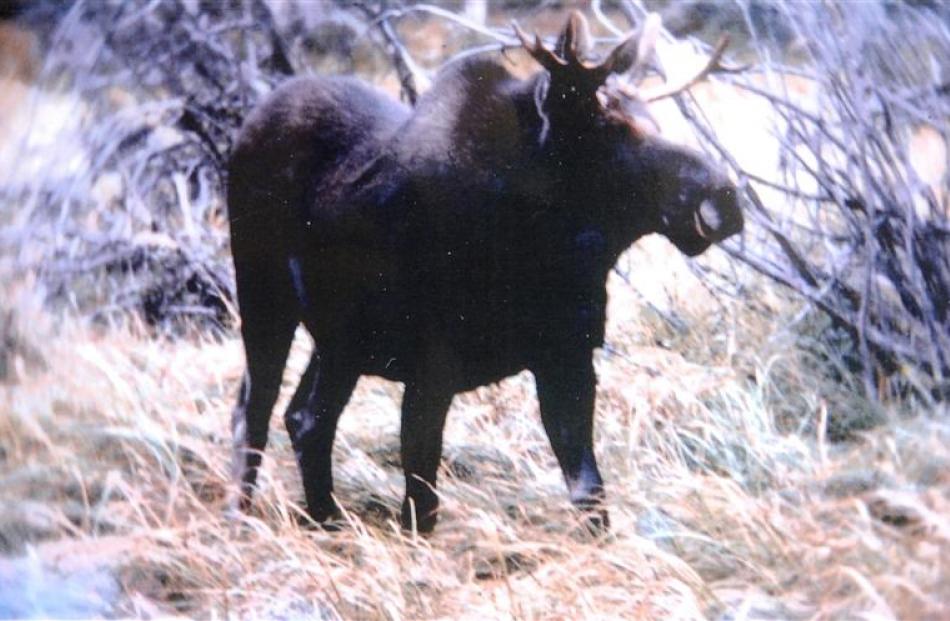 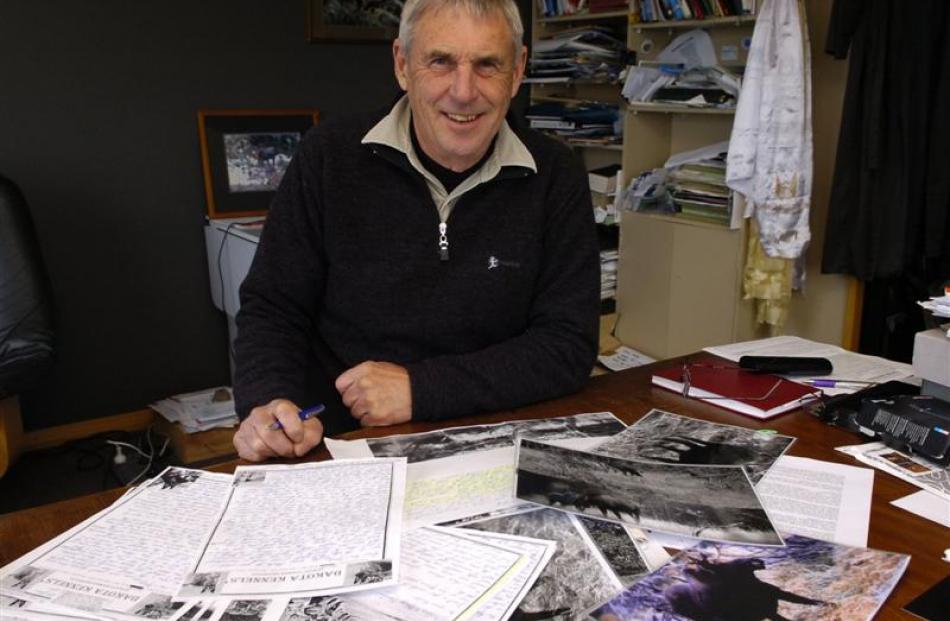 Four photographs of moose taken by a hunter in Fiordland almost 60 years ago have finally been revealed publicly.

Fred Stewardson (78), of Hikurangi, in Northland, took the photographs on a hunting trip to Wet Jacket Arm in 1953.

But his older hunting companion, friend and mentor Eddie Young, swore him to secrecy, fearing the moose would be shot by hunters if the photographs were revealed at the time.

Only a handful of photographs of moose in Fiordland are known to exist, most taken between 1923 and 1952.

Mr Stewardson's photographs, taken from about 70m, include the only known photograph of a group of three moose - a bull, a cow and its calf.

Ken Tustin, of Bull Creek, near Milton, who has spent years searching for the descendants of the North American moose released in Fiordland in 1910, describes the rare photographs as "by far the best and most informative" he has seen.

He also regarded the history of the photographs as "quite an extraordinary moose story".

"Since we've been in touch, Fred has got such a kick out of our moose quest.

"He has rediscovered his own interest in moose and has gifted us the use of his photos.

"He now figures the secrecy agreement has been outlived and ... when he goes, he doesn't want the story and what he knows are very special pictures to go with him."

Mr Tustin said he learnt of the photographs too late for his 2010 book, A (Nearly) Complete History of the Moose in New Zealand.

"The photos would have transformed it."

Mr Stewardson, who was dairy farming at Kakanui in the 1950s, was always a keen hunter and photographer.

In letters to Mr Tustin, he recalled how he came across the moose and how he rushed to take the photographs with his Agfa Super Silette and telephoto lens.

"It's just a pity that I never took more time but it was the excitement of seeing three wonderful animals right there and Ed saying, `Don't shoot.

"I remember shaking trying to look and also set up the camera.

"It all seemed to take so long.

"I'm disappointed that I didn't get a better shot of [the cow] with her calf but I guess I mustn't complain. I'm lucky with what I got."

The hunters tried not to startle the moose, he says.

"They didn't seem in an alarmed situation but by the photo I think [the bull] knew something was wrong. He looks upset and perhaps ready to charge.

"After the photos, we just moved away from the animals and ... left them to it.

"Ed was a terrific guy in not shooting everything he saw and he taught me so much over many years hunting with him."

Mr Stewardson says he was "just the boy tagging along" and he did as instructed by Mr Young, who told him: "Keep your mouth shut. Don't ever tell a soul. If you do, Fiordland will have loads of trigger-happy clowns there for slaughter. Many won't give a damn if moose survive or not.

"When I look back now, he was so correct."

He believes the moose encounter was at the head of Wet Jacket Arm.

"I didn't really like the area - rain, mud and biting bumblebees. Give me the Hollyford any day."

The photographs were originally colour slides but had faded and had water stains.

"I keep looking at these snaps ... they bring back so many great memories. Wish I was young and fit again.

"I wonder now just what happened to them in the end."

Mr Young died in 1980 and Mr Stewardson said many of his old hunting mates were also now in "another world".

"This is why I'm so happy to pass information on.

"Once I croak, a lot of my junk will be burnt and gone forever."

He wished Mr Tustin well in his quest to prove beyond doubt moose are still resident in Fiordland.

"I expect some day to see your lucky moose photos. That day can't be far away. Have faith."

1900: Four young moose captured for intended release - survivors of 14, after 10 died in a storm at sea - said to be as tame as pet ponies and keen on eating biscuits by the time they arrive by ship in New Zealand.

They have been imported from Canada and shipped to Greymouth from Wellington. Railed to Hokitika, they are temporarily kept in stables before being released near the Hokitika Gorge on February 19, 1900.

Three animals disappear up the gorge. Some accounts suggest at least one of these animals survived until about 1903.

The fourth, a cow, remains near Vine Creek for 14 years and is an occasional visitor to the settlement of Koiterangi, apparently still searching for biscuits.

After being quarantined at Somes Island for nearly two months, they are shipped to Bluff, transferred to a government steamer and released at Supper Cove, Dusky Sound, Fiordland, on April 6, 1910.

One female breaks its leg at the shoulder in a fight with another animal upon release. One cow is shot within weeks of liberation.

1927: Two young bulls seen and photographed in the Seaforth River by Les Murrell; a cow seen the next day.

1929: Eddie Herrick, operating on a prospecting licence with guide Jim Muir, in March shoots a bull moose "well past its prime".

It may have been one of the animals originally released.

1934: Eddie Herrick shoots another bull, this time in the creek that now bears his name.

This for years is considered to be the last moose shot in New Zealand. Robin Francis Smith later takes 14 photographs of a cow at Herrick Creek.