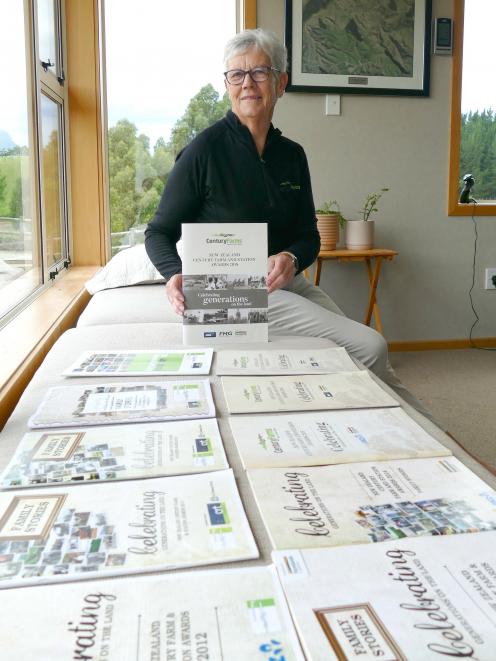 Century Farms chairwoman Karen Roughan reviews some of the souvenir programmes from 14 years of the Lawrence-held celebration of long-standing farming families, set to take place once more this May. PHOTO: RICHARD DAVISON
Organisers of an annual celebration of rural history are crossing their fingers Covid-19 will not intervene again this year.

After having to postpone last year’s Century Farms event due to the Covid-19 lockdown, organisers said they were hoping a long list of patient participants would finally be able to celebrate in Lawrence this May.

The event, which celebrates families who have been farming their own land for 100 years or more, held its first and, until now, largest gathering in 2006, but was due to beat that record with 70 attending families spread over two weekends last year.

Century Farms chairwoman Karen Roughan said she was delighted only one family had dropped off that roster since, although it still left the three-day event vulnerable to a change in Covid-19 alert status.

"The record numbers we were due last year, now this, are due to the large number of government ‘Soldier Settlements’ after World War 1, where returned servicemen were given parcels of land to improve and farm.

"That meant we had already adapted the event to run over two rather than the usual one weekend, but unfortunately means we would be well over the 100-person threshold for gatherings under Level 2."

However, the event committee remained cautiously optimistic and was in the final stages of planning, she said.

"Obviously, we’ll go ahead if at all possible, but if the worst does happen, we’ll have a tough decision to make."

Mrs Roughan said about 25 families were already booked in for next year’s event.

"At some point we’ll catch up."

The event had become a fixture on the farming calendar for many and was looked forward to by those attending.

"People get very excited. One North Island family is bringing 10 relatives down, and we have a Catlins gentleman who checks in regularly to be sure we’re going ahead."

Thirty-three families would attend from the North Island this year and 36 from the South.

Eight sesquicentennial awards would be presented, recognising families who have been farming their own land for 150 years or more.

The committee was yet to confirm the guest of honour, Mrs Roughan said, although an appeal to the highest authority had been made.

"We’ve invited the Prime Minister. It’s been a few years since we had a prime minister come along, but that was Helen Clark and she came two years in a row, so who knows."