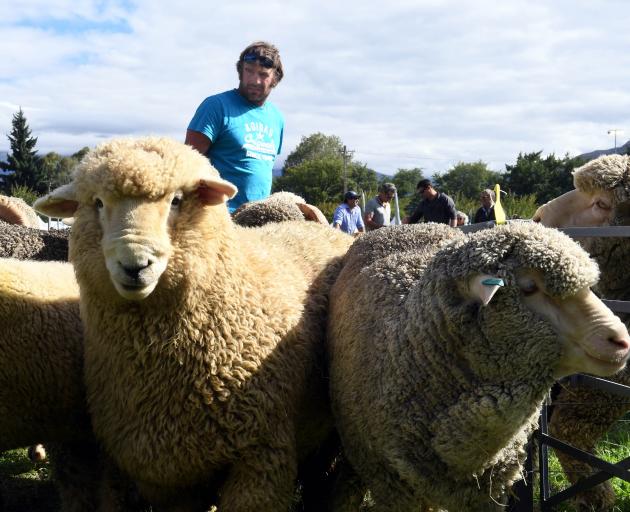 He listened to that advice and followed it through, saying the Stonehenge sheep had not really altered over the years, as they had stuck to the traditional.

It also marked a changing of the guard with Jim and Sue Hore's two sons, Charlie and Andrew, now at the helm of the operation.

And Andrew and wife Frankie's son Tyrell (5) was keeping a close watch on proceedings on Friday, along with Jim's unbelievably sprightly mother Donella (93).

Tradition was something that was important to the Hore family and Jim Hore said eye appraisal and stockmanship were still crucial.

That was echoed by Robbie Gibson, from Malvern Downs, at Tarras, who believed there was too much emphasis on estimated breeding values.

While he had "no problem'' with EBVs, farmers needed to have animals that were best suited to their country. Constitution and structure of the sheep had to be right before other attributes were looked at.

It was a bit like the meat industry, with premiums for the likes of eye muscle area; the wool market needed to buy on CV (coefficient of variation) and curvature, he believed.

The tour attracted participants from throughout the country, including Hawke's Bay farmer Hugh Pearse who jumped at the opportunity to have a look at some South Island high country properties.

Mr Pearse, who breeds Poll Dorset and Poltex (Texel-Poll Dorset cross) sheep, said it was great to get into that country.

He was impressed by the farmer turnout on the tour, which he attributed to the good fine wool returns.

PGG Wrightson Wool business development manager Craig Smith said the tour had been ``fantastic'', with a great range of sheep on display.

Everyone was excited about the industry at the moment, with good wool prices, and farmers were able to reinvest in their farms.

Craig Adams, from New Zealand Merino Company, said it was great to see some buoyancy and enthusiasm in the industry.

Merino wool prices were the best they had been for a long time and long-term contracts could provide stability for farmers into the future.

Those on the tour were enjoying networking and talking and that was fantastic, particularly after a ``tough run'' with the recent dry spell, he said.

The tour dinner was held in conjunction with the Otago Merino Association awards in Alexandra on Friday night.

- Ultrafine (15.8 and under): Matarae (Will and Emily Jones) 1, Northburn (Bevan and Tiffany McKnight) 2, Matangi (John and Mary-Liz Sanders) 3.