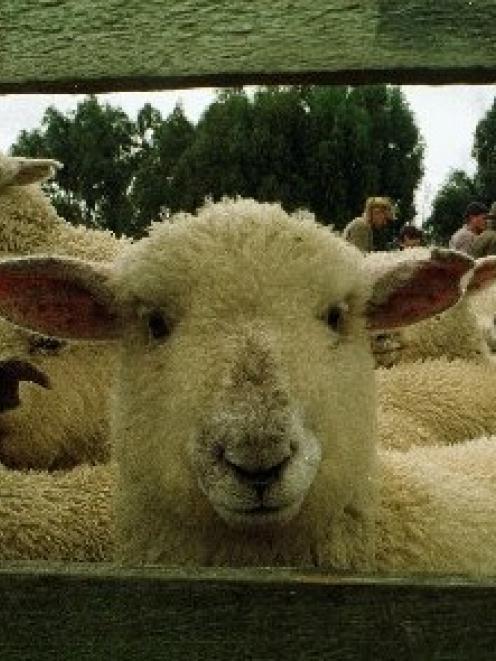 A meat industry strategy is expected to target several existing industry structures as blocking the flow of market information. ODT file photo.
On-farm store lamb sales and the role of stock traders are being questioned by a meat sector strategy report for adding costs and little value to the meat industry.

The report for Beef and Lamb New Zealand, by accountant and business consultant Deloitte, identifies the established practices of on-farm store lamb sales and third party traders as breaking the flow of market information from market to farm while adding costs and little value.

Beef and Lamb New Zealand chairman Mike Petersen said the role of third party traders had been raised by many during the collation of the report, particularly by farmers.

They had also questioned whether farm advisers and stock and station agents were adding value or adding to costs.

The red meat sector strategy is expected to be released in early January before public consultation meetings later that month and early February.

Mr Petersen said while some in the sector were profitable, there were opportunities to improve the performance in every part of the supply chain, especially if an activity was blurring communication between farmers and the market and adding costs to the industry while contributing little.

"If pieces in the chain keep breaking the flow of information, farmers can't produce the product the market wants."

Headage payments made by meat companies to traders for animals supplied distorted the market and was not market-based, he said.

The Otago Daily Times has been contacted by a farmer angry at comments by Alliance Group chief executive Grant Cuff, who accused stock agents and traders of clipping the ticket in the supply of lambs between farmers and meat companies while adding little value. This was particularly pertinent this year because the lamb kill could be less than 20 million.

The farmer, who asked to be anonymous because of his role in the industry, said one reason stock agents could do that was because those paid on commission had deals with meat companies in which they were given headage payments and killing space.

Because of these arrangements, he said commission stock agents were able to make substantial incomes, often at the expense of farmers who paid commission to an agent only to have the stock sent straight to a meat company or grazing, for which the agent was given a commission or headage payment.

Mr Petersen described on-farm lamb sales as a disposal process, which benefited vendors in the short term but left them without information on the quality of lambs grown.

He would prefer a system where store stock producers worked with lamb finishers to ensure the lambs bred were what the meat industry wanted.

The Deloitte report will identify in financial terms the cost to the industry over a year of these practices and the estimated benefits of changes to the way stock is supplied and processing efficiencies.