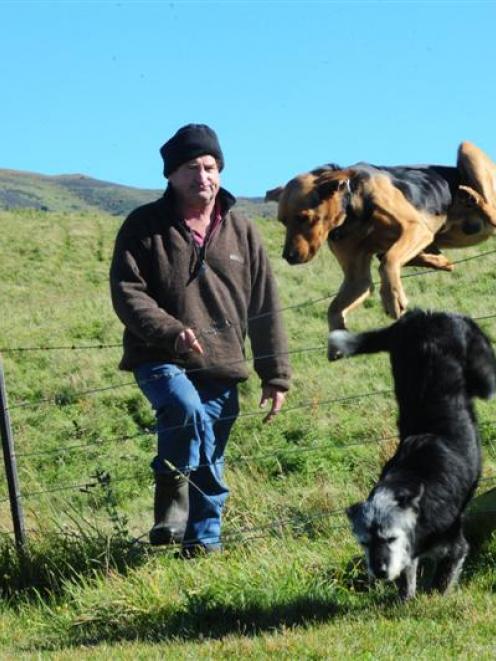 Hyde farmer Bevan Dowling with his dogs Fog and Kate, which cost him $108 to register with the Dunedin City Council each year. If he lived 15km north, he would pay just $22 to the Central Otago District Council. Photo by Craig Baxter.
If registering a working dog in Central Otago costs $11 and in Waitaki $28, why does it cost $86 in Dunedin?

Figuring out why he pays more than some of his neighbours to register his working dogs has left Strath Taieri Community Board chairman Barry Williams barking mad.

He lives in Middlemarch, governed by the Dunedin City Council which charges $86 for one working dog to be registered and $22 for each subsequent dog.

Working dog registration fees in the Otago region vary from $11 in Central Otago, to $25 in Queenstown and $28 for the first and $13 for subsequent dogs in Waitaki.

The fee discrepancies were "ridiculous", he said. "I'm not advocating people not to register, but I'm close to it."

The fees kept creeping up and "we've moaned every year" but he hoped a strongly worded submission to this year's annual plan would pull the cost down.

Mr Williams "never really had an answer" as to why the fees were so high for working dogs, but thought a lot of the fee revenue was spent on radio advertising to target domestic dog owners.

"The ones they are trying to target probably are not registered anyway." He believed a $20 fee for the first dog and $10 for dogs thereafter would be more reasonable.

However, DCC development services manager Kevin Thompson disagreed, saying when the fee structure was applied to the average number of working dogs on a farm - four - it was reasonable.

While he "understood where they are coming from", the council was running a full-time animal control unit in a metropolitan area and could not operate on the revenue generated in smaller areas such as Clutha or Waitaki.

The council had 15,241 dogs registered, 1324 of which were working dogs. Revenue from registration fees funded the animal control unit which dealt with 3776 complaints last year, 129 of which related to working dogs.

Mr Thompson said the fee structure was "historic" and did not expect the council to change it. Central Otago District Council manager of planning and environment Louise van der Voort said the district council maintained a differential between urban and working dogs.

"In recognition of the fact that the cost of dog control largely comes from dogs in urban areas, rather than farm dogs," she said.

All of the council's registration fees went into dog control and working dogs "don't put a lot of cost on our system".

Dog problems were far worse in cities than in rural areas, which he believed could be behind Dunedin's higher fees.