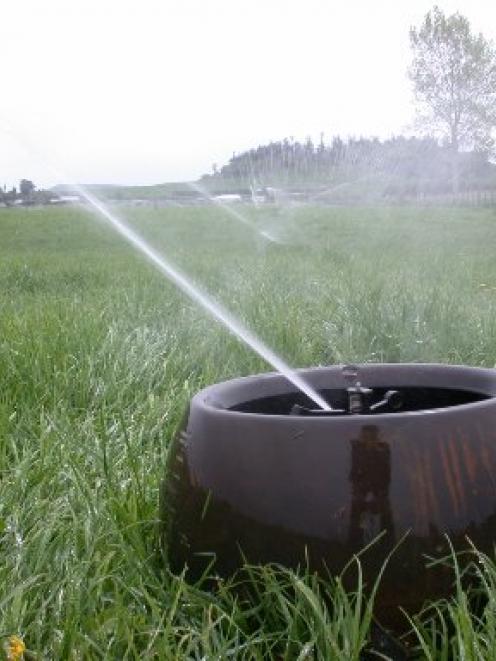 Irrigation has changed the face of North Otago farmland. Photo by David Bruce.
"Irrigation really is the future" - that is the message from North Otago Irrigation Company chief executive Robyn Wells as the company plans for the second stage of its scheme.

Preliminary estimates for stage two have been put at about $90 million.

With an estimated two-year construction phase, it was a large-scale and complex infrastructure project, Mrs Wells said.

The company was approaching it "in a very disciplined and staged way" and was going to do everything it could to put forward a viable proposal by the end of the year.

Irrigating 10,000ha, it delivers water from the Waitaki River to farms on the North Otago downlands and in the Waiareka Valley.

In a report by the AgriBusiness Group last year, it was estimated stage one increased farm output by almost $44 million a year and had created an extra 76 jobs.

Farmers had spent about $62 million in land conversion costs, over and above the cost of the scheme.

The first stage has enough capacity from its intake and pump-house at Black Point to handle a second stage.

At the moment, the North Otago Irrigation Company was close to completing options analysis for upgrading the Black Point part of the scheme.

A study was also being completed by an agri-business consultant to determine how much farmers could afford to pay for irrigation.

The irrigation company was communicating with interested parties - some community meetings have been held - and the feedback was "tentatively positive", Mrs Wells said.

Once the final proposal was completed, the company would ask farmers to invest in "the right project at the right price".

Workshops discussing the affordability of the proposal would probably be held in late June.

It was a big project and the company needed to put together a strong business case that showed it had looked at the options, done the analysis, understood the market, got an indication on uptake, and the returns it was going to generate for investors and the community.

Irrigation provided the ability for "people to sleep at night".

"It's really about security and it's about options," she said.

Any affordability models needed to look at various scenarios, including a drop in commodity prices so risk could be managed.

This season had been "pretty light" irrigation-wise for those involved with the first stage of the scheme, because of high rainfall.

Overall, that was positive for shareholders, as they did not have to pay for water and money could be used to pay debt, she said.

The irrigation company welcomed the pre-Budget announcement on the Irrigation Acceleration Fund to support development of irrigation proposals to the investment-ready stage.

External investment was something already being considered for financing the stage two development.

The company was also involved with an Irrigation NZ project based on hill country irrigation which had secured funding from the Ministry of Agriculture and Forestry's sustainable farming fund, Mrs Wells said.

"This is where hill country irrigation is happening in New Zealand," she said.

Environmental responsibility was also "huge" for the company and it had a significant budget approved for managing that aspect of its business.

Mrs Wells, who has spent 10 months in the job, said she was committed to seeing the company expand.

She was backed by a committed and experienced board, who were "100%" behind her and also behind what they believed irrigation did for the community.

The company had a new logo and was about to launch a new website.

"What we are trying to do is develop some visibility and transparency to our business."

While irrigation was new for Mrs Wells, she was no stranger to rural-based industry and investment and infrastructure projects.

Before working as executive vice-president of operations with an ethanol company converting grain to fuel in Iowa, in the United States, she was with the Colonial Sugar Refining company in Australia as project manager planning with national operational roles.

Waitaki Mayor Alex Familton said returns from the $10 million loan the Waitaki District Council made to the irrigation company had "exceeded expectations".

Those returns included the productivity which had flow-on effects for all parts of the district.

In terms of rates, there was a return in the rate-take increase.

The latest Business and Economic Research Ltd report showed in the 2009-10 financial year, real value added (GDP growth) in the Waitaki district was 2.2%, compared with a 0.4% decline nationally.

Mr Familton attributed "a very large slice" of that percentage increase to irrigation.

Stage two was "an extra bonus" and in its "inevitable fruition", it would "step the productivity up another gear", he said. 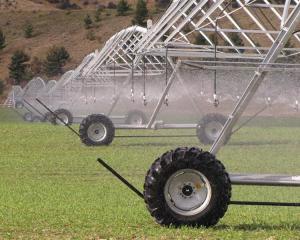