The success of farmer-owned irrigation schemes was stressed during the launch of a book outlining the history of government irrigation in New Zealand. Photo by Mark Price.
The shift from state to community ownership of the Maniototo irrigation scheme amounted to an ''extraordinary and unexpected gift'' to the farming community, local farmer and irrigation veteran Geoff Crutchley says.

Mr Crutchley was speaking at the launch of Irrigation Scheming - a history of government irrigation in New Zealand - at the Patearoa Bowling Club on Friday.

The book, written by retired civil engineer Peter Farley, is a history of government involvement in the development, ownership and sale of 48 irrigation schemes throughout the country from 1916 to 1990.

It detailed what Mr Farley described as ''shocking'' financial management under government control and the impressive achievements under irrigator ownership, along with the events leading up to the sale decision and the process by which the sales were negotiated and settled.

Construction of the Maniototo scheme was halted in 1984 when it was only 40% complete. A few years on, the irrigation empire that had been built and managed by the Ministry of Works and Development was sold in pieces to the farmer clients.

In a blurb on the back cover of the book, Mr Crutchley said it was an ''extraordinary sequence of events'' for those who were involved - ''a story of political spin, gross incompetence, heroes and villains, and a happy ending.''

For farmers involved with the many irrigation companies around New Zealand, it was an excellent history reference. It was also a modern parable of ''what works and what doesn't'', he said. 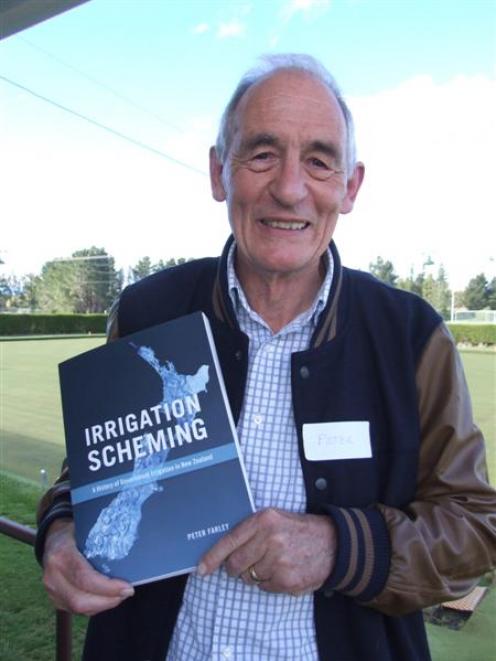 Peter Farley with his newly-launched book, <i>Irrigation Scheming</i>, at the Patearoa Bowling Club on Friday. Photo by Sally Rae.
In the opening chapter, Mr Farley said the story of the Maniototo scheme was the most important in the history of New Zealand government irrigation schemes. It demonstrated, in conclusive terms, the enormous costs imposed by government ownership and operation. To the long-debated issue of whether government or farmers could better manage complex irrigation schemes, it provided an unequivocal answer - the farmers, he said.

Mr Farley, who lives in Waikanae, said the story had been ''niggling'' at him for the past 22 years and, while he had found many reasons over the years for postponing it, he had finally put it into print.

When the Government made the decision to sell the schemes, he was working in Treasury. When asked if he was interested in helping with the sales process, he said yes ''and the rest is history'', he said.

It was particularly appropriate that the story of the goverment irrigation schemes was launched in Patearoa, because the ''Maniototo saga'' had stuck with him over the years, along with what was achieved.

It was ''wonderful'' to be back in the district, after more than 20 years, and to see so many familiar faces, he said.

When he started working on the sales process, he thought he already knew how inefficient government organisations could be. By the end of the process, he was staggered at the revelations of just how bad the Ministry of Works had been, institutionally, rather than individually, he said.

Irrigation schemes that were not owned and controlled by farmers were not successful and that was the case ''all around the world''.

It was not a question of kicking out local and central government - they had an important role to play in irrigation schemes - ''but, if you get it wrong, you're going to recreate the problems of the past'', he said.

Speaking at the launch, Mr Crutchley, who is chairman of the Upper Taieri Water Resource Management Trust, said the sale of the Maniototo scheme had put the community in charge of its most important resource.

To continue to succeed, there would have to be changes and he believed the changes needed now involved ''far more meaningful involvement'' with other water users.

More rules and guidelines were not needed. The real answer was to be found among the people who had the best knowledge of the resource, he said.

Waitaki MP Jacqui Dean thanked Mr Farley for the work he had done for irrigation ''which underpins not just this economy, but the national economy''.

What was needed in the future was to use the strength of the community to work with its regional council in a way to get the best outcomes not only for farming but also for water, she said. If there were not good outcomes for water quality and allocation, then the pressure would come on the sector.

She wanted to see farmers ''running'' to meet those challenges, rather than reacting to them.

Graeme Martin, the former chief executive of the Otago Regional Council, had the ''dubious honour'' of being the last Ministry of Works employee to have responsibility for the irrigation schemes in Otago.

Selling the schemes brought huge change for the Government and farming communities and, in reality, that change had been for the good.

New Zealand was all about growing primary produce and water was a huge part of it. Irrigation had opened up opportunities in Otago, he said.