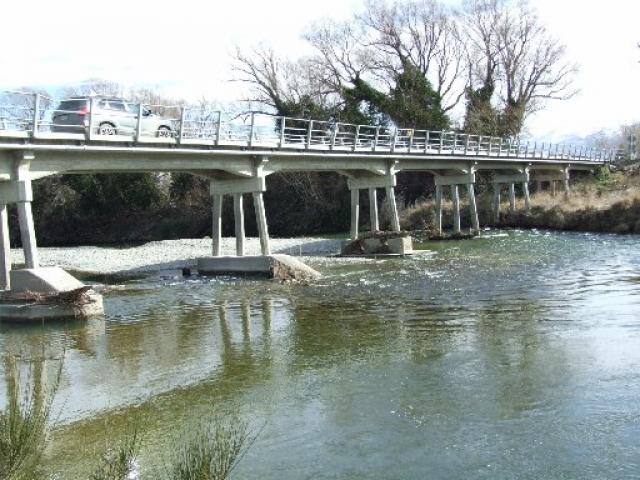 Suggested minimum flows for the Manuherikia River would threaten farming, orchard and winegrowing operations in Central Otago and the Otago Regional Council is being ``misleading'' and ``unrealistic'' with what it has proposed.
A decision on whether the Waimate District Council will continue to financially back its shareholding in a proposed irrigation scheme will be made on today, after hearing from the company wanting to build it.

Farmers have spent ''tens of thousands of dollars'' and considerable time on a plan to cut the irrigation take from the Maerewhenua River, an Environment Canterbury hearing was told in Oamaru yesterday.

A feasibility study to prove whether a new irrigation scheme in Waimate covering up to 40,000ha is viable can now start, after the Ministry of Primary Industries agreed to give $7 million over the next two years.
Farmers between Duntroon and Kurow are considering plans to upgrade their irrigation schemes and preliminary estimates for the work range from almost $30 million to $53.6 million.
"Clear support from the community'' buying shares in a new irrigation scheme for Waimate means it can now go to the next stage - assessing whether it is viable.

The announcement of a $750,000 grant from the Government's Irrigation Acceleration Fund for a Manuherikia irrigators' group is ''more than exciting'', it's ''really, really great news'', Central Otago Mayor Tony Lepper says.

The benefits North Otago communities continue to receive from local irrigation schemes have been highlighted to two Government Ministers.

The shift from state to community ownership of the Maniototo irrigation scheme amounted to an ''extraordinary and unexpected gift'' to the farming community, local farmer and irrigation veteran Geoff Crutchley says.

Tarras Water Ltd has withdrawn its second consecutive prospectus after failing to find a dry shareholder for its proposed $36.5 million Tarras irrigation scheme and may have to ''concede defeat''.

The Otago Regional Council's reversal of a panel recommendation not to invest in a Tarras irrigation scheme makes a ''mockery'' of the public consultation process, some submitters say.

The Otago Regional Council's approach to the funding request from Tarras Water Ltd means it faces minimal risk to its investment, Irrigation New Zealand chief executive Andrew Curtis says.
Another dry spell is making its presence felt in Otago as rivers drop to levels at which irrigation restrictions may soon be triggered.
Water and funding of irrigation schemes has been a contentious issue throughout Otago of late, specifically whether or not the Otago Regional and Central Otago District councils should support the Tarras Irrigation Scheme.
Irrigation is being blamed for intensifying flooding during heavy rain, raising issues about the long-term effects on roads, Waitaki District Council roading manager Michael Voss says in a report on the district's August floods.

Submissions on a proposal which could determine the future of irrigation projects in Central Otago close today.

A $7.2 million expansion of the North Otago Irrigation Company's scheme has started, providing water to another 800ha on the North Otago downlands.
The decision to allow high-country irrigation has been upheld in a landmark High Court decision for development of land in dry high-country catchments such as the Mackenzie Country.