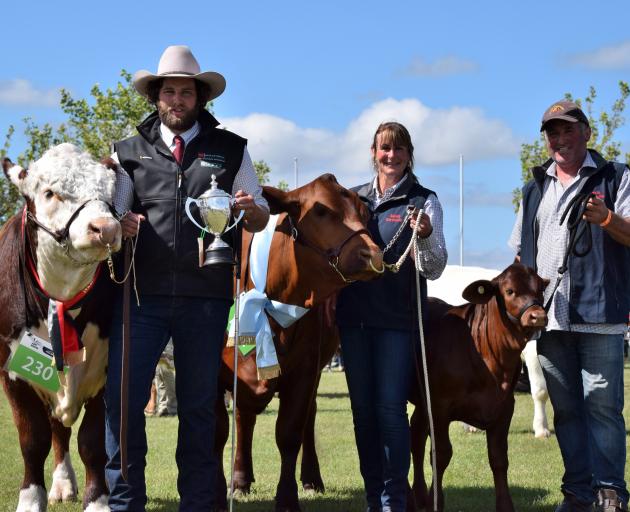 In 2017, the Gibson family become the only exhibitor to win both the senior and junior meat and wool cups in the same show at the New Zealand Agricultural Show in Christchurch. Pictured (from left) are Will, Liz and Anton Gibson. PHOTO AMY HOOGENBOOM
Will Gibson says when it comes to the potential yield from a breeding animal, size does not matter, and big is not always best.

For buyers at stock sales conditioned to the idea the biggest, healthiest-looking bulls and rams are their best bet when when buying livestock, he is swift to challenge them.

There is the chance that stud bull is not as as studly as he looks.

While he can explain the genetics and progeny testing of a potential sire, Mr Gibson also has a knack for breaking the science down into language everyone understands.

‘‘Basically it is what is hanging between their legs that matters — it’s the genetic material.

‘‘You need to look at the history, sometimes the smaller size animal is more productive.’’

Genetics is the key, and that is something the 26-year-old tries to impart on potential buyers and clients as the driving force behind his dual roles at Middlemarch-based stud Foulden Hill Genetics and as a consultant for neXtgen Agri — a job which, pre-lockdown and border closures, could take him to Australia for up to two months per year.

The Gibson family breeds Hereford and Santa Gertrudis cattle, along with merino and Suffolk sheep.

Covid-19 jitters and uncertainty were a factor in what he considered a poor showing at the Foulden Hill Genetics bull sale this month.

Five of his 13 Hereford bulls sold, while all three of the Santa Gertrudis bulls sold.

His Hereford stud, which he farms with his parents, Anton and Liz Gibson, started in 2009 when they moved from Hakataramea in South Canterbury to their 430ha farm in Middlemarch in Otago.

His parents started the Santa Gertrudis stud in 2004.

Mr Gibson chose Herefords because he had a passion for the breed.

He aims to breed hill-country Herefords with a strong emphasis on mothering and milking ability alongside growth and muscling with the goal of breeding true-to-type Hereford cattle. The factor of not being long established is not something he is going to let stand in his way, he said. ‘‘We are fairly new players, and I seem young but I have been thinking about breeding for a long time.’’ For Mr Gibson though, there is an element of impatience. ‘‘I need to realise it will happen and it doesn’t need to happen right away.’’

Mr Gibson started dabbling with a Hereford stud when he was 15, but the genesis of his interest in breeding started much earlier. ‘‘I was playing around breeding merinos since I was about 7. ‘‘I’ve always been really passionate about agriculture; it’s my job.’’

Where Mr Gibson takes it a step further than most farmers is that he looks at the animals to deliver the best possible returns. ‘‘It’s about doing it properly or not doing it at all and that’s what drives us as a business.’’ Due to the size of his stud, estimated breeding values or EBVs are something by which every stock unit has to be measured.

An EBV is a value which shows the difference between an individual animal and the herd or breed benchmark to which the animal is being compared.

The merinos are not all stud but are all identified and he has undertaken an artificial insemination programme across the flock for the past three years.

He described carrying that many heads of stock on 430ha as ‘‘relatively challenging’’.

‘‘We may not be massive in terms of size and numbers but we operate in a commercial environment.’’

That meant smart stock management and identifying which animals delivered in terms of progeny.

‘‘You can’t have a cow or a ewe not pulling her weight on a place of this size.

‘‘We do not have the space or the finances to keep that animal on; they’ve got to be producing to stay in the flock or herd.’’

His interest in genetics is largely self-taught and from learning on the job.

He studied marketing and commerce at Lincoln University, graduating with a degree in agricultural commerce, majoring in farm management with marketing as his minor.

While that taught him some business nouse it was his first job post-university with New Zealand Merino in Christchurch where he furthered his interest in genetics.
It was on the job he learned about progeny testing.

‘‘I became more motivated to learn about genetics because that is my passion.’’

And in his consultant role it is his job to help commercial farmers obtain the best returns.

Convincing farmers to consider the genetic background of stock was ‘‘a major decision’’, he said.

Learning who sired cattle or sheep was a big part of maximising on farm profitability per stock unit and he believes that is something to which farmers should pay more attention.

‘‘I offer a service and a product based on genetics.’’