Sheep owned by Queenstown police officer Julian Cahill, being moved by manager Roy Webb and his dogs stopped a car chase in January 2016— this photo wonformer Allied Press freelance photographer Blair Pattinson the Canon Media Award for Best News Photo in 2017. Photo: Blair Pattinson
He could have been a jockey, a vet, an All Black, an Olympian or a boxer. But it’s the high country that called Roy Webb’s name and the place he’s found the most joy in his life. He talks to Queenstown reporter Tracey Roxburgh about his time mustering and why one holiday in 30 years was enough.

Roy Webb extends his weathered hand and his eyes start sparkling and a cheeky smile lights up his face when I tell him he’s quite famous.

In 2016 he was the farmer responsible for stopping a police chase at Dalefield when a herd of sheep he was moving finally stopped a high-speed 80km, 90-minute police chase across Otago.

Many years ago, a visiting Japanese film crew decided he looked ‘‘just like the Marlboro Man’’ so made him sit in a little stable at Meadow Park, near Arrowtown, while the sun shone in and others blew smoke over him.

‘‘I’ve never smoked in my life. They probably made millions out of that.’’

Then in 1999 he was scouted by another film crew and ended up taking a starring role in a television advertisement for the America’s Cup village. 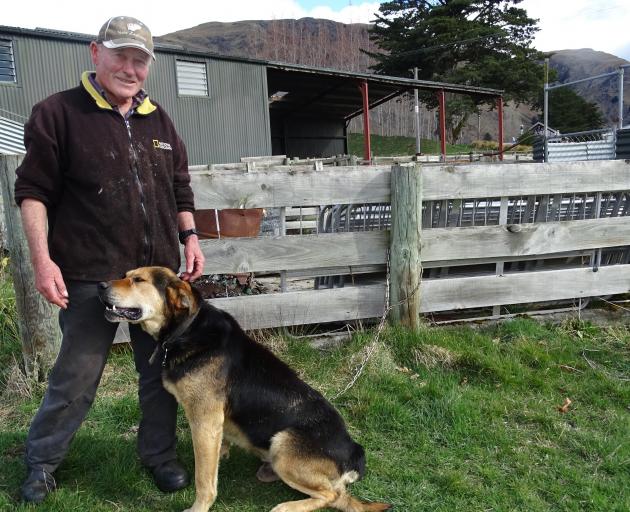 Sheep dog Brock with owner Roy Web during the 2015 Queens­town Winter Festival. PHOTO: ODT ARCHIVES
But it’s on a farm he’s most at home and where he’s spent, in one way or another, his entire working life.

Originally from Gore, he wanted to be a jockey.

His parents wanted him to be a vet.

‘‘But in those days you had to go to Australia for three years.

‘‘I used to wag school and go and get on the racehorses. So, that was the end of that.’’

At school he played rugby, despite being smaller than all the other boys, ‘‘loved the boxing’’ and had natural talent for athletics.

‘‘At school I could win all the races. If I got kicked out of class I’d join in with the athletics class.

‘‘Our coach, Johnny Borland, he’d been to the Olympics — he was a hammer thrower — and he said ‘Webb, give up rugby, you could go to the Olympic Games’.

‘‘But I was stupid really . . . I should have taken his word and stayed with athletics because when it comes to the cross-countries, I could just do it, easy.’’

Partly he puts that down to an early brush with death.

As a 5-year-old he was given a bike for his first day of school. 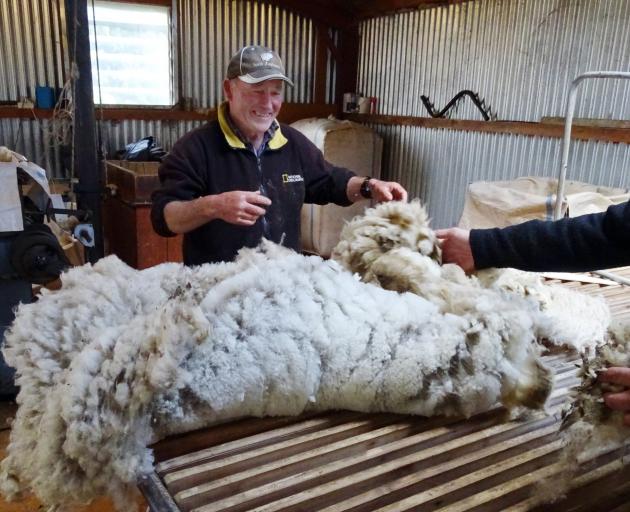 Queenstown farm manager Roy Webb deals with a freshly-shorn fleece. PHOTO: TRACEY ROXBURGH
On the way he was run over by a car. ‘‘I was under the car — the only reason the guy never killed me was ’cos I was so small.

‘‘I crawled out from under the car and he pulled the bike out.

Before Mr Webb left school, aged 15 — ‘‘I couldn’t get away soon enough’’ — his father purchased a farmlet.

His uncle had ‘‘about five million bloody hens’’ in Christchurch and his father wanted to follow suit.

But Mr Webb already discovered he had a natural knack for working dogs, having helped at the abattoirs and taking his friends’ dogs to take the sheep from the saleyards, about 8km away, back for the butchers.

‘‘I taught a foxy to work and she was as good as any bloody collie,’’ he said.

Given his ability on horseback, Mr Webb decided he’d have a go at mustering in the high country.

‘‘I got a few dogs together and ended up going to Kyeburn Station. That’s where I started off mustering . . . Ranfurly, Naseby and all the country in behind that — there’s three big runs in there, the Soldiers, the Old Syndicate and Kyeburn.’’

After a while, he became ‘‘a bit bored’’ despite loving the mustering lifestyle, working from hut to hut and sleeping on the ground.

‘‘I wanted to see more of the country, so I chucked that in.’’

Next he worked on Cattle Flat Station, in the Matukituki Valley, where he had a friend who had worked on the Gramipans in the Mackenzie Country, so ended up going there.

But Central Otago was calling his name, so he returned about 1962, initially working on Eastburn Station, but also mustering on Wentworth Station, Cone Peaks and Glenroy Station and Mt Soho, the latter always done at the end of May because owner Jack Dagg liked ‘‘a bit of snow down on the tops so he could have less musterers’’.

‘‘People don’t believe it, but those Cone Peaks over there, when I mustered there . . . I used to do the top beat.

‘‘We used to ride the horse up a wee bit and let them go and walk up from not far off the ground level.

‘‘I’d go right up and around those two high peaks and I’d be looking down at the lake in 40 minutes.

‘‘I had to wait on the other fellas — they had the shorter trip — to meet them on the other ridge. I’ve never been beaten walking up a hill yet, never.

After a few years, boredom again set in and, having heard from mates there was a lack of musterers in Nokomai, he headed down for a season there.

‘‘In those days I had 14 sheep dogs — seven for each day — because in the shingle country a dog’s feet used to get sore.’’

Then he and his dogs came back to do the Queenstown stations, added in Earnscleugh, Morven Hills and some in the Cardrona Valley.

After mustering at Earnscleugh for several years some of the older shepherds quit, so he was asked to stay on and take the lead job.

For 12 years he "sort of ran the place'' as head shepherd, where the sheep were all fine wool merinos, and - perhaps accidentally - became a highly-regarded farm manager.

Eventually the station sold, Mr Webb "chucked the dogs in'' and returned to Queenstown and decided to use his equestrian skills working on horse treks.

He started off with friends and started pony treks at the top of Skyline's Gondola in 1980 because there was nothing, in those days, to entertain children while there.

‘‘I had an old mate I used to muster with, Billy Mac, and he came over to give me a hand and he said ‘Christ, Roy, this is like horse-trekking on the moon’.

‘‘The poor bloody horses were looking down at all that water in the lake.

Did he get him back?

While there he met a Japanese man who ultimately ended up purchasing the Meadow Park stables, which he went on to manage.

He also spent six years ‘‘over the lake, there’’ running horse treks for Moonlight Stables and Real Journeys.

‘‘So, I managed that one for them and then I thought ‘I’m getting sick of this’. ‘‘I had a Japanese partner then and I said to her ‘what do you want to do?’

‘‘So I went down to bloody Tuturau for a year — it was too bloody wet and cold down there, no way.

As fortune would have it, he ran into Peter Egerton, who owned Goldfields in the Kawarau Gorge, who wanted Mr Webb to start up a horse-trekking operation there.

He took him up on the opportunity and, whenever he had time, he would help friend Peter Davenport who leased a lot of farm land around the Wakatipu.

A young employee used to do fencing, hay and baleage while Mr Webb did the stock work, but when the young worker quit ‘‘that started again from there’’.

And it hasn’t stopped since. When Mr Davenport ‘‘semi-retired’’, David Broomfield took over the land, which was leased to others to run sheep. ‘‘So that’s kept on from there.’’

He manages three blocks at the moment, but for 20 years was also farm manager for Mt Dewar Station, recently sold to Treespace.

That company plans a large-scale reforestation project — a 400ha beech forest — and a 55-lot subdivision on what was farmland.

Mr Webb said it was a sign of the times.

‘‘Some of those stations around here had 6000 sheep, merinos, . . . and they were one-man units except they needed someone to muster them in.

‘‘But now you go down the valley and it’s all in the grip of the grape, isn’t it?

‘‘That’s what I call people that are on the wine. ‘‘That was some of the best lucerne country in the world there.

‘‘What annoys me, too, is the country being retired — I used to muster on Glencoe and it’s bloody near all retired . . . the high country, Coronet Peak, in the back there in the valley, the Matuki, all in there, it’s wrong.’’

While retiring the farmland meant owners could get something settled to freehold, enabling subdivision, there would be consequences, Mr Webb said.

He uses recent high-country fires, in Skippers and in the Diamond Lake area, near Wanaka, as examples.

‘‘That’s going to happen again, but they won’t stop it.

‘‘There’s been no grazing in there for a few years — a few years on the same thing will happen again and they’ll never stop it, eight helicopters won’t stop it.’’

But Mr Webb said he reckons there’s no point in worrying about changes that are inevitable.

‘‘I’ve always said why bloody worry because we shoot dogs for worrying.

‘‘You’ll grow bloody old worrying about it — it’s going to happen, isn’t it, no matter what you do.

‘‘The amount that everyone complains about the town . . . it’s happening.

‘‘It’s changing and you can’t do anything about it.’’ Mr Webb’s clearly packed a lot of work history into his life, which begs the question, does he ever have a holiday? Not for 30 years. Does he want one?

It’s also clear Mr Webb’s got a lot more work in him yet and when that’s put to him, the eyes twinkle and the cheeky smile, always just a blink away, is back full-beam.