On a 100ha dairy farm at Seaward Downs, near Edendale, Mrs Morton runs about 40 Saanen goats in her Ardee stud.

Mrs Morton said the goats, like dogs, were ‘‘highly intelligent which can be really good or really bad’’.

Good because the goats could be trained but not so good if they opened gates or wandered to a place where there was food they liked.

‘‘If they find something good to eat they will be back there every day. They never forget.’’

Unlike cows, they did not need a lane to help them find their way .

‘‘They know it’s their shed so they just walk across the yard and go there.’’ 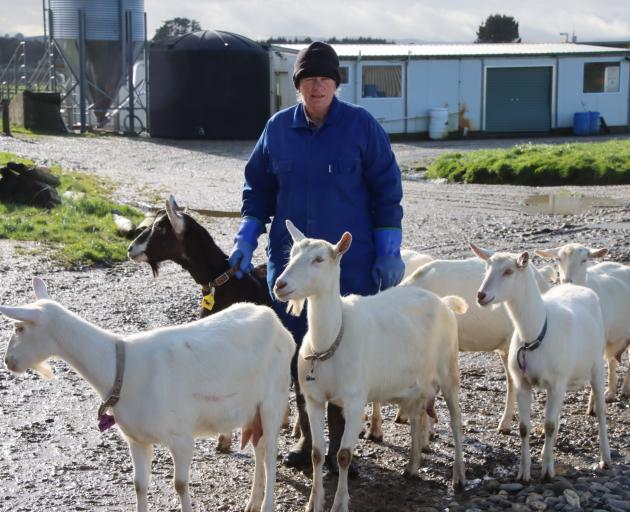 Donna Morton has trained her does to follow her across the yard into the paddock. Photo: Sandy Eggleston

Each goat had its own personality.

‘‘They have a number but they also have a name and for me they are part of my family.’’

She met her husband Ross online about 2007, when she was living in Morrinsville and began a friendship.

About 2011 Mr Morton bought what he thought were unmated Saanen does to eat the gorse on the property.

To his surprise the does all had kids.

During a visit south Mrs Morton, who was cow’s milk intolerant, drank the milk of one of the does whose kid had died.

When she went home she bought a doe which later became one of the founding does of the stud.

One of the older does in the stud, Bel Bonnie born in 2015, was the daughter of that doe.

In 2014 the couple married and Mrs Morton moved south later that year.

Goats browse on grass, only nibbling off the tops of the blades. Photo: Sandy Eggleston

When she first started breeding goats, she thought she knew a lot about them.

However, it was talking to other goat breeders that provided invaluable information about how to farm the animals.

That was why she always made herself available to help others starting out, she said.

At present Mrs Morton had 13 does and was building up the herd.

This year’s kidding had produced 12 more does and 10 bucks.

The doe kids would go to the buck in March. She did not keep many bucks for breeding purposes.

‘‘If you use the same buck on every doe you’ve got and he’s useless, you’ve gone backwards.’’

She preferred to put the bucks over different does to ‘‘interweave the genetics’’. Other does were inseminated with semen imported from France. 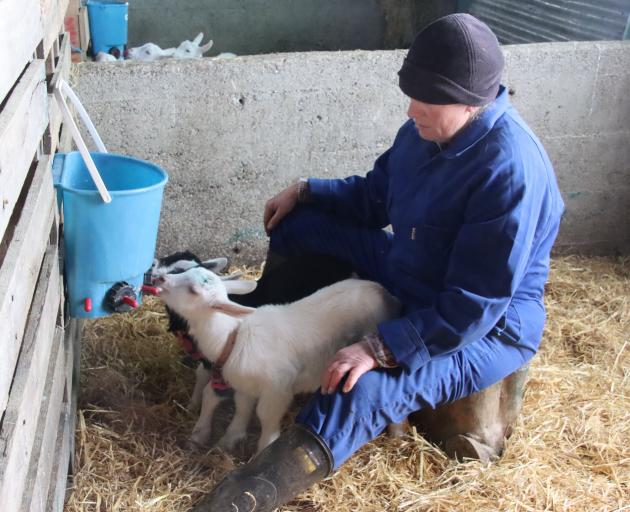 ‘‘The attraction was the different blood — it’s not necessarily better blood.’’

She was fussy about which animals she kept for milking and chose animals that had good width. This began with a broad muzzle.

‘‘If they have a good, wide face the rest of the animal will be, too.

‘‘If it’s got a skinny little mouth it can only eat so much food, whereas something with a big wide mouth can eat so much more.

‘‘Therefore she’ll have so much more milk.’’

Contrary to popular belief, goats did not solely eat weeds.

‘‘If you want to feed a top genetically bred milking doe and get the best out of her, you have to feed her milking quality rations.

‘‘That is a mixture of the weeds that she’ll want to eat and decent grass.’’

The first group of Donna Morton’s Ardee stud goats line up for milking. PHOTOS: SANDY EGGLESTON
A new milking shed was being built on the farm and she hoped it would be certified next year.

‘‘I want to get to the point where I put my milk in a vat and then it goes somewhere else for further processing.’’

The shed would be a twin lowline herringbone with six cups on each side. She was using the milk herself and feeding kids and lambs.

‘‘I normally dry them off the end of May so we get a break.’’

Goats’ milk needed to be treated carefully once it was taken from the goat.

‘‘Every time you pump it, it is bad. ‘‘It separates into fat globules really easily and it affects the taste.’’

The does took about six weeks to reach full production. At present the 13 does produced about 76 litres of milk each 24 hours.

Each goat averaged about 5.8 litres which was ‘‘insane’’.

‘‘That will decrease across the season.’’ Unlike cows, goats could produce for about three years before they kidded again.

Goats could provide three streams of income: milk, offspring and semen. There was a big demand for goat’s milk, even though it had not been marketed much.‘‘Cheese makers scream for it.’’

Goat’s milk was also good for babies who could not drink cow’s milk but was mostly available as milk powder, which sold for $70 a can, she said.

‘‘If you can buy fresh milk, at not much more than what you pay for cow milk in the shop, why would you not feed that?’’

Running goats can be easier on the environment than cows.

‘‘If you’ve got 500 goats in a shed you will have effluent but it’s not be sloppy like a cow.

‘‘It will be deep litter that can be composted.’’

Goats fed differently to cows and sheep, biting off only the top of the grass.

‘‘They’re a browsing animal, like deer, so if you watch them graze around a 10-acre paddock they’ll do about three circuits in a day.’’

While goats were susceptible to worms, when they shared pasture with cows the likelihood of goats ingesting worm eggs was reduced.

‘‘When the cows come through they wipe the paddock right down to the bottom and clean the pasture of the parasites that affect the goats.’’