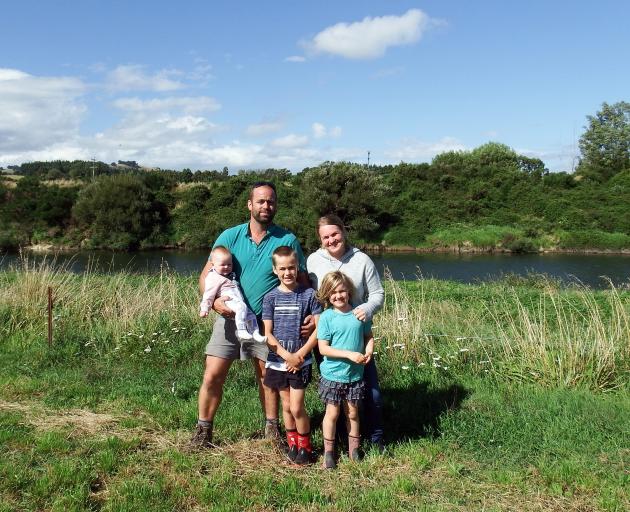 Jom and Birgit Pemberton are used to living in the proverbial fish bowl.

Their Southland dairy farm has main-road frontage, making it extremely visible for the passing public, while they also provide walking access through the property for fishermen.

But farming in the public eye was something Mr Pemberton was quite happy to do, saying it was a good driver for them. It was all about best practice.

Mr Pemberton is part of the Three Rivers Catchment Group which was formed to help keep farmers informed with all environmental issues and activities across the catchment area.

The couple, with children Beau (8), Miriam (6) and Anja (8 months), were in their fourth season on their Brydone farm.

It was the first dairy farm they had owned, having previously been involved in family dairy partnerships. 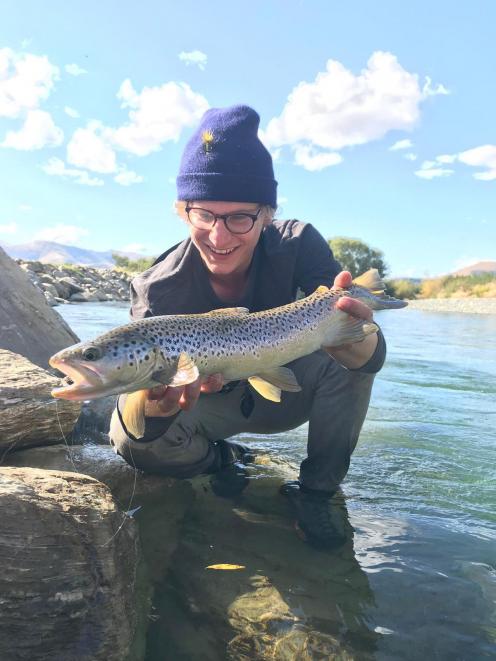 Karim Hadaya and a fish caught in the Mataura River. PHOTO: SUPPLIED
Their property included about 1km of frontage on to the Mataura River and it drew many regular anglers, including some from overseas.

The Pembertons maintained the road themselves to provide the access for fishermen and they received very positive comments from users who appreciated what they did. The local Scout group also visited several times a year so the scouts and cubs could go fishing.

Providing vehicle access was entirely voluntary and something that they did not have to do.

The only real issue they had was some tourists fishing out of season once. Otherwise they received plenty of positive feedback.

There were plenty of fish and the water clarity was excellent. Water sampling done from the river showed it was ‘‘definitely drinkable’’ and it had very low nitrates and very low E.coli.

Southland businessman and self-described chronic fly fisherman Matt Pettersson, who grew up in Gore, learned to fish on the Mataura River.

He was now catching as many fish as he did 20 years ago — ‘‘probably more’’, he quipped, saying he was now a better fisherman.

He fished the river via access from the Pemberton farm several times a month — more if he had time.

‘‘I don’t recall the last time I had a bad interaction with a farmer,’’ he said.

He fished the river every day for several hours, when he had free time, and caught a lot of fish which were in ‘‘perfect’’ condition.

Fishing in New Zealand was very different from the strictness around fishing in Austria and he enjoyed the freedom to go fishing in various rivers.

Mr Pemberton was frustrated at attacks on farmers by the likes of Fish & Game, saying there were many positive stories in rural communities.

Farmers were doing their best to get a return on investment, while also ‘‘protecting the future’’, yet it seemed that they were constantly getting slammed, he said.

‘‘I do love what I do. You’ve got to keep reminding yourself of that. It’d be quite easy to go ‘bugger it’ some days,’’ he said.

But he liked the lifestyle that it afforded his three young children, that many did not get access to. It was a great upbringing for them, and they loved getting in their kayaks.

There were some very real issues around how to manage the environment — it was never ‘‘black and white’’, he said.

He supported keeping stock out of waterways but fishermen had commented that it was harder to access fishing spots than 20 or 30 years ago.

Fencing of waterways helped with sediment loss, but could lead to bank erosion due to the long grass. Traditional sheep farming had ensured the stability of banks.

And then there were the weeds that grew through it not being grazed. So it was a difficult one, he said.

Costs went up — not just for farmers but also for the regional council, in keeping the river in order, weeds at bay and willows under control.

Positive goal but difficult to achieve results to please all