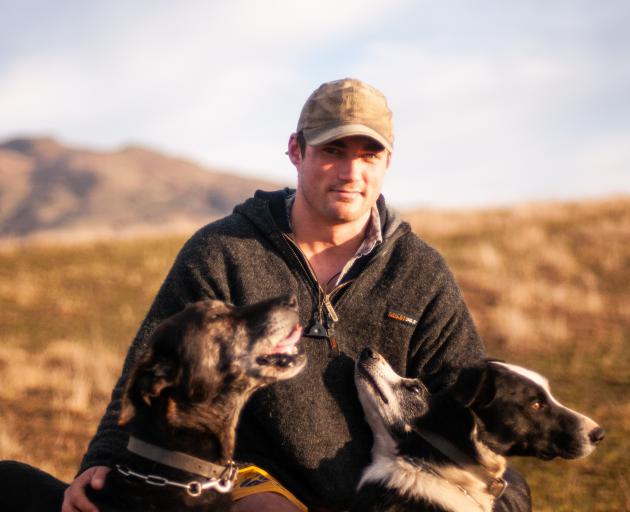 Ben Maxwell with some of his dogs. Mr Maxwell has traded Invercargill for farming in the Lindis Pass where he is head shepherd at Longacre Station. PHOTOS: SHANNON THOMSON
Ben Maxwell could be described as a throwback to a different era, one where the best rugby players were weaned on the land.

Except the 25-year-old former Southlander’s journey to a career in farming and path towards becoming a handy player has not followed that playbook.

Born and raised in a city — Invercargill — his aspirations to become a farmer were forged by his extended family.

‘‘Dad’s father had a farm just out at Gorge Rd [outside Invercargill], and my uncle has a farm.

‘‘My uncle on my mother’s side is a lamb drafter, so I was always out with them getting around.’’

The seeds were sown and farming beckoned

He has a laidback way of describing his journey to becoming head shepherd at the 3340ha Longacre Station in the Lindis Valley, north of Tarras, and captaining Central Otago premier club rugby champions the Cromwell Goats.

The former James Hargest High School pupil said the school was ‘‘not known for its rugby’’.

‘‘If you wanted to excel at the game you probably had to go Southland Boys’ [High School].’’

While his rugby potential was still to be tapped, he was plugging away with his rural aspirations.

Ben Maxwell with some of his dogs. Mr Maxwell has traded Invercargill for farming in the Lindis Pass where he is head shepherd at Longacre Station. PHOTOS: SHANNON THOMSON
After leaving school he found what he described as a ‘‘fairly profitable wee business for a young fella’’ — shearing and crutching.

That involved trips just outside of the city, often to lifestyle blocks.

‘‘They might have had five or six sheep, but I’d charge $20 per sheep — it could pay really well.

‘‘Plus I got to keep the fleece and wool prices were a lot better then.’’

Six years ago it was a 230km move up country to Cromwell that enabled Mr Maxwell to really find his feet in the high country and on the rugby field.

Initially, the reason was to study the national certificate in farming skills at Otago Polytechnic’s Cromwell Campus.

The course was practical, something he appreciated, meaning he could hone his shearing skills and get up into the hills to muster and work with livestock.

‘‘They put you out on placement a lot, a lot of face-to-face with farmers and trying to get you a job.’’

It worked. Eight months after completing the course, Mr Maxwell was installed as shepherd at the 6000ha Carrick Station.

It was here rugby and farming converged.

‘‘It was pretty much a condition of the job if you worked at Carrick Station.

(He was quick to differentiate this Don Clark, who was in the team in 1964, from goalkicking maestro Don Clarke (with an ‘‘e’’) — who was otherwise known in the national vernacular as ‘‘The Boot’’).

He started with the Goats when they were ‘‘not much chop’’ but the side seemed to appreciate his arrival.

The team has been in the Central Otago premier club rugby final five times in the past six years, the past four years with Mr Maxwell at the helm in the No 9 jersey and he now serves as the team’s goalkicker. The team again took the spoils in the competition in July. His association with the club continued beyond Carrick Station which he left after five years to take up his position at Longacre.

While both were stations, the operation at Longacre was ‘‘very different from what I was used to for five years’’.

At Longacre, where he has been for the past nine months, those numbers have ramped up with three different classes of ewe, about 5700 Merino ewes, 5000 Merino lambs, 350 ultra fine wethers, 200 composite cows and the same number of calves, and some ‘‘Inverinos’’ which carry the Inverdale gene leading to higher lambing percentages. The intensive work of Longacre constantly challenges him. It also keeps him grounded. Mr Maxwell’s farming goals are realistic. He realises owning a farm might be a pipe dream but does not rule that out ‘‘if the card falls right’’.

For now his long-term goal is to manage a high country farm. That means a return to Southland is not on the cards anytime soon.

‘‘I like the hill country stuff, just cruising around with a team of dogs, doing the mustering.’’