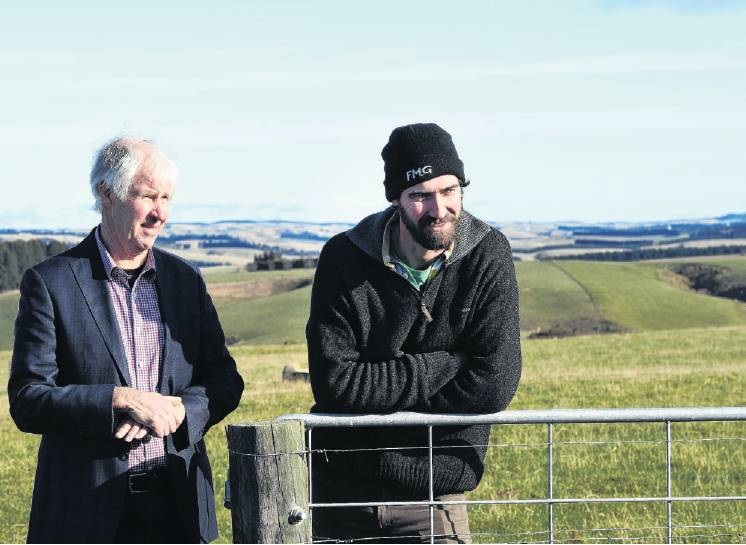 James and Samuel Reid farm Minchmoor Farm near Outram. Photo: Stephen Jaquiery
How many people does it take to run a farm?

James and Samuel Reid, from Minchmoor Farm, near Outram, found that out when they hosted a function for those involved with the property.

Originally, the plan was to thank logging and roading crews working on the property, and also the Minchmoor team for working over Covid-19 lockdown.

Then they got thinking about who it was that helped them keep the farm running — or ‘‘doing the doing’’ as Samuel put it — and their list continued to grow.

From stock agents to tractor mechanics, it quickly reached more than 100 people, which surprised them. Often farming was regarded as quite a solitary or isolated profession but when it came to the number of people required to run an operation, it really was a team effort, Samuel said.

They also had some archival footage of lime being spread on the property in 1958; relationships could span up to three or four generations — ‘‘that’s pretty special too.’’

It had been unprecedented times through Level 4 and 3 and it had been ‘‘bloody good’’ to be involved in the agricultural industry, Samuel said.

While it might seem ‘‘a bit of a cliche’’ about farming being the backbone of New Zealand’s economy, considering all the people gathered at Minchmoor Farm, involved in one operation, that illustrated the reach through the economy, he said.

The luncheon was held in Minchmoor’s new woolshed and, as he surveyed those attending, James Reid said: ‘‘This is really what it is about, this is the people that it takes to make a farm operate’’.

It also reaffirmed the value of family-run businesses to the New Zealand economy, he said.

This was a very interesting article.
It puts paid to the myth that farming is the backbone of the country. If you are going to use a backbone metaphor, then farming is just one of the vertebrae in it. All the other trades, professions, and skills involved make up the other vertebrae and it is the whole that gives strength to our country, not any single part of it. If one vertebrae fails, then the entire backbone collapses.
It could also be likened to a chain. No-one can identify the most important link in a chain. if the chain is to work, then all links rely on the others to do their job and if one link fails the chain is worthless.
An excellent article. Thank you.