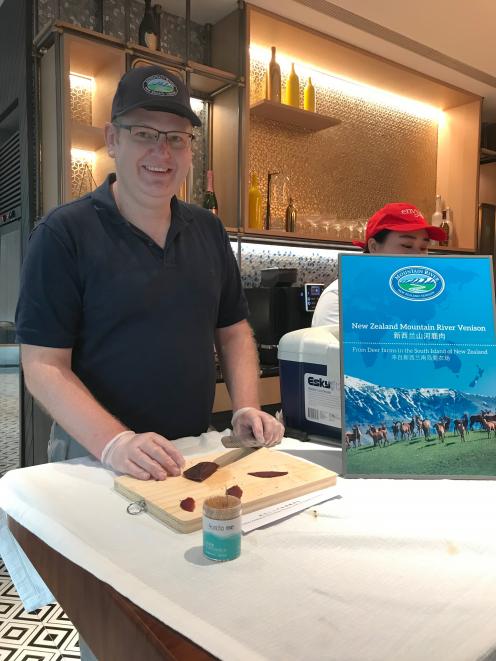 Hunter McGregor at a recent Mountain River Venison presentation in Shanghai. Photo: Supplied
When Hunter McGregor established a business in China four years ago, it was pioneering stuff.

There was no market for venison in China and so it had been about creating both interest and demand for the product - "because it doesn't sell itself".

What he has also found is that running a business in China is getting harder. And that, quite simply, was "because it's China". "It's the way things are," he said.

Mr McGregor, his wife and their two young children have been back in his home turf of Otago this month, visiting family and enjoying a Kiwi holiday.

Brought up at Roxburgh - his parents had an orchard and founded Benger Gold juice and his father Bruce also managed Deer Improvement - he boarded at Otago Boys' High School before completing a marketing degree at the University of Otago.

After graduating, he headed overseas in 2001 and had never returned, apart from holidays. Initially, he headed to Perth where he worked for the Western Australian Meat Marketing Co-operative Ltd (WAMMCO) for several years. From there, he spent three and a-half years in Korea before moving to China in 2007.

Describing himself as "hopeless" at languages, it took about two months before people could understand what he was saying but he had both the time and motivation to attend Mandarin classes.

After working for the New Zealand Government at Expo 2010 in Shanghai, Mr McGregor decided he did not want to continue teaching English - he wanted to get into business.

That was an interesting time and gave him an understanding of how things worked in China and what was needed to be successful there.

After working for one of the distributors of the sheep milk powder, the opportunity arose to work with Mountain River Venison. The first container of venison arrived about the same time as the birth of his first child four years ago.

He was responsible for sales and he had a small but growing team looking after the logistics. His company dealt directly with top hotels and restaurants China-wide, with most of its sales in Shanghai.

The business could easily scale because logistics was something that could be controlled. By listening to the market every day, he was able to tweak and adjust product to what the demand was for.

Mr McGregor was passionate about the Mountain River product and wanted it to perform well, growing the business.

He took immense pride in presenting it to a chef in a form that they wanted. The most important things to consider were quality, price and consistency of supply, he said.

Chinese consumers were becoming more adventurous and the consumers he was targeting were increasingly well travelled and open to new experiences.

"Hopefully, with our product and a good chef, it's a great experience for them," he said.

While there seemed to be some negativity towards New Zealand's farming systems, they were, in fact, "pretty damn good" and also transparent.

Later this year, Mr McGregor had arranged for a group of China-based foreign chefs to visit deer farms in New Zealand while they were on holiday and New Zealand farmers were always open to visitors.

China was now "home" for Mr McGregor and while he missed a lot of things including New Zealand food when he first arrived, the only thing he could not get in China now was custard squares. "Everything else I can get at a price," he said.

He enjoyed the lifestyles both countries afforded - "I sit in both camps" - and could "happily switch between the two".

While it was getting more difficult to do business in China, that was nothing to do with the New Zealand-China relationship - it was "just how China is". And many of the issues and challenges were no different from anywhere else in the world, he believed.

All he could do was control those things that he could control and "try to do it better". When he first established his business, there were plenty of roadblocks which he had to solve - there was "no-one to pick up the phone and say: `How do you do that?".

Everything was so much faster in China; "one of the frustrations of communicating with New Zealand people it they are really slow, incredibly slow. Over there, it's instant," he said.

Mr McGregor - who enjoyed working with other New Zealand companies for promotions - could see lots of opportunities in China.

"I enjoy what I do. Sleeping is optional," he quipped.