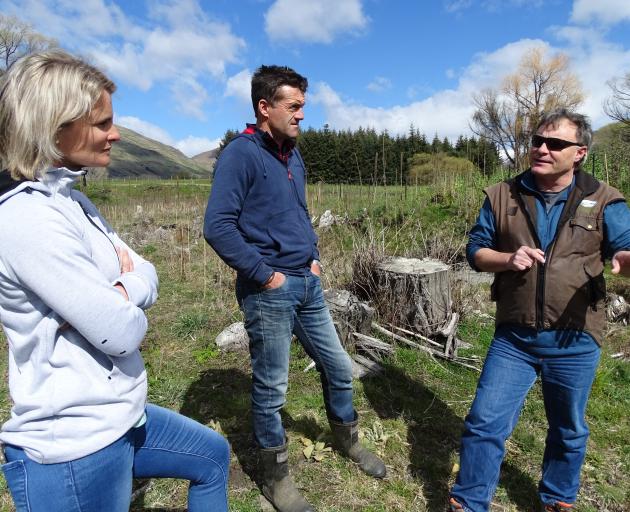 Keeping Lake Wanaka pristine for future generations is on the wish list for many of us, and that includes the majority of high-country farmers whose properties lie within the lake catchment. Kerrie Waterworth reports on farmer-funded efforts to create wetlands and prevent agricultural and nutrient runoff from entering the lake.

‘‘Not a lot of work had been done with high country farmers on environmental issues, as a farm type. High-country stations had kind of been left to themselves.’’

During the project, he implemented a land environment plan linked with farm profitability scenarios at both Mt Aspiring and Mt Burke stations which ‘‘kicked off’’ a discussion with Mt Burke Station manager Grant Ruddenklau and Mt Aspiring Station owners Randall and Allison Aspinall.

Alpha Burn owners Duncan and Allannah McRae finding time to plant natives beside Alpha Burn creek on their 24/7 beef, lamb and deer high country station. Photo: Kerrie Waterworth
‘‘Grant, Randall and I were having a conversation about the value of farm plans and a growing focus on environmental issues around Lake Wanaka. Frankly, we all saw it made sense to widen the scope of the project to the whole catchment and work with as many stations as we could.’’

Mr Ruddenklau took the lead and, with the support of Mr Arbuckle and Mr Aspinall, set up the Wanaka Catchment Group, a farmer funded approach to catchment management.

So far, 12 out of the 17 farms and properties (greater than 50ha) within the Lake Wanaka catchment have signed up to the collective, the main purpose being to implement a consistent framework for environmental management throughout the farmed catchment, encourage landholders to adopt practices which reduce environmental losses and to build a better understanding with the Wanaka community around what is being done to manage their effect on the environment.

The 2,300ha Mt Aspiring high-country station 40km from Wanaka has new wetlands created as a direct outcome of the land environment plan. One is at the start of the popular Wishbone Falls walking track.

‘‘It was logical to do it from a water quality point of view and it is also a beautification, and it shows we are engaged,’’ Mr Aspinall said. 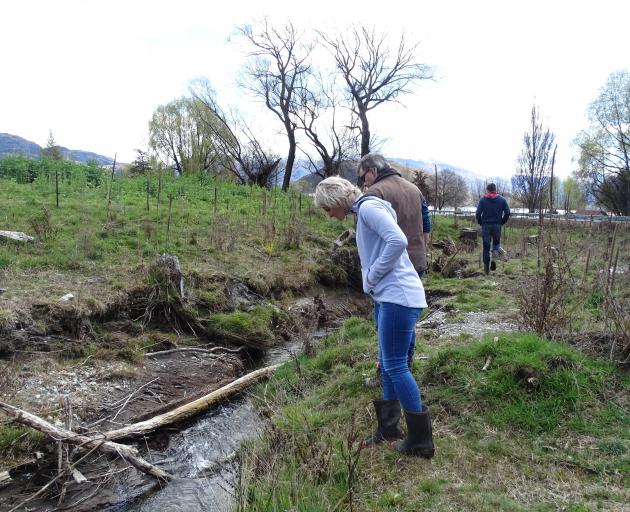 Spawning trout are easy to spot in the creek since the willows have gone. Photo: Kerrie Waterworth
Twelve months ago Te Kakano volunteers helped create the wetland by planting hundreds of native plants.

‘‘Ours is a sort of semi-wetland. It collects runoff from paddocks and filters it before it hits the actual creek. So, there were definite advantages in creating it already but we could be talking five years before the plants are big enough to be fully effective.’’

Mr Aspinall said there were plans to create more wetlands, particularly in wet areas such as the bottom of paddocks ‘‘where it was not ideal to have stock especially when you are winter cropping’’.

The 4,500ha Alpha Burn high country beef, sheep and deer farm on the southern shores of Lake Wanaka and on the road to Treble Cone ski field is named after the Alpha Burn creek. The creek flows through the property into Glendhu Bay campground where it enters Lake Wanaka. Owners Duncan and Allannah McRae are members of the Wanaka Catchment Group but have been planting trees for more than a decade.

‘‘We love where we live and we like it to look good. That’s why we planted trees, that’s why Duncan’s parents and grandparents planted trees. We are doing it for the next generation. We believe we are guardians of it for our family, it is quite an emotional topic for us as it is not just a business it is our life, our history,’’ Mrs McRae said.

Mr Arbuckle takes his hat off to ‘‘farm leaders’’ such as Mr and Mrs McRae getting involved in the Wanaka Catchment Group because ‘‘it has opened up their farms to even greater scrutiny’’.

More than 100,000 people pass through the high-country stations on their way to some of the most popular walking tracks in the region. 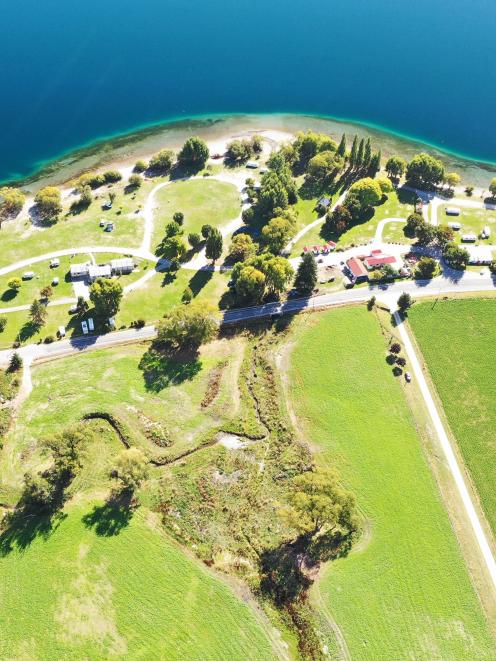 Aerial view of riparian planting beside the Alpha Burn creek which crosses the Glendhu Bay campground before entering Glendhu Bay. PHOTOS: CHRIS ARBUCKLE
Mr McRae said up until about three years ago, people used to love to see cows in the middle of a river and would stop and take a photo.

‘‘Now the Otago Regional Council gets hundreds of phone calls a year from people who see a cow on our property, Randall’s property or anyone else’s with a river, even though it is allowed and has no measureable effect at such low numbers’’ he said.

Rather than being ‘‘talked at one by one’’ by the regional council, Fish and Game, or Forest and Bird, they joined the catchment group.

‘‘We are all on the same page and if we have any issues we can learn about them and share advice,’’ Mr McRae said.

The McRaes have completed stage one of their five-year Land Environment Plan and are about to start stage two. In partnership with the regional council they recently paid $30,000 for a digger to clear the willow trees from the creek, then spent nearly $12,000 to fence the wetland and in a joint initiative with Te Kakano native plant nursery and Million Metres and the Wanaka Water Project plan to have 1800 native plants inside the fenced wetlands at an average cost of $6.75 per plant.

It is a cost the McRaes have had to ‘‘suck out’’ out of their farm budget.

That is a sore point for Mr McRae who believes farmers would be more ‘‘incentivised’’ to plant trees if they received the same subsidies paid to foreign companies to plant trees through the New Zealand Emissions Trading Scheme. ‘‘It’s a nobrainer.’’ The good news is having a catchment group in place and advanced farm plans under way has meant these high-country stations are ahead of some of the changes proposed in the 2019 Draft National Policy Statement for Freshwater Management.

‘‘We are lucky that we are one step ahead and that we havehad Chris basically supporting us and giving us the background on these new regulations. If we didn’t it would be terrifying,’’ Mrs McRae said.

That fear was evident at a Ministry for the Environment ‘‘Action for Waterways’’ meeting in Queenstown Mr Arbuckle attended recently.

‘‘A number of farmers stood up and spoke very emotively that New Zealand is going to go broke and farming will be gone from the landscape, but I don’t personally believe that, especially if we champion initiatives like the WCG.’’

‘‘However, for policies to be effective, this Government needs to incentivise and support the proposed policy changes with a lot more education on the farm, and this is where they can also utilise the practical learnings groups like the Wanaka Catchment Group have to share. We can lessen the fear and show Government how these changes implement, how it will directly affect high-country farmers like Duncan, Randall and Grant, in their environment and for their businesses,’’ Mr Arbuckle said.

Mr McRae and Mr Aspinall hope that eventually the remaining Lake Wanaka and Lake Hawea catchment farms not in the collective will come on board.

‘‘That gives farmers even greater scope to work with the wider community and show we are trying to include the environment as part of our every-day decisions’’Mr Aspinall said.

The Wanaka Water Project and Te Kakano would love to hear from any other landowners or community groups interested in riparian planting on their property.