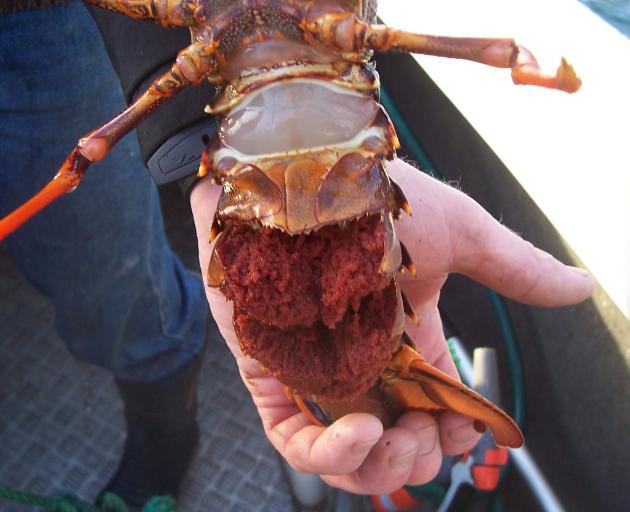 The value of the landed catch from CRA8 is estimated to be $122.4 million. PHOTO: SUPPLIED
With a focus on sustainability and profitability, a southern rock lobster industry leader says the work they have done this year has been vindicated.

There are nine rock lobster quota management areas —the southern area is CRA8.

It covers South Westland, Fiordland, Stewart Island and around to the Catlins.

The association comprised fishermen, quota owners and processor exporters. It came under the auspices of the New Zealand Rock Lobster Industry Council.

‘‘Now that was necessary but very serious as far as the industry was concerned because it essentially meant quite a few fishermen no longer had an economic amount of quota left.’’

However, those cuts enabled the fishery to prosper. By 2007 it was assessed as being sustainable once more.

Mr Lawson said the management approach taken now was to achieve the maximum economic yield from the fishery.

That was done by having a large biomass, ‘‘well above the level of sustainability’’, with a conservative quota level.

Fishing lightly allowed for the required number to be harvested as needed. China was the biggest export market and specific times of year demanded higher export quantities and sizes.

There were about 70 operators fishing for rock lobster in the CRA8 area. Mr Lawson was proud the fishery was in such a good state and that the industry supported the conservative approach to quotas.

The association also invested in research aimed at improving the handling practices and, ultimately, the quality of the exported lobsters.

Winning the operational innovation award at the New Zealand Seafood Sustainability Awards in August was vindication of its work.

While the New Zealand — and global — economy has taken a hit with the impacts of Covid-19, the rock lobster industry first felt the blow in January when China closed its markets.

Perhaps surprisingly, exports out of CRA8 reached a record in May.

‘‘Its amazing how it bounced back; there was obviously pent-up demand in China.’’

CRA8 produced about 40% of New Zealand’s production of rock lobster — the largest area.

Mr Lawson called it the most economically valuable area across any of the in-shore fisheries.

Times of high demand were good, but the industry faced challenges.

An example was when exports stopped once more in June, when traces of Covid-19 were found at a seafood market in China.

Another challenge was that there was not a big domestic market — this was shown over the lockdown period when exporters were fully stocked and needed to sell to somewhere which was not China.