They make it look so easy.

Holding a full-grown sheep still, while calmly running a handpiece over their bodies giving them their annual haircut.

The goal is to get the thick fleece off in one piece, using 36, or fewer, ‘‘blows’’, which is a single sweeping cut.

There’s a lovely lady on the ground, lying quietly, three-quarters of the way through her cut, when the handpiece is given to me.

She’s someone’s pet and has been through this process about three times now, which is possibly why she’s so chilled about her current situation.

Ironically I (semi) trained to be a hairdresser in a past life, but I jacked it in before I got taught how to properly use scissors.

And a handpiece is an entirely different beast.

I’m told to squeeze her neck with my knees and push my fist into her hip to help keep her still while I shear her posterior and leg. 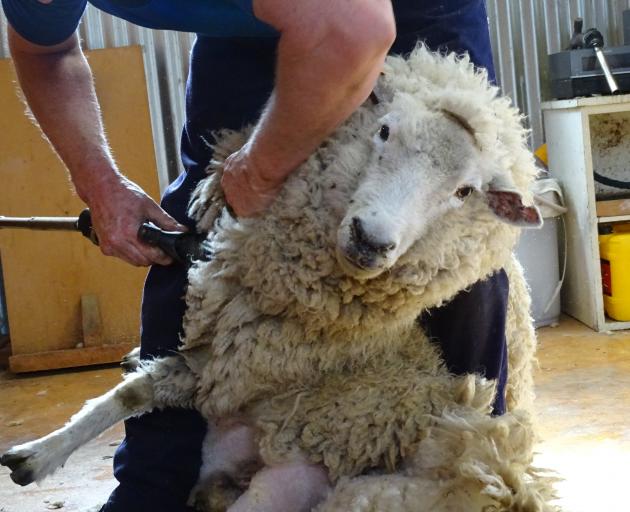 A pet sheep goes in for her annual haircut by a professional, before Queenstown reporter Tracey Roxburgh had a go on the handpiece. PHOTO: TRACEY ROXBURGH
I’d like to have a chat with her first to put her at ease, know her name, feed her some treats, build up that all-important rapport with a stylist.

But time’s money when you’re shearing and there’s a clicker there counting every single sheep that comes out of the holding pen . . . and, I’m told, a bit of friendly competition every now and then between shearers.

So, gammy as they come, I assume the position and apologise quietly to my new friend (I’ve decided to name her Lady) for what’s about to happen.

The first problem I encounter is my arm doesn’t seem quite long enough to get my fist into the right place on her hip . . . and I can’t seem to work out how to keep Lady’s little neck in place between my knees while also leaning over more.

Oh, and I’m not flexible enough to actually bend that far anyway.

Luckily, help’s at hand to hold my little ovine steady as the cord is pulled and the handpiece roars to life.

Here’s the next problem.

The handpiece is hot and vibrates like nobody’s business, so trying to hold it steady against skin is no mean feat . . . and if you’re not careful (and I wasn’t) the handpiece actually takes control of your hand, which starts shaking uncontrollably.

And, because you’ve got a ewe’s neck between your knees and your fist (kind of) in her hip, to adjust your grip is impossible, and moving to turn the machine off would mean letting a three-quarter shorn sheep run free . . . with her wool trailing behind her.

I fear that’s something I would never live down.

So, I alerted my teachers I needed assistance by staring at my shaky hand making an ‘‘ooooooh!’’ noise repeatedly until someone else turned the machine off.

Round two begins and I have the shakes — I’m not entirely sure if it’s the vibration from the handpiece still coursing through my body, or the rising sense of panic I’m starting to feel about not hurting Lady.

There’s a proper art to this shearing caper.

For example, you’ve got to be quite careful around the hamstrings of the sheep because, I’m told, you can actually cut them if you’re not careful.

It took me three minutes to complete about six blows.

That works out at one completely shorn sheep in just over a minute.

Fortunately, one of my teachers took over the last part of Lady’s haircut as I stood there, still with a vibrating hand, saying thank you for being a good girl, while wondering how people do this so fast and spend eight hours a day doing it.

Didn’t cut her though, so maybe there’s hope for me yet.