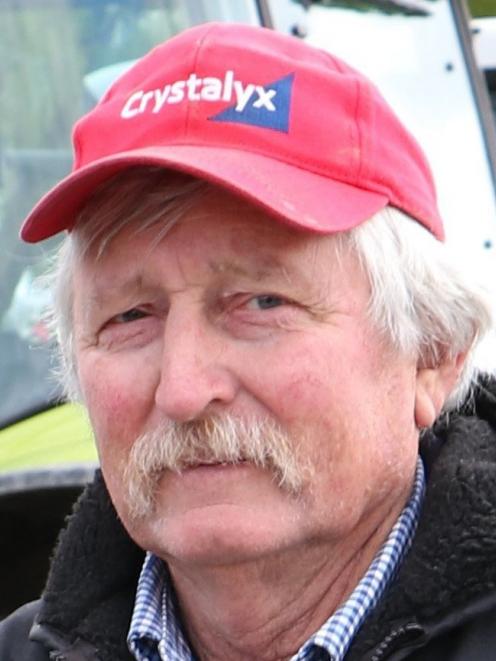 Laurie Paterson. Photo: Sandy Eggleston
They are calling it The Mother of All Protests.

Groundswell New Zealand has announced its next protest will be held on Sunday, November 21.

In July, convoys of thousands of tractors and utes took part in the rural group’s national Howl of a Protest event, protesting against what the rural sector says are unworkable government regulations.

Its Enough is Enough message, outlining the group’s concerns, was delivered at the protests, giving the Government a month to address the issues, or it said it would take further action.

For The Mother of All Protests, participants are being asked to travel into their local town, big or small, to be there at 1pm. The Groundswell statement will be played on the radio at 1.35pm.

The group said it was about standing against the unworkable regulations that were impacting the rural sector, saying it was time to unite and force the Government to take notice "and acknowledge the groundswell".

It would also help build momentum towards the Groundswell Gathering that would be held at Parliament in February.

Groundswell co-founder Laurie Paterson said the group had not had any correspondence from Prime Minister Jacinda Ardern.

He believed the November protests would be "bigger and better" than the July event. Truckies wanted to join in which was why a Sunday was chosen as that suited them.

He was confident about the level of support, saying he been talking to many people who were "ready to go and actually want to do something". "People are just so frustrated," he said.

Asked what would happen if there was a change in Covid-19 alert levels, Mr Paterson said they would approach that when needed.

Groundswell’s Can You Hear Us events — where the group called for two minutes’ show of support by horn tooting in support of the campaign for four consecutive Fridays — was affected by lockdown with people unable to travel into towns for it.

The group was also writing to all councils calling for a halt to all Resource Management Act planning processes, citing the significant negative impact zonings such as significant natural areas, wetlands and landscapes were having on people and their property values.

It also called on landowners to decline access for councils or their agents wanting to undertake mapping or information gathering.

Agriculture Minister Damien O’Connor has previously said the Government was listening to farmers and had heard the concerns raised.

For “unworkable” read expensive and no govt subsidy to help them pay for it.
Let’s not forget that farmers had absolutely no difficulty finding the capital to make the changes that have caused the problems that the new regulations are aimed at fixing.
They’ve happily pocketed the huge profits they’ve made over the last 30 years and now they are having a tanty because they are expected to pay for the repairs to their vandalism.

Huge? define "huge", the only ones making huge profits are the supermarkets allowed to remain open during lockdowns, as for this "vandalism" you talk about, where is your links to prove such....

Huge is anything over a 10% return on capital investment. Most dairy farmers are tripling that, huge by anyone's definition. Vandalism... read any rural local authority report on water quality. Better still, go out to your nearest farmland stream and drink a few glassfuls straight from the stream.

Hey farmers, why not bring some cow pats with you to throw around the towns you plan to visit. It's better than throwing it in the rivers.

urban environments cause as much harm to the waterways as farming, as exhibited by your comments

The large cities and their populations existed 25 years ago alongside relatively clean waterways. The massive increase in river pollution has coincided with the increase in intensive dairying over that same period. Go figure.

Ignorant comments like that add nothing to the debate, and detract from your message if you're an environmentalist....

Ignorant I may be . but you won't find me driving a huge tractor down Princess St. anytime soon. Unless it's for the Santa Parade.

I wish them well mother of all protests. it's sad when a normal protest doesn't help.

Been listening to this bleating forever. Just hope some reflection will make the farmers involved see their so called good stewardship is just a smoke screen to hide the poor practices of a few. Trouble is, a few is all you need to destroy waterways and trash good land. Intensive farming that ruins the country should be a thing of the past while innovation and environmental protection on the highest level should be championed in my view.

The MOAP.
If you don't do what they say,
it'll be the OO. Other Operation.
A little bit grandiose. Still, better Laurie than an Advance NZ agitator. As you know, The PM has a lot on. How about the Min Primary Ind?