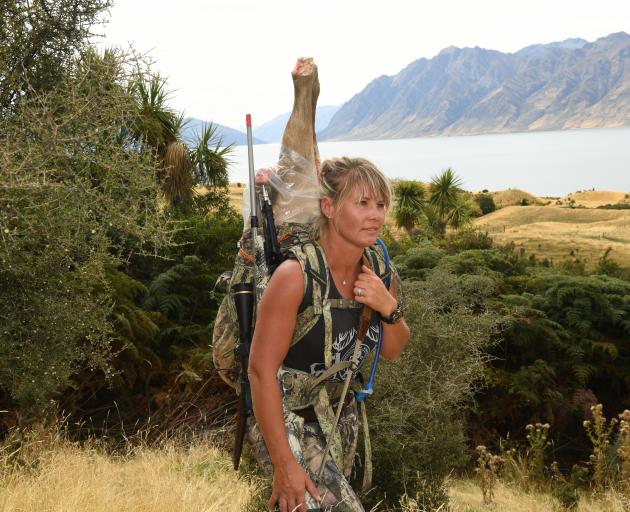 Hunting guide Stacey Shuker lugs out meat from a client's trophy stag. Photo: Stephen Jaquiery
Hawea-based Stacey Shuker is one of only a handful of qualified female hunting guides in New Zealand. She talks to Sally Rae about life in the hills.

The Hawea woman reckons that is probably why she has done some "cool things" throughout her career.

Growing up, she had notions of becoming a marine biologist, but that never eventuated. Instead, she ended up owning a restaurant and worked as a jeweller for Michael Hill.

Now, the diminutive mother-of-two is working in a job about as far removed from the glitz of the jewellery trade imaginable.

Mrs Shuker (45) is a hunting guide on Glen Dene Station, spending five months of the year on the hills above Lake Hawea helping clients achieve their trophy-hunting ambitions.

It is a physically-demanding occupation, but one that would appear to be the perfect fit for an outdoors-loving, hunting-mad jack-of-all-trades.

"I like change. I think that's why I've done some cool ... things. I don't mind change at all and I like to challenge myself," she said.

One of only a handful of qualified female guides in New Zealand, Mrs Shuker moved to Hawea 11 years ago with her jeweller husband Jimmy.

She was originally from Whangarei. Her father was a keen hunter and she was brought up amid a lifestyle of hunting, fishing and camping. "It's just in my genetics, really," she said.

She introduced her husband to hunting - he was a keen surfer - and got him hooked, while their children Bailey (13) and Hunter (11) were also both crazy about the outdoors.

The move to Central Otago meant hunting was suddenly on the family's back-doorstep, instead of necessitating the travel she had made for it in the past.

"We just love living here and enjoying our back door. Our backyard is pretty epic, we're ... lucky," she said.

Mrs Shuker has worked for Richard and Sarah Burdon, from Glen Dene, for about nine years. Initially, she was doing some cleaning, and she has now been guiding for the past five.

When it came to being a good guide, being "a natural" on the hill was a key requirement, she said. 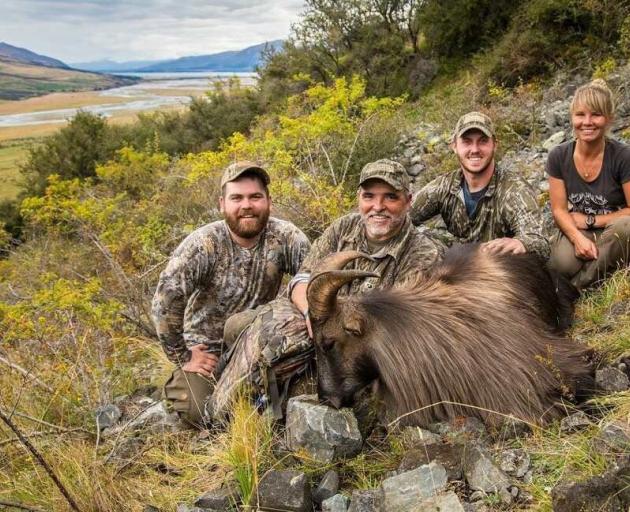 Stacey Shuker and clients after a successful tahr hunt. Photo: Glen Dene Hunting
Mr Burdon was also very good at matching clients with guides and she usually got on "like a house on fire" with her charges.

"Most people that are into the outdoors, we all have a similar outlook on life. We're hunter-gatherers, we want to use what we're killing," she said.

Compared to her male counterparts, it was harder work for Mrs Shuker to get an animal off the hill after a successful hunt.

She had to break down the carcass so she could carry the back legs and back-straps down in a backpack - and usually her rifle - and then she usually had to return for the head and shoulders.

It was no mean effort for her 60kg frame to be carrying a 400kg stag, but she relished the physical challenge of the job.

"I like pushing myself. I always try to carry a little bit more than I have before. That's the part I enjoy.

"You have to be fit but that's what I like about working outdoors. You get super-fit walking the hills every day."

She also enjoyed pushing others out of their comfort zones while on the hill, but the job was not just solely about guiding.

Sometimes, she would take clients - or their families - touring around the countryside. It was about getting a feeling for what they were looking for, she said.

They came from all walks of life; she recently guided a tugboat driver from Houston, and there had also been a Boeing engineer and a pecan nut farmer.

New Zealand was "on the list" - and had been for a long time - as a key destination for hunters, particularly for those that were young and fit.

Mrs Shuker was thrilled to see that more women were taking up hunting.

Guiding season was a hectic five months, during which she did not spend much time with her family.

She quipped it took her five minutes to get out the door - "a smoothie and a little bit of make-up and that's me" - to head for work.

She did laugh that she was "girly" - "I'm blinged out with my diamonds", she said, indicating her jewellery, which was in contrast to her camouflage hunting gear.

The workplace itself was a special location; Glen Dene is a 6000ha property bounded by Lake Hawea on the east and Lake Wanaka on the west, farmed by the Burdon family for three generations.

The views were spectacular and that was not something that was lost on Mrs Shuker, who said the scenery was "always awesome". 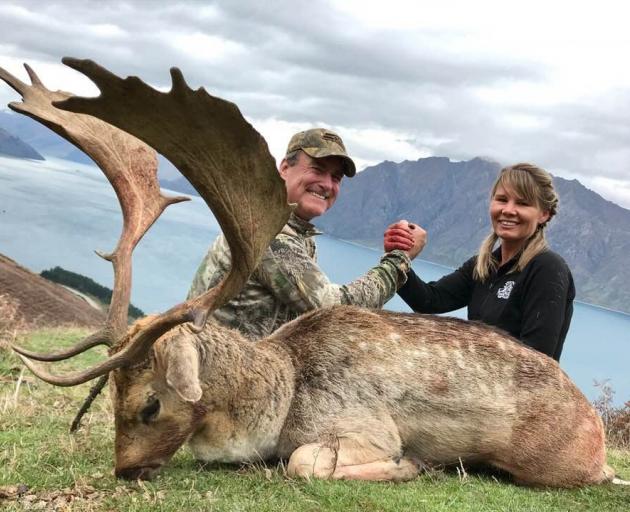 Shuker with a client and a fallow stag. Photo: Glen Dene Hunting
Hunting was something that Mrs Shuker was very matter-of-fact about; it filled the freezer with fresh, healthy meat and it also taught her sons some important life lessons.

"We live like kings so we wonder what kings actually live like, because we think we're pretty lucky. I think it's the best lifestyle."

Her children were well-known around Hawea, being spotted regularly on their bikes with their fishing rods.

They were encouraged to be outdoors, with Mrs Shuker saying she did not have the temperament to have them indoors playing with modern technology.

Hunting and fishing taught them to be resourceful and not to complain. "It makes them learn how to deal with stuff, and killing things is actually real and that's how you do get your meat," she said.

And it was also not always just about the kill. "It's just about being out there - I don't have to shoot anything, I just quite enjoy being out in the hills," she said.

She was also an advocate for using every part of the animal, right down to the bones being fed to the farm dogs.

"We use everything. It's good, that's how you want it to be. You don't want it to be wasted. It's a life giving life," she said.

Mr Burdon, who is a member of the New Zealand Game Animal Council, said the body was very keen to encourage more people to "get out there" and try recreational hunting.

The council was established in 2013 for the management of game herds (deer, tahr, chamois and pigs) throughout New Zealand.

The country had a high tahr population and there were also significant areas where there were high goat, pig and red deer numbers. There was a great permitting system through the Department of Conservation, she said.