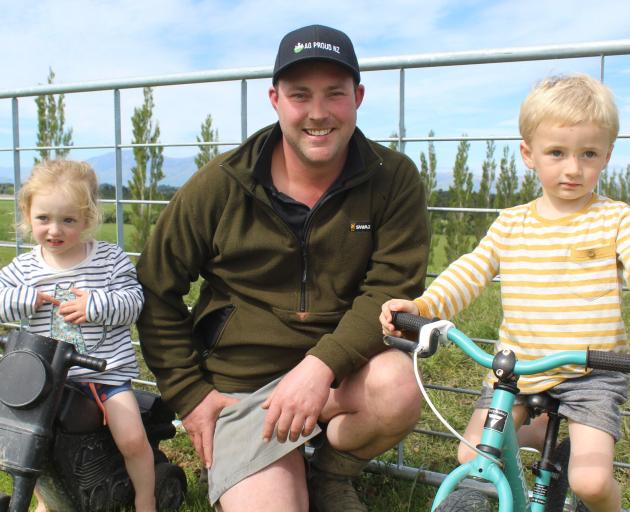 Mossburn dairy farmer and AG Proud founder Jason Checketts with his children Adelaide (2) and Liam (3). Photo: Abbey Palmer
After his first job on a dairy farm at the age of 16, Jason Checketts swore he would never milk a cow again.

Nearly two decades and a handful of primary industry jobs later, he has well and truly proved himself wrong.

Now living and working on a Mossburn dairy farm with 1000 cows and managing four to five staff, the husband and father of two has taken quite a journey to get where he is now.

Originally from Invercargill, he moved to Tussock Creek when he was about 6 and embraced the rural way of life — learning from other farm kids in the area and eventually his mother, who took on a job as a share-milker several years later.

‘‘I made a decision at an earlyish age farming was where I wanted to head.

‘‘I enjoyed animals and machinery, being outside and all the rest of it . . .It seemed like the life for me.’’

At the end of secondary school, he took on a full-time job dairy farming at a local property.

‘‘I was only like 16; you only had every second weekend off. .. I swore I’d never milk cows again after that.’’

Through mutual contacts, he was offered a job doing whatever was needed on a sheep and beef farm in Manapouri.

‘‘It was just me and a manager up there . . .It was a pretty big place and there was quite a lot happening, so I really enjoyed my time up there.’’

While learning the ropes involved ‘‘a fair bit of trial and error’’ — often on his own with very little guidance — looking back, he was grateful for getting thrown in at the deep end.

‘‘Whether it would be crutching lambs or whatever, it was sort of like, ‘righto, we’ll see you at the end of the week’.’’

About three and a-half years later, an opportunity came up to work in a similar role in Avondale.

While he was doing many the same jobs as before, it was much more machinery-based.

‘‘There was a fair bit of variation and no day was the same —which was nice coming from dairy farming, where you do the same thing every day.’’

With two farms on the property, he was offered the chance to manage one of them not long after he started.

Already knowing what was required of the labour jobs, it became about making bigger decisions, rather than ‘‘doing the donkey work’’.

At 22, once again, the drive to grow kicked in.

‘‘Farm ownership had been a goal for me from the beginning.

‘‘Not having any family backing [financially], I knew I had to do it on my own.’’

A move to a farm in Dipton, where he worked as a dairy runoff manager for a property with nearly 2000 cows, brought new challenges, including managing about 20 staff.

When the farm was sold to an overseas outlet only a year and a-half later, he was given two options — stay for six months and oversee the conversion of the run-off to a dairy shed or start milking cows again.

‘‘I was thinking, ‘right, well that sounds like a pretty s... deal.’’ However, after ‘‘a lot of umming and ahhing’’, he decided to take on a senior role at a dairy farm in Dipton with more stock and more staff than he had managed before, he said.

From there, he worked in two more managerial roles for dairy farms in Otautau and then Waimea Valley over a period of about five years, and continued to expand his skill set.

Still wanting to progress, he moved to a dairy farm in Mossburn about four seasons ago ‘‘and the rest is history’’.

Wearing ‘‘a few different hats at one time’’, his day-today routine now involved tackling a range of jobs from physical work to managing staff, as well as getting involved with the community.

One of those community roles included founding AG Proud NZ last year, a group for people who want to promote mental wellness in the agricultural sector and good farming practices and educate urban folk on the realities farmers face in the industry.

‘‘Being able to give back has been one of the biggest things for me.’’

As for what was next, equity or a 50:50 farm ownership split was the ‘‘next natural progression’’ for his career.

‘‘I’m just going to keep doing what I need to to get where I need to be.’’