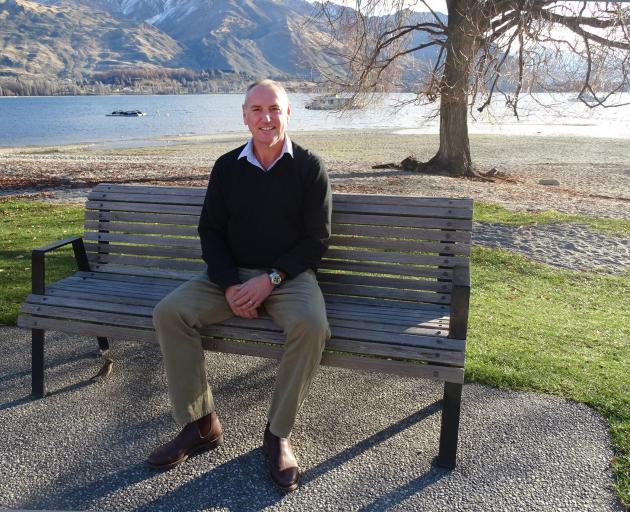 Paul Edwards, from Compass Agribusiness, works with both individual farmer clients and agricultural businesses. PHOTO: KERRIE WATERWORTH
Environmental care and protection is a topic never far from the forefront of public and media discourse.

And more often than not the farming sector finds itself in the firing line over carbon emissions and pollution.

Yet Paul Edwards believes the vast majority of farmers have always been good custodians of the land.

“They are doing their best to look after their environmental footprint on the land and to make it sustainable for future generations,” he said.

With more than 30 years involvement in the farming sector, Mr Edwards is the general manager of consultancy with Compass Agribusiness, an agribusiness advisory, agri-asset management and client partnership specialist.

He joined the Arrowtown-based Compass Agribusiness team in 2019 after nearly 32 years in the livestock business with PGG Wrightson.

The role involves him being a consultant to both individual farmer clients and agricultural businesses.

It was about looking at how those businesses are tracking, along with identifying efficiencies and exploring new systems that might be worth implementing — all with the aim of making the business more profitable and giving it the ability to reach its full potential.

“I think when you’re in a business it’s always good to have somebody from outside of your business looking into it and identifying areas where improvements can be made,” Mr Edwards said.

“A fresh set of eyes is always good. While information is a lot more readily available nowadays to what it was historically, we’ve a really good understanding of industry trends and knowledge.”

Born in Invercargill, Mr Edwards and wife Maree live at Hawea Flat, just outside of Wanaka.

Spending time on a farm on his mother’s side growing up, he was always drawn to the idea of working with animals.

“What inspired me to go towards agriculture was seeing what people can do with land and animals, the productivity that you can provide through that and as an industry along with what you can bring to New Zealand and the world from being a good custodian of the land,” he said.

Mr Edwards has certainly seen some changes through the sector in his time — he reflects on the many years of working as a livestock agent in the days before cellphone technology was ubiquitous.

“Communication was a little bit of a challenge. That was business as usual at the time. Everyone, including stock agents and farmers, would probably all be a bit cautious around cellphones and other bits and pieces, but now they've just become a critical tool of the trade.”

The entire agricultural sector has also evolved in the way livestock is traded.

“We’ve moved even further on with the way computers and the internet are now being utilised with the industry to the point there are virtual sale yards running online auctions . . .and they’re increasing in popularity all the time.”

At PGG Wrightson, Mr Edwards worked his way up to become the national dairy livestock manager.

Despite working with animals, it was the people element of the role he loved most.

“You’re meeting new people all the time, you’re meeting a lot of them within their business or their own farming environment. They’re very welcoming in bringing you in and showing you their enterprise and how that works.

“I suppose the biggest bit of enjoyment out of it was seeing farmers grow stock out to their full potential and getting productivity up to its full potential.”

Custodians of the land

Despite what much of the non-farming public may think, issues over climate change were widely recognised within the farming industry, he said.

“We are seeing more prolonged droughts and weather that is unseasonable happening at certain times of the year.

“I think farmers are preparing better for those circumstances and developing and evolving for on farm policies to be able to manage those situations when they occur.”

The Government was increasingly implementing change around environmental standards with farmers now needing to meet a number of requirements to help sustain and protect the land.

And the ones not fulfilling those requirements were being put in the spotlight, Mr Edwards said.

“In general, most farmers, even though they’re farming for today, they’re thinking about what tomorrow is going to look like.

Farming in the Covid-19 era

While agriculture has always been a huge part of New Zealand’s GDP, the arrival of Covid-19 meant the sector was going to be more vital than ever, Mr Edwards said.

“Don’t get me wrong for one minute, agriculture is still going to be dramatically changed through Covid-19. But I think because it’s a primary producer, world demand is always still going to be there for protein. We export to the world plus we also supply domestically.”

“Whilst commodity prices may move up and down the demand will still be there for our product.

“Agriculture will be viewed by more people as being a critical part of New Zealand's future.”