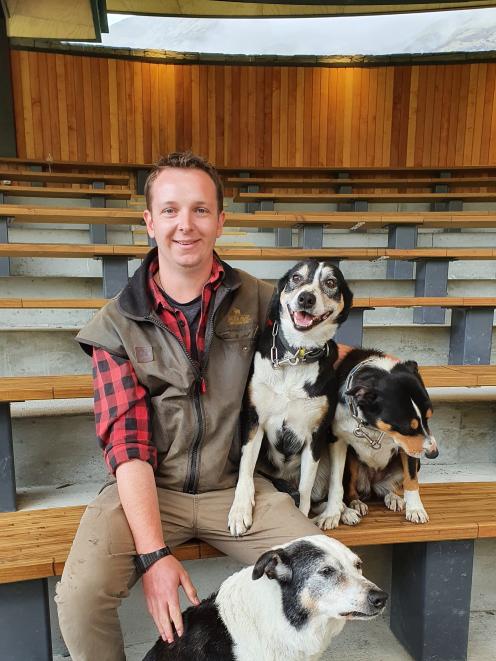 His demonstrations educate people on the rich agricultural heritage of the country and display how dogs help keep the economy moving.

Mr Hamilton got his first dog — Sprite — when he was just 12, and has worked with the short-haired English collie since then.

Sprite is no longer able to get over the fence and chase the sheep, but she still watched from the sidelines.

‘‘I went to a dog trial with her when I was 14. My family have been involved with [working dogs] for quite some time and that’s where I picked it up and learned all about it. I’ve always loved the feeling of working with dogs.’’

Since getting Sprite, Mr Hamilton has added Skye and Spree and has considered taking on another.

He said the most important trait in a pup was being ‘‘excited about chasing sheep’’.

‘‘After that it’s more down to personal preference and what sort of personality you like in a dog.’’

His own dogs all differed in traits —6-year-old Spree was very obedient, eager to please and hated to disappoint.

Skye is 9 years old and, when she wants to, can predict commands and work with sheep quite naturally, but every now and then she needs to be put on a training lead.

The trio are all bitches and that, he said, had been a bonus for him when using affection to train them instead of treats.

‘‘I always have female dogs and the affection works really well on them. I don’t know if it would work so well on a male dog, they are a little more headstrong.

‘‘It is the most common way that a working dog dies here in New Zealand —eating and then working, it twists their gut.

‘‘You don’t use treats to train them, the dogs love their work .. . chasing sheep is a treat.’’

Mr Hamilton’s dogs are all collies and he likes how good-natured they are, but there can be drawbacks compared with a huntaway.

‘‘Being eye dogs, they are not necessarily so strong on the sheep.

‘‘So if the sheep is stroppy, the dog doesn’t know quite what to do and they can end up in a bit of stare-off.’’

Those incidents are unwelcome when it comes to dog trials, he said, but the important thing is to remain patient.

‘‘Sometimes that is a whole lot easier said than done . .. but when they repeatedly do something wrong it might not be coming from disobedience but confusion.’’

When it came to sheep dog trials, Mr Hamilton urged every farmer to have a go, regardless of nerves.

‘‘Even though running dogs in front of people every day is my job, I still find it very intimidating at dog trials.’’ The dogs seemed to love it though and Mr Hamilton said it could be a great way to keep them mentally stimulated.

‘‘At a trial, you only have three or four sheep and smaller mobs of sheep are quite erratic.’’

His dogs loved the attention , the new smells and thrill of a ride on the ute, he said. Besides, ‘‘there is never a moment they don’t enjoy chasing sheep’’.