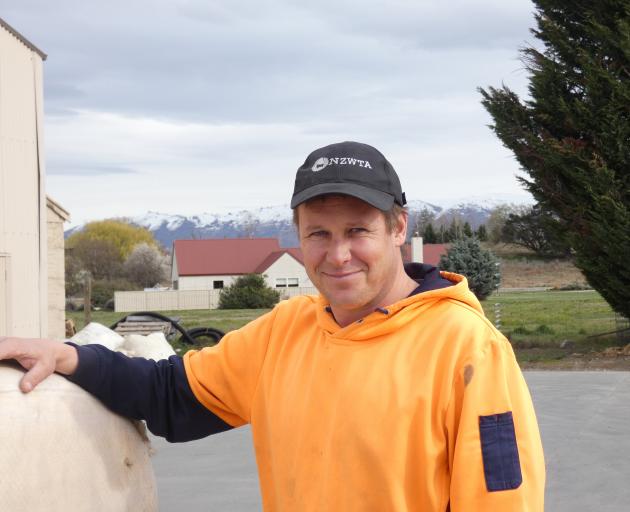 Even though the family firm has been ingrained in the rural Central Otago town for more than 60 years, it has evolved the brand to improve efficiency and maintain standards of wool exporting.

Considering the workload of the company, being on the wool ball is significant.

‘‘There’s not much of an offseason anymore.’’

Dags, cattle hides and alpaca fibre are also part of the firm’s repertoire.

The Omakau shed has capacity for 5000 bales where the shed would often be full during the busy season.

WS Hickey & Son Ltd wool handler Al Naylor shifts wool bales during a busy work day. Photo: Adam Burns
Bill ‘‘Honest’’ Hickey began the venture in 1956 and ran things out of a garage in the town as a sheepskin and dagscrushing business.

By the early 1980s, son Brent ‘‘Nearly Honest’’ Hickey had taken over the reins.

Brent’s son Hayden (38), who is now a director of the company, would help out during the school holidays.

‘‘We had a dag-crushing plant. It operated out of the shed for 30 years and we closed it down in the early ’90s,’’ Mr Hickey said.

The company had evolved from its sheepskin and dag beginnings to become a wool brokerage, charging farmers a set commission for marketing services.

‘‘We’re handling wool on behalf of farmers rather than purchasing,’’ Mr Hickey said.

The use of technology and online tools has been a key innovation in recent years for the firm.

Over the past decade, WS Hickey & Son has marketed the majority of its wool via the online platform Wool Online which had opened up the marketplace for the Omakau business.

‘‘That’s given us a big advantage of cost efficiency from an isolated place,’’ Mr Hickey said.

‘‘Compared to a Christchurch or a Dunedin, where the buyers may have been historically, it puts us on the same level as everyone else as far as ability to connect with buyers efficiently.’’ 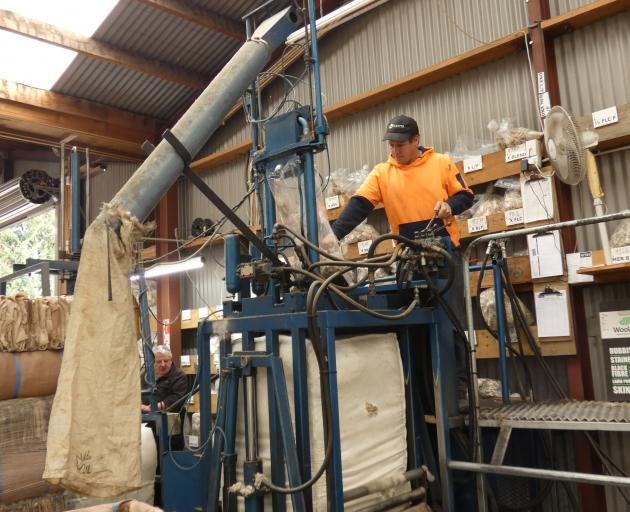 Hayden Hickey operates the core-testing machine. Photo: Adam Burns
Furthermore, the purchase of a core-testing machine from a woollen mill in South Africa during the ’90s was described as a turning point for the business as greater quantities of wool were able to be processed more quickly.

‘‘Before that you had to hand-sample it with a rod and physically push it into the bales,’’ Mr Hickey said.

Subsequently, storage within the wool shed had gradually increased to 2000sq m now.

The site added an additional binning room last year and an office was built in 2013 due to rising volumes of wool handled by the outfit, Mr Hickey said.

During quieter periods of the year, more time was spent on the road, catching up with farmers.

‘‘It’s an important part of the business . . . getting to see our clients all throughout the year at different times, not just the one time of year when they’re shearing sheep.’’

‘‘If guys are shearing their lambs we’d be seeing them [farmers] in January-February as well when we’re picking up lambswool,’’ Mr Hickey said.

‘‘We’re lucky in that respect we can have a 12-month-a-year job when it does seem seasonal.’’

The firm was not without competition as wool brokerages which distributed nationwide and boasted more resources offered stiff challenges in a competitive market.

WS Hickey & Son has five fulltime staffers alongside a further two employees during peak season from June to October each year.

As far as the development of the industry, a move to natural fibres was a recent trend which had been seen as a positive step, Mr Hickey said.

Substantial price rises in the fine-wool market had been observed over the past two years.

Mr Hickey said he hoped this was the result of a shift in consumer awareness of natural fibres.

Although the same response was yet to occur in the coarse-wool market, he hoped consumers would learn the benefits of the coarse product.

‘‘The environmental consciousness that people are getting around with now, people may pay a premium for a natural product.

Although there had been the emergence of corporate farming in the region, family ownership remained significant in wool.

Like other rural parts of the country, Central Otago’s farming was community-based where interaction with friends, family and neighbours would transcend the paddocks and wool sheds.

Farmers and residents would often find themselves on the same committees or sports teams and have children at the same schools, Mr Hickey said.

‘‘And you get that intergenerational mix.

‘‘Like myself. I lived overseas for a few years and worked in different jobs before I realised this was the place to be.’’

And as far as running a wool business goes, it may be the best place in the world to be.

‘‘We’re very lucky that the best wool in the world is grown here.

‘‘You can’t compete with the climate here.’’