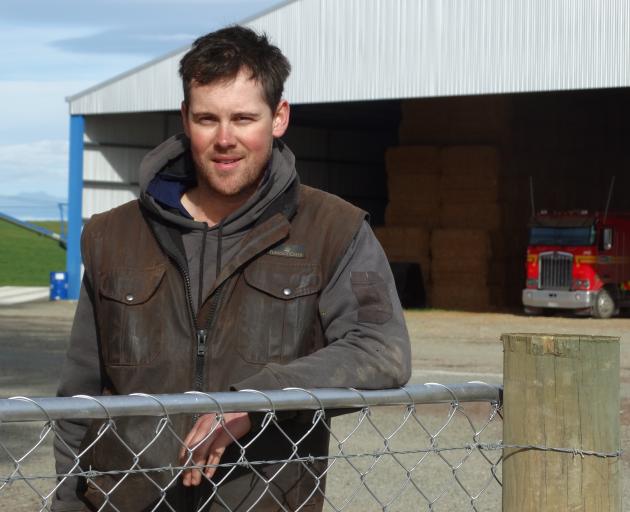 Glenavy-Waimate Young Farmers Club chairman and Multi Ag co-owner Scott Wilson says people in the farming sector should not be afraid to speak out if they are struggling. PHOTO: DANIEL BIRCHFIELD
Scott Wilson reckons the importance of getting off the farm for a few hours for a catchup with like-minded people cannot be underestimated.

The 29-year-old Glenavy-Waimate Young Farmers Club chairman, who runs contracting business Multi Ag with twin brother Craig near Waimate, has been involved in the group for about four years and chairman for about 12 months.

The focus of the group was about getting together for social activities while, at the same time, exchanging ideas about farming practices, ideas and initiatives.

Those activities included barbecues and trips to the Waitaki lakes among others.

Even a simple trip to the pub could do wonders for the stresses of farm life, which could impact on a person’s mental health, he said.

‘‘It’s a group of young people that come from different backgrounds altogether. We have monthly meetings and do fun entertainment just to get off the farm.

‘‘It’s bloody good to have a few days off the farm, or even an afternoon. It’s things like not having to cook a meal, just going to the pub and having a chat or a laugh, and talking about everyone’s week.’’

Mr Wilson believed the work Young Farmers did concerning mental health was beneficial, particularly when people had the courage to speak up about the stresses of farming, such as the weather, finances and ‘‘living up to expectations’’.

‘‘Young Farmers is leading quite well there . . . and you can go to other people in Young Farmers and talk to people about how they going and do training days. There is a lot of support there. You’ve just got to be there and have time to do it.’’

The best thing people could do was get out of the house, he said.

‘‘You can always just dwell on it and stay at home, but even just getting in a group of people who are like-minded and having a relaxing time and doing something away from the farm, and not being controlled by your cellphone or worrying about everything that’s going on . . . it’s just good to get away.’’

Mr Wilson’s foray into farming was not unexpected. He grew up on the farm he now leases from his parents in McNamaras Rd.

His parents’ siblings were all involved in farming, which meant it was pretty much a given he would follow suit.

After he left Waimate High School, he completed an engineering apprenticeship in Timaru.

After several years on the family farm, he took the plunge and moved to Western Australia in 2011.

‘‘I started off farming. I went and did the Kiwi experience — driving big tractors, headers, road trains and then sort of moved into mining.’’

After four years working the mines while based in Perth, Mr Wilson decided to return home in 2016.

He said addiction and mental health issues were an issue in the mining sector in some areas, a life he wanted no part of.

‘‘I’ve seen the lot. They did do a lot of mental health workshops, but you see a lot of things that normal people wouldn’t see. put it that way.’’

When he returned to Waimate he got more involved in the family farm and took up the lease at the 170ha property in April.

Together with brother Craig he runs Multi Ag, an agricultural contracting business.

Craig handles the agricultural spraying side, and Scott the rest.

That included conventional, round and square wraps (baleage), silage, straw, supplements and supplying feed for the dairy industry.

While most of their work was limited to the South Canterbury region, its straw, ryegrass and barley could be found from Southland to North Canterbury.

Business had started to pick up again after the winter lull, when Mr Wilson focused on lamb trading.

He said the market was strong this year, which meant he was likely to do the same in 2020.

His father still ran ‘‘a few sheep’’ on a 10ha block on the property, which he helped out with when he could.

He was also on the lookout for a full-time staff member, the number of which at present was zero.

However, Mr Wilson was content with his workload and looked forward to the summer ahead.