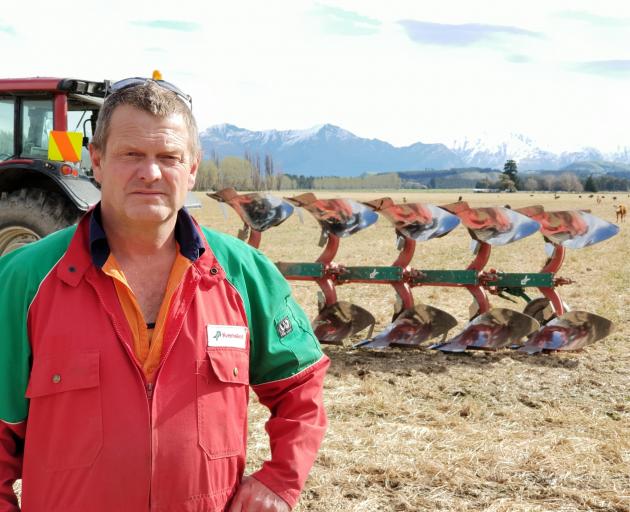 Technology has advanced farming practices beyond belief in recent years, but some, like Lake Hawea contractor John Osborne, prefer it the old-fashioned way.

A ploughing enthusiast, he has been saddened by the disappearance of the plough in an era he described as ‘‘everything needing to be done at speed and done now’’.

Growing up on a South Otago farm, Mr Osborne learned how to plough at a young age and has been an enthusiast ever since.

A career in farm management beckoned upon leaving school, before he relocated with his family to Lake Hawea nine years ago and started up an agricultural spraying business.

By being in that line of work, Mr Osborne has seen the rapid decline in the use of the plough and blamed technology and the impatience of farmers for its demise.

‘‘When I was brought up we ploughed and the ground got fallowed and it sat for the winter. It fallowed in the frost and just naturally weathered down. But nowadays, farmers are trying to get as much as they can out of the ground so they don’t plough and fallow and leave ground sitting vacant and empty any more. They like to go from one crop to the next crop to the next crop.

‘‘That’s why there’s a lot of chemical application now because everything’s done at speed. When we used to plough we’d bury the weeds and they’d die and we hardly ever sprayed. Now we spray it off, it’s surface worked and within a matter of days crops are back in again. The rotation is a lot quicker.

‘‘That’s why I think ploughing has fallen out of favour because it’s like everything in this world now, everything has to be done at speed. We’re not satisfied unless we’re moving flat out and getting things done.’’

Unfortunately, the future of the plough did not look bright due to the advanced technology of tractors fitted with GPS mapping and near-automatic spraying and seeding systems, he said.

‘‘I think there’s so much other technology now I think the days of the plough are numbered. I don’t think you’ll see a huge turn back to the plough at all.’’

But ploughing never strays too far from his mind.

From 1998 to 2011 Mr Osborne ploughed competitively and competed in nine national finals, from Auckland to Invercargill.

‘‘People don’t think of ploughing as a sport, but it actually is. It’s a good sport but it’s a different sport.

‘‘It’s quite commonly referred to by wives and family as watching paint dry but I think it’s a spectator sport if you appreciate what we’re trying to achieve with it.’’

He was keen to get back into the sport but the number of ploughmen had dwindled.

‘‘When I started there was probably double the ploughmen in Otago-Southland as what there is now.

‘‘The young ones aren’t coming through and it’s quietly slipping away, which is a shame.’’

However, that has not stopped Mr Osborne from having a vision of hosting the World Ploughing Championships in 2028.

He recently held a small event at land near Johns Creek to test its suitability for ploughing and quickly concluded it was some of the best in the country.

Now he is planning to prepare a bid to host the world championships.

While expensive to host, he believed it would have a ‘‘huge’’ benefit to the district and attract at least 1000 people.

‘‘We could certainly host a world match here, there’s no doubt about that. We’re fortunate because the biggest issue of running something of that calibre is to get the lands to run it on but we’ve already got that.

‘‘We’d like to think we’ve got the ground to have it and the quality of soil to have it.’’

The bid would be submitted next year and if successful, planning would begin almost immediately.