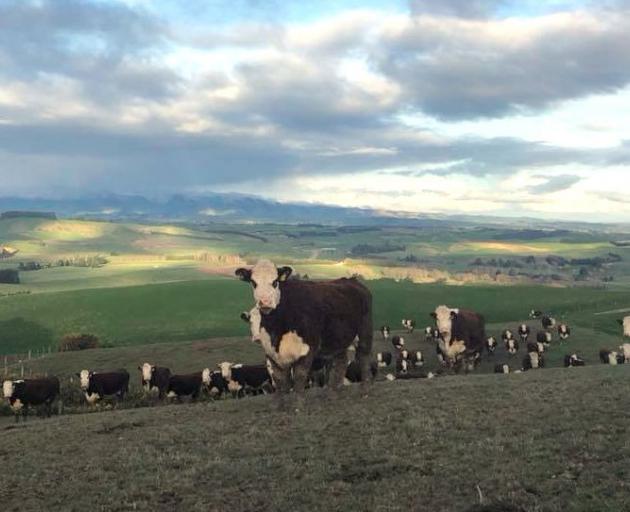 Back in 1953, Matthew Kirkpatrick founded the Hereford stud that is now Waikaka Herefords.

One of Laurie Paterson’s earliest recollections of his grandfather was him driving an old, white, badly-dented Dodge car ‘‘rather like a tank’’.

‘‘So much so that one of the contractors always parked his car on top of the loading bank as he reckoned it was the only place safe from the boss.’’

Mr Kirkpatrick’s wartime experiences resulted in him being mentioned in dispatches for his work in the Imperial Camel Corps.

Behind the door, in the corner of grandfather’s office, Mr Paterson remembered a cavalry sword. Two large shell cases sat in another corner and on the bookcase was a bayonet and a Colt .45 automatic army pistol in its leather holster.

There were numerous rifles and shotguns while in an old ammunition box were two hand grenades, a wooden nose peg for a camel, enough .45 and .38 ammunition ‘‘to quell a medium-sized uprising’’ and a small 45deg mirror that strapped to the forsight of a rifle, allowing the shooter to see 90deg around buildings for street fighting.

‘‘These things were not there as a show of bravado, they were just part of his life,’’ Mr Paterson said.

Matthew Kirkpatrick was born in Lawrence in 1886 and the family lived at Blue Spur, a gold mining settlement nearby on the way to their gold sluice on the Clutha River at Horseshoe Bend.

The sluicing operation was productive and Mr Kirkpatrick attended high school in Lawrence, relatively uncommon for miners and farmers at that time.

One of his jobs was to bring in the gold from the mine and take it to the gold office in Lawrence on his way to school.

‘‘For this purpose, he carried a .38 British Bulldog revolver which most likely went to school with him.’’

In 1907, his father sold his mining interest and invested in land, buying a block at Greenvale on the break-up of Waikaka Station. Matthew became a farmer.

Following the outbreak of World War 1, he enlisted.

He was shipped to Egypt and, as he was very good with horses, helped identify and fix their ailments, like an unofficial vet.

It might well have saved his life, his grandson said, as he was not sent to the carnage of the Western Front or Gallipoli but was attached to General Allenby’s Army to be part of the last great cavalry campaign in history up through what is now Israel, Jordan and Syria.

On the way home, writing in the ship’s newspaper on the vessel Kaikoura, he said ‘‘War is hell and looks well only in a picture show’’.