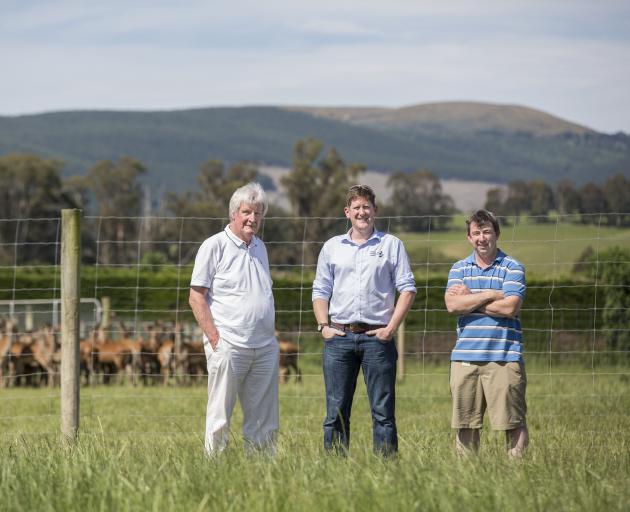 Harry might have met Sally but when Rory met Frank, it was to lead to a move to the other side of the world.

Originally known as Deer Research Laboratory, it was established by Prof Frank Griffin in 1985 within the Department of Microbiology and Immunology at the University of Otago.

It has worked closely with veterinarians and farmers for more than 30 years to develop and make available custom-diagnostic services.

Latterly, it moved from a university-administered laboratory service into an independent commercial entity under the management of Otago Innovation Ltd.
In recent times, DRL’s stock in trade had been a test tailored for the diagnosis of Johne’s disease in farmed deer.

Before that, it was heavily invested in the development and application of a custom Tb diagnostic test for the deer industry.

As a consequence, the incidence of Tb in New Zealand deer herds was reduced hugely.

When Prof Griffin was awarded the Pickering Medal by the Royal Society of New Zealand in 2010 in recognition of excellence and innovation in the practical application of technology, DRL’s efforts were credited with having saved the deer industry $90 million of production that would otherwise have been lost to Tb, yersiniosis and Johne’s disease.

He started work at Ireland’s Department of Agriculture which funded his PhD studies at the National Agricultural and Veterinary Biotechnology.

He was looking at novel strain-typing methodologies to type Mycobacterium bovis, which caused bovine Tb, an ongoing problem in Ireland.

Coming to New Zealand for a holiday was already on the radar for him and his partner when he met the renowned Prof Griffin at a conference at Cambridge.

But it morphed into a post-doctoral position in Prof Griffin’s laboratory. Joining Prof Griffin was ‘‘a bit of a no-brainer’’ at that point but the intention was never to stay.

Fast forward to 2018 and the couple are still here, having quickly fallen in love with the region.

On reflection, Dr O’Brien wondered whether he would do it again. It might have been the naivety of youth, but it was absolutely the right thing to do, he said.

As it happened, the couple ‘‘hit the bullseye straight away’’ both finding work.

Unlike Dr O’Brien, who joked that he did not ‘‘speak farmer’’ — ‘‘I’m a lab rat’’ — laboratory manager Simon Liggett did come from a farming background.

He was raised on a sheep, beef and deer farm at Black Rock, near Lee Stream, where his parents got a ballot farm in 1975.

After boarding at Otago Boys’ High School, Mr Liggett headed to Massey University where he did first-year veterinary science.

He worked in the lab for Ambreed in Christchurch processing semen until it shut down its South Island facility and he was made redundant.

He worked on the farm for a few months and then got a job at CRT (now Farmlands) in the shop, before getting a job at the laboratory, whetted by his interest in deer.

DRL’s ‘‘bread and butter’’ had been Johne’s disease, testing primarily in the deer industry. It reached a peak in the mid-2000s — ‘‘by all accounts an epidemic’’ — and has decreased.

DRL has worked hard to grow its presence in the dairy sector, where there was much denial about Johne’s and the size of the problem was only starting to be realised, Dr O’Brien said.

How to ‘‘get into the heads’’ of dairy veterinarians and dairy farmers occupied a reasonable amount of time.

Last year, DRL became the preferred service provider for CRV Ambreed for its herd testing. When CRV Ambreed asked if the team could do BVD as well, they said they could —and figured it out.

Most recently, DRL had been making approaches to the dairy goat industry, wanting to be its ‘‘go-to-lab’’ for diagnostics.

It was a growing industry — with the likes of the Dairy Goat Co-op — and one Dr O’Brien believed was ‘‘on the cusp’’ from going from a boutique industry to a legitimate entity.

Being based at Invermay — where there were increasing numbers of commercial tenants — had been a great move.

They were also surrounded by agricultural scientists, which was useful. They were doing some collaborative work with the genome team with BVD.

That would be a lot more difficult if they were not based on the same campus, with a ‘‘40-second’’ walk over to their headquarters, Mr Liggett said.

DRL had always had a close relationship with AgResearch and that was just carrying on. It was really just an extension of Prof Griffin and veterinary scientist Colin Mackintosh’s collaborations over the years.

Things were constantly changing and DRL needed to continue to grow. Prof O’Brien expected the growth was probably going to come from the dairy industry; there was not too much room for manoeuvre in deer and the dairy goat industry was quite unknown.