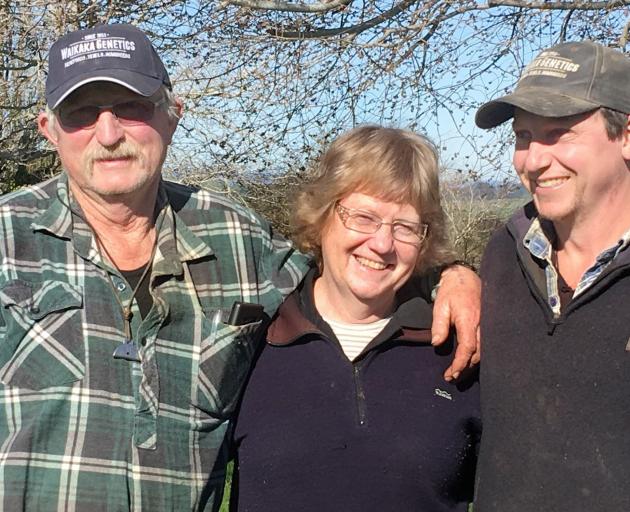 Stud breeding is in the Paterson family’s blood.

Waikaka Station is home to the fourth and fifth generations to farm the Greenvale property — Laurie and Sharon Paterson and son and daughter-in-law Ross and Steph — while a sixth generation is looking promising.

Young Ollie (8) cannot wait to get on his motorbike while Emmie (6) is aiming to ride around the stock with her grandmother on horseback this summer.

Leo, the toddler of the family, has his boots on in the morning before his father, Ross quipped.

And then there is Brian — possibly one of the few sheep dogs in New Zealand to have his own Facebook page, documenting his exploits.

With a strong industry and community involvement — plus running a large business — and with more enterprises planned, it is a busy lifestyle.

But, as the indefatigable Sharon — mistress of Brian and secretary-event manager for the Southern Field Days — says: ‘‘We just roll with it’’.

The hard-working and down-to-earth family has been on the property since 1907, which has more than doubled in size.

It was the Hereford breed that brought Laurie and Sharon together at a Hereford dinner. Sharon (nee King) came from a stud Hereford breeding background and her family continues to run Waiau Herefords at Tuatapere.

Laurie Paterson flew helicopters before returning to the farm while the couple’s younger son, Bill, now flies helicopters in the tourism industry on the West Coast. He and wife Becs have a 4-year-old son Jimmy.

Ross Paterson always thought he was going to be a farmer — he just was not sure how it was going to work out.

He spent a few years building in Dunedin — and planned to see ‘‘a bit more of the world than just Dunedin but didn’t really go much further’’ — before returning to the farm at the end of 2009.

Laurie Paterson has been a tireless stalwart of the Hereford breed and involved with industry matters over a long period. 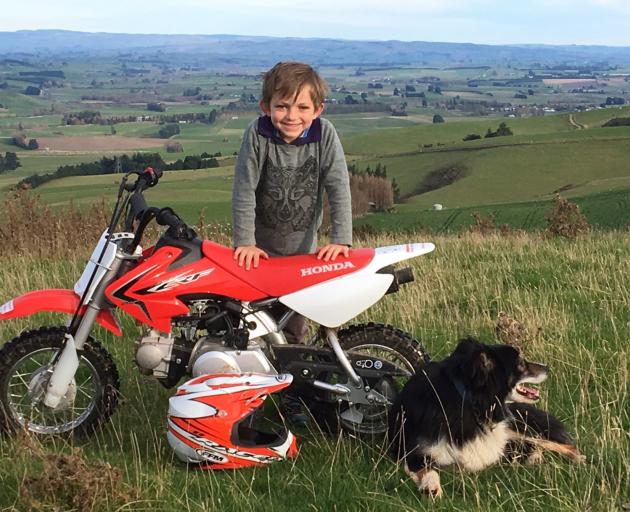 Ollie Paterson (8) with his motorbike. Photo: Paterson family
His contribution to the beef industry was recognised when he was made an Officer of the New Zealand Order of Merit.

He is a past-president of the New Zealand Hereford Association and is one of only a small group of breeders to have been awarded Fellowship of the Hereford Breed.

In the 1980s, he recognised the value of the BREEDPLAN genetic evaluation software, which calculated estimated breeding values, and was involved in introducing it to Hereford breeders.

That eventually led to its use for other breeds and the combining of New Zealand data with Australian for transtasman genetic evaluations.

He was one of the instigators of Hereford Prime; he has been a director since its inception in 1992 and chairman since 2000.

Hereford Prime was the first quality beef breed programme launched in New Zealand in 1992. It was born out of frustrating dining experiences by beef enthusiasts who were searching for a consistent and quality eating experience.

Don Goodall, a friend of Mr Paterson’s, did a fair bit of travelling and was horrified with the overall standard of steak. ‘‘He said, ‘we’ve got to do better than this’.’’

Jimmy Paterson (4) also checks out some sheep. Photo: Paterson family
The initiative ‘‘took off with a hiss and a roar’’ and Hereford Prime now has four processor partners — Bowmont Wholesale Meats in Invercargill, which had been involved from the inception, ANZCO Foods in Canterbury and Cabernet Foods and Magills Butchery in the North Island.

More than two decades later and Hereford Prime was going very well, with a lot of positive feedback about the quality of the product.

Getting it off the ground involved a lot of hard work. Those instigating it spent a day a week in the chiller for a year ‘‘just trying to work things out’’, Mr Paterson said.

In the last couple of years, there had been some very good Hereford sales which was a reflection of the beef industry and also the sheep industry, as farmers had more money to spend.

It also showed the quality of Hereford cattle available and some of that was because it had never been a single-trait selection breed.

The bull was sired by Monymusk Eiffel Tower, whom the Patersons bought at the national sale in 2011 for $12,000.

Emmie Paterson (6) inspects some sheep with Brian the dog. Photo: Paterson family
Another son, Waikaka Skytower 1210, won supreme champion Hereford, along with the Junior Meat and Wool Cup, at the Canterbury A & P Show in 2013, shown by Becs Paterson.

One of their stand-out bulls was Hikatu Lightning who was bought from the North Island for $33,000 some years ago.

Their most recent purchase was from Matariki Herefords in the Clarence Valley, near Kaikoura, this year, for $27,000.

Laurie was excited about Matariki Jetson — ‘‘as excited as I get’’ he said in his own laconic way.

The bull had all the physical attributes — including a very good carcass and ‘‘exceptional’’ feet — coupled with exceptional indexes.

In 2020, Queenstown will host the World Hereford Conference — the last time it was held in New Zealand was 1984 — and a special Hereford show will be held at Wanaka Show.

The Patersons have a Texel sheep stud, which is Sharon’s particular interest. She previously had a flock of black and coloured sheep and did felting, receiving a highly commended award in the Hokonui Fashion Awards.

She then changed from black and coloured to the Texels, buying six in-lamb ewes from Peter Black.

They needed a meat breed and Laurie said the Texels had a different carcass to get better yield and he also had ‘‘incredible faith in wool’’, he said dryly.

Earlier this year, they sold the two top-priced Texel rams at the South Island ram fair in Gore, while they had previously sold a ram for $12,000.

Sharon was involved in banking when she met her future husband. After the two boys left school, she spent six and a-half years working in insurance for FMG.

In August 2013, she joined the Southern Field Days team and she intended doing one more field days before retiring from that position.

It would mean more time on her horse with her granddaughter ‘‘trundling behind’’.

And she had another project — she intended opening Paterson Park and Gardens, developed by her mother-in-law Lorraine Paterson, on the property for garden tours.

Ross and Steph were also preparing to shift a hut on to a hill site on the property on a native bush block to hire out.

The aim was to plant more trees and regenerate the bush. Young Ollie had been busy potting native seedlings and selling them to his father — for a profit — to be planted there.

Steph Paterson, who came from an organic kiwifruit orchard, studied fashion in Dunedin and owned a fashion store in George St before shifting south.

She acquired an old caravan and refitted it to serve drinks at weddings and now also hired out vintage ‘‘stuff’’ — as Ross put it — for styling weddings.

She was also involved with the Southern Wedding Collective, bringing together those involved in the wedding industry in the South.

Laurie believed it was important to have interests outside of the farm. Being involved with the Hereford council meant he had met people throughout the country ‘‘doing the same thing’’ and also a diverse mix.

In recent years, thanks to the use of social media, they had also had international visitors to their farm to work and they had all been ‘‘bloody good people’’.

Farmers were doing a lot in the environmental space, as they were, and looking at water quality.

One thing Sharon was keen to do was an environmental plan and look into understanding carbon credits.

‘‘We’re doing all we can to prove we are sustainable and we’re looking after the water.’’

Laurie said what was disappointing was that farming ‘‘seemed to be the problem with everything’’ at the moment.

‘‘It’s obviously not, if you stand back and look at it. It’s providing wealth of the country,’’ he said.

When it came to their future plans, it was about a sustainable and profitable future, and to keep Waikaka Station available for the family where possible.

As far as working together, Sharon said ‘‘we’re all pretty open — it just sort of happens’’. When they did the likes of baleage, everyone partook in it and, when Ross and Steph headed overseas, then Bill and Becs came to stay and help — ‘‘they just fit in’’.

Planners on their phones meant that everyone knew what they were doing. A far cry from the days of Laurie’s grandfather. ‘‘Sometimes I think even about my father. What would he think?’’