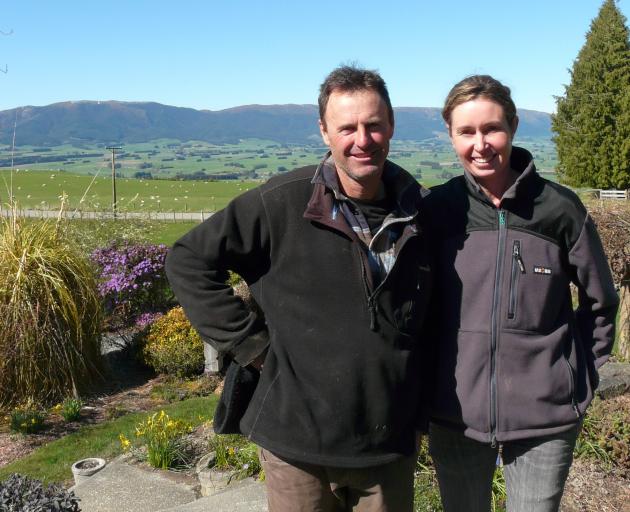 Heriot far­mers Clark Scott and Judy Miller want the Pathway for the Poma­haka water care scheme to inspire other rural catchments around the country. Photos: Richard Davison
Water quality in New Zealand’s creeks and rivers has become a hot-button issue during recent years, and much has been made of the failure to live up to the nation’s "100% Pure" branding.

Given recent headlines declaring Otago’s waterways to be "horrific", and with only 60% considered better than "fair" over the course of a 10-year analysis, it would be easy to believe the message has not been getting through to where — and to whom — it matters.

Those often bearing the brunt of blame for deteriorating water quality have been farmers, but their characterisation as wilfully ignorant, environment-wrecking profiteers could not be further from the truth, according to Landcare Research environmental scientist Craig Simpson.

Mr Simpson was project coordinator for the award-winning Pathway for the Pomahaka water care scheme in West Otago during its first three-year phase that ended this June.

Since he was retained by its 160 farmer-stakeholders as an overseer for its second, farmer-led phase — under a new, "Pomahaka Catchment Project" banner — Mr Simpson said the scheme bore testament to the collective conscience of the agricultural community.

"Over the past three years we’ve seen huge improvements in E. coli and nitrogen reduction throughout the catchment, and started to takesteps to mitigate sediment and phosphorus, although there’s significant work still to be done in those areas.

"The reason the scheme’s been able to make the strides it has is the level of buy-in from the farming community, with about 50% of eligible stakeholders taking an active part. Farmers care about their local waterways, and want to do something practical to help improve them."

Among those leading the charge for the Pomahaka are Heriot couple Judy Miller and Clark Scott, who run a 247ha sheep and beef farm of about 3000 stock units, on typically steep, rolling West Otago terrain.

The farm sits on a square-shaped block, bordered at its low-lying northern end by the winding Spylaw Burn.

"What starts up, must come down," summarised the environmental challenges facing the farm, Ms Miller said.

"As you can see, the farm starts up here on the ridge, and descends to the flat, with several small creeks and drains feeding into the Spylaw at thebottom end. Most of our initial challenges have centred on keeping sediment and water contaminants up in the paddocks, where they’re doing what they should, and away from the waterways, where they’re not."

Clark Scott inspects a riparian planting area on a Spylaw Burn feeder creek, which has helped reduce the creek’s E. coli and turbidity levels by more than 90% in three years.
In common with the majority of the catchment’s farmers, that had entailed a gradual change to best practice in areas such as pasture, fertiliser and grazing management, yielding positive knock-ons in efficiency and productivity.

"It’s just simple things like grazing from the top down, so you leave a buffer for contaminants, and managing critical source areas within your paddocks where run-off converges. The most effective cure is prevention."

Fencing of waterways was also critical, but need not be the burden some farmers perceived it as, she said.

"It’s down to the farm whether they decide to fence permanently, or with temporary fencing at certain times of year and according to use. Several of our creeks already have fencing down one side as they’re natural boundaries between paddocks, but now we’re also planning, on the other side, to fence off the bottom ends where they feed into the Spylaw. That amounts to about a kilometre of additional fencing which, with the other mitigation measures we’re working on, should prove very effective." 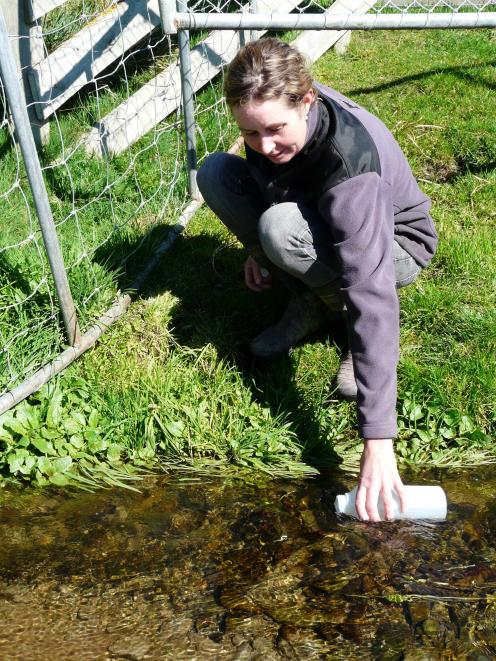 Judy Miller takes a regular monthly control water sample in one of the farm’s feeder creeks, to assess the effective­ness of water care measures.
Additional measures included riparian planting, and the recent introduction of sediment traps — the latter still something of a work in progress, Mr Scott said.
"The principle behind them is pretty simple, essentially slowing the water flow by creating a pool in-stream, which then allows sediment to settle. In practice they almost work too well and become filled with sediment quite quickly.

"The two we’ve got working here are a bit of an experiment, so we’re looking at refining the design as we roll them out to other drains, to make them easier to clean out."

The traps were intended for use in parallel with the natural filtration provided by phased riparian planting of native wetland species, including the commonly found sedge Carex secta, and Austroderia spp. — better known as toitoi, or toetoe.

Here, also, the advantages to the farm were not limited to matters environmental, Ms Miller said.

She highlighted a well-established 60m stretch of sedge and toitoi, planted only three years ago.

"This was just a drain initially, and we were continually having to rescue stock, and keep it clear with a digger.

"So from a stock management perspective it’s made sense to fence it off; then, eventually, successive plantings will provide stock shelter and reduce swampiness and weed growth, improving the paddock from both farming and water quality perspectives."

Further tributaries were earmarked for similar treatment during the next three years.

"What’s been most noticeable is the effect the plantings and traps have had on water quality, versus a nearby control creek.

On average we’ve seen a 90% reduction in E. coli, and 94% reduction in turbidity [sediment] since the outset. Not only does it look nice, it has a practical farming purpose, brings us towards compliance, and allows you to feel good about your environmental contribution to the bigger whole."

That "bigger whole" was key to engaging and motivating the project’s stakeholder-farmers, Landcare’s Craig Simpson said.

"The biggest change we’ve seen is in the adoption of best practice farm management techniques. On top of that, our members have taken 340 annual water samples to give us a cross-catchment picture of the improvements made and areas to be addressed. Then we’ve got a small but dedicated nucleus of members like Judy and Clark, assessing projects like experimental wetlands and sediment traps.

"It’s all about a farmer-led approach, working with other farmers to tackle a large and complex problem in manageable, simple, effective and affordable ways. What one of us learns, we share; and through those small steps, we can make a big collective difference."

The scheme’s literature offers up a goal of delivering "the absolute highest water quality so future generations can enjoy the river as we have. A pristine environment to swim, play and fish in".

With $1 million earmarked to fund the project for the next three years from Government and other sources, that was not just a pipe dream, Ms Miller believed.
"It’s not always been easy, but you have to start somewhere. There are sensible, commercial drivers for putting some of these measures in place, and now we’re seeing the clear environmental benefits too.

"Of course you want a cleaner environment for your children to grow up in but, in some ways, it’s not just about that. It’s about leaving this place better off for whoever’s here next."