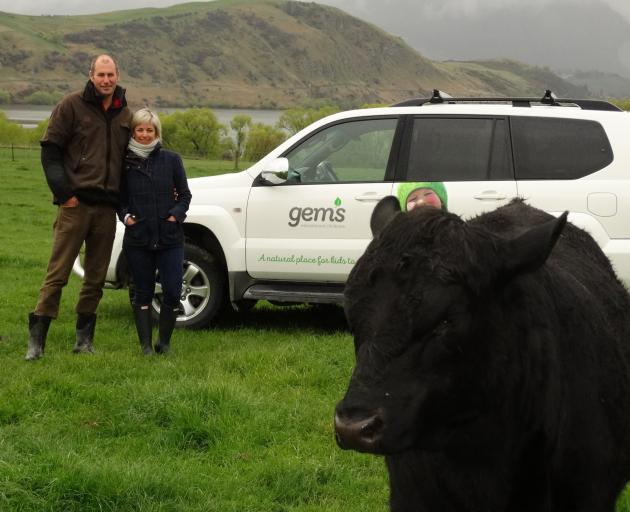 Gemma and Mike Smith and one of their Angus stud bulls on their farm overlooking Lake Hayes. Photo: Guy Williams

As Queenstown farmers Mike and Gemma Smith have expanded their business interests into the town, they have brought dozens of the town’s children a taste of the country.

As well as running an Angus stud farm on their Lake Hayes property, they own two childcare centres.

Gems Lake Hayes Estate and Gems Shotover Country are only a few minutes’ drive away in two of Queenstown’s newer, family-friendly suburbs.

What sets these centres apart, possibly from any other in New Zealand, is the ‘‘farm school’’ each 4-year-old child gets to go to once a fortnight, all year round.

Two days a week, a dozen children accompanied by two teachers and a parent volunteer arrive at the 65ha farm.

They children spend four or five hours in unstructured play while experiencing life on a working farm.

Depending on what is happening that day, they might see lambing, tailing or weaning. Or watching honey being extracted from beehives, seeing a farrier at work or learning about trapping predators. 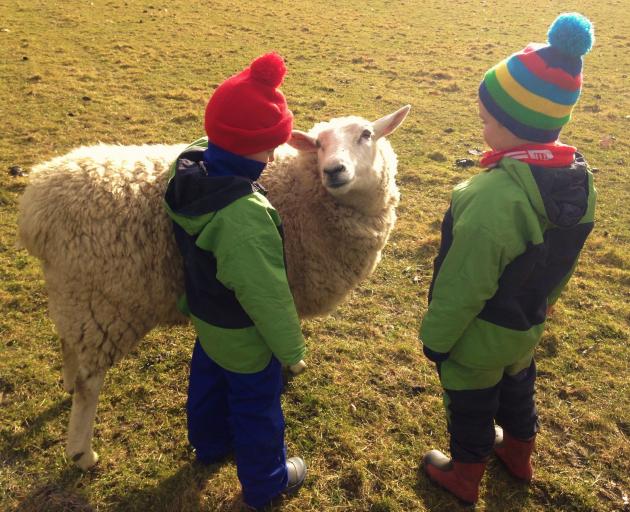 The property has a rope swing, a creek, a pony, a mud slide and a tree hut.

Annual events are organised such as the ‘‘mega’’ waterslide in summer and a Matariki-themed ‘‘night farm school’’ on the shortest day of the year.

Mrs Smith said the farm school was designed to give the children an opportunity to learn practical skills in the outdoors.

‘‘It builds up resilience and a bit of grit before they start school.’’

It is inspired by the ‘‘forest school’’ concept, developed in Scandinavia, of hands-on learning in the natural environment.

Awareness of the concept is growing in New Zealand, with a handful of childcare centres and kindergartens running their own versions, usually in public reserves.

But, as far as the Smiths are aware, their farm school is the only one of its kind in the country.

They are in the ‘‘pretty unique position’’ of having a farm close enough to their childcare centres to make it feasible, Mr Smith says.

Staff member Mark White has been the driving force behind getting it up and running, and is heavily involved in lobbying the Government to create a new category of childcare centres based on forest school principles.

Mrs Smith said the ‘‘risks and hazards’’ inherent on the farm had been carefully assessed, and were mitigated by health and safety plans and their specially trained teachers.

Thinking about those risks was part of the children’s experience.

‘‘It’s collaborative, it’s teamwork, they have to understand safety and be mature enough to listen.’’

Most parents came along as volunteer helpers at least once during the year their 4-year-old was eligible to go. ‘‘The parents are critical to the running of it — it wouldn’t be viable without them,’’ Mr Smith said.

The couple, who met in the resort in 2004, both come from farming families — Mr Smith from the Methven area and Mrs Smith from near Geraldine.

She was co-owner of a planning consultancy in the resort, while Mike was managing Remarkable Park farm’s deer stud.

About a decade ago, they began thinking about a change in direction.

As well as wanting to start a family, they could see unfulfilled demand for childcare facilities in the area.

Mrs Smith said one of the biggest challenges in her planning business was getting female staff to return to work after having children.

They wanted to come back, but were having to wait up to three years to get their children into childcare.

Around this time, the GFC was putting the squeeze on the planning industry, so she decided to focus on new opportunities.

Mr Smith said they decided to ‘‘pour our energies into our own businesses’’.

Besides the lease on their Lake Hayes farm, they were running a commercial herd on a Cone Peak Station lease and sharefarming near Kingston.

In 2010, Mr Smith began bringing key breeding stock down from the Kincardine Angus stud started by his parents in Mid Canterbury 50 years ago, and began rebuilding it.

They later sold part of the breeding herd to finance their move into the childcare sector, opening their first Gems in Lake Hayes Estate in 2012.

Their daughters Libby (8) and Briar (6) both attended the centre.

Gems Shotover Country opened last year, and in a year’s time they will open a third, Gems Blackbird Hill, as part of the Queenstown Country Club retirement village.

A fourth centre, in a location yet to be confirmed, is also in the works.

They are also planning to expand their farming interests, with a goal of buying a farm in the next three to five years to continue growing their herd. The focus of the Angus stud is an artificial insemination programme to introduce new genetics to the closed herd.

Did I read that correctly, they're opening a child care business in a retirement village?