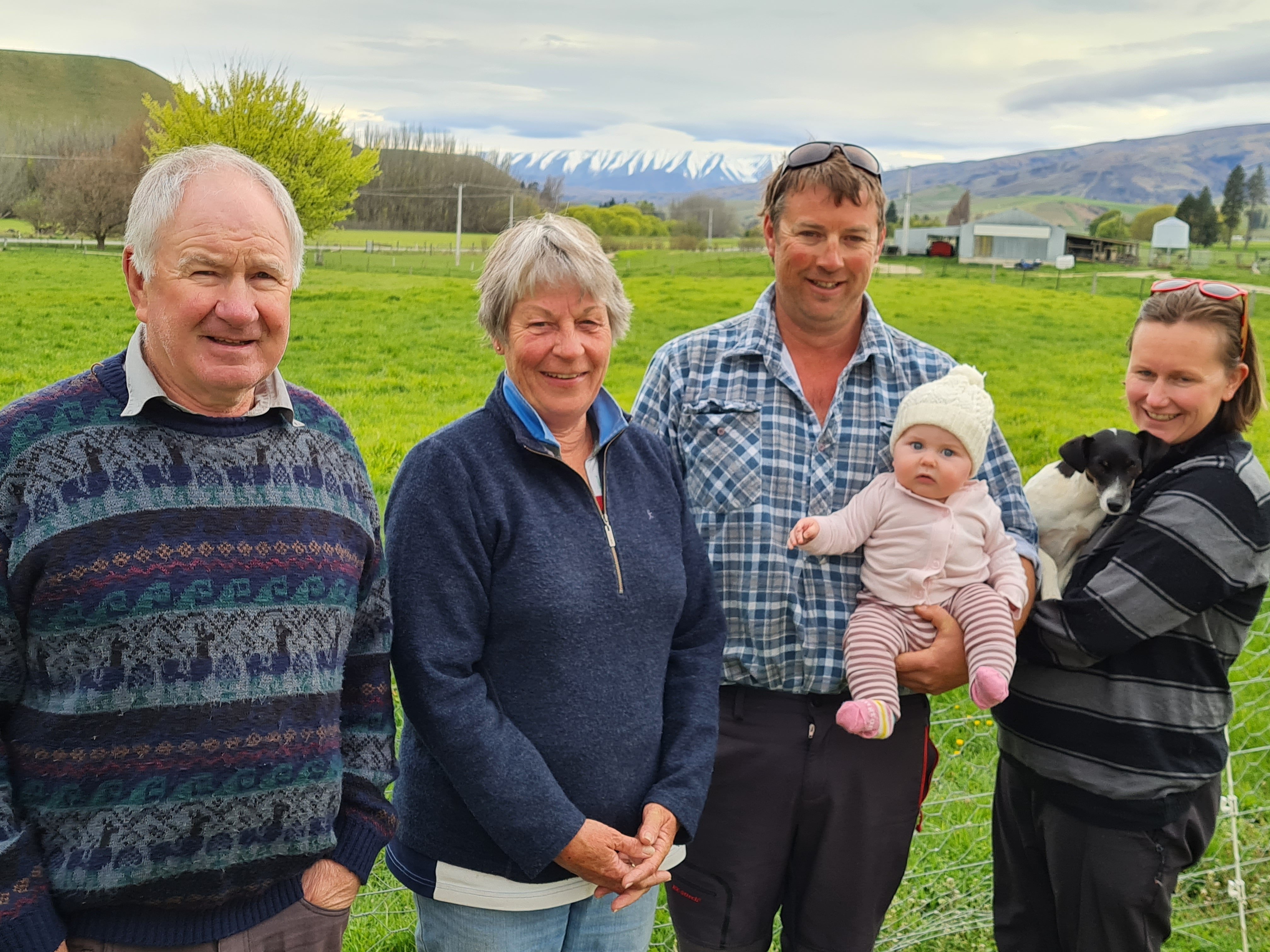 Eight years after Jonny Trevathan was sent home from a Masterchef competition for burning a pork chop, the irrepressible Tarras farmer is still confidently farming and cooking for his family.

He was relieved to quit Auckland and return to life on Lindisvale farm in the Ardgour Valley.

His partner Paula Macfie, and mother of 6-month-old Maggie Trevathan — who represents the fifth Trevathan generation — attests her man is ‘‘actually really good at cooking meat. He’s a way better cook than me’’.

Jonny’s laconic humour and big beard won him media attention in 2013 and ensured he achieved his aim of representing Tarras on the national stage.

But apart from the occasional barbecue appearance, he has kept out of the limelight and is now unrecognisable.

When the ODT arrived at Lindisvale he was shaving in the garden — ‘‘Just doing some housework,’’ he called. ‘‘Go on in.’’

Inside, Beau and Ann Trevathan were ready at the table with cups of tea.

Third generation farmer Beau Trevathan is a former Cromwell Community Board member and an staunch advocate for Tarras School and community growth.
There have been Trevathans farming at Tarras since 1914, when George and Eva Trevathan, Beau’s grandparents, won land in a ballot.

An Ardgour Valley block of about 300ha had been carved off from the 162,000ha Morven Hills Station in 1910 and then split into many smaller holdings of between about 16ha and 36ha in 1914. 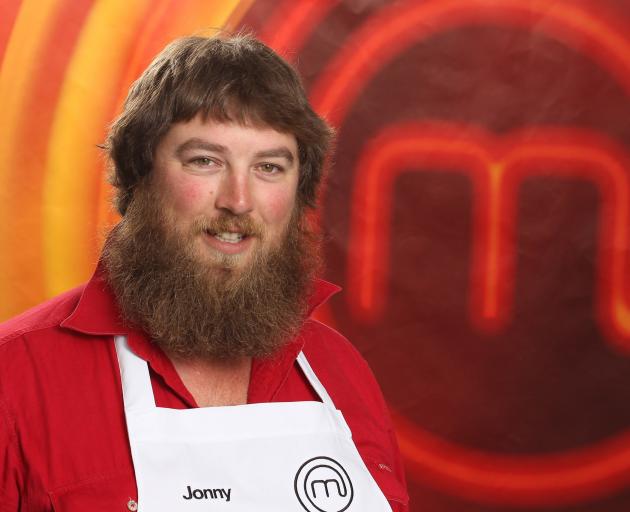 Jonny Trevathan during his MasterChef experience in 2013. PHOTO: TVNZ
These were balloted under a government land settlement policy and George and Eva won a 36ha plot of bare land with a water race easement from the Lindis River. At first, George and Eva lived in a one-room concrete hut with a canvas lean-to. In the 1920s, they built a three-bedroom farmhouse. Beau and Ann still live in this renovated building today, while Jonny and his family live up the road.

‘‘It was like winning a place in MIQ, really. It is just as significant to win a ballot to get back into New Zealand as it was to get a home and land package then,’’ Beau Trevathan said.

Mr Trevathan said the intention of subdividing Morven Hills had actually been to create a labour force to work the remainder of the station, but when some of the new landowners could not sustain production, their sections were gradually acquired by neighbours.

George and Eva had six children — five survived infancy — and extended their holding when they bought their neighbour John Brown’s property.

Getting water to the dry, barren and treeless land was challenging in the early days, so the early community, including Beau’s grandparents, resorted to canning and selling rabbit meat.

‘‘At the time, it was suggested the Government would put in a water scheme but World War 1 intervened and they had no manpower to put it in . . . They lived on the proceeds of rabbit skins and the meat was canned and sold. There were plenty of canning factories. It wasn’t farming as we know it today,’’ Beau said.

Their eldest son Mervyn and his wife Yolande ‘‘Russell’’ became the second generation of Trevathan farmers.

Mervyn and Russell bought a Maori Point section and extended the original farmhouse to more comfortably accommodate their daughters, Joy, Gaynor and Dawn, and son Beau.

They also put electricity and water on to the house in 1951, added a bathroom and flush toilet, and a coal range wetback.

‘‘So that was the end of carrying buckets of water from the race. They had a bore, which is still used today. We have the same pump. A bit like granddad’s axe, it’s had a few handles,’’ Beau said.

Beau’s mother established a big garden and planted many of the mature gum and walnut trees on the property today.

Beau, born in 1951, was barely 20 when his father died and he bought out his family.

He bought three more titles from Victor Davidson, himself a multi-generational farmer.

‘‘When you are talking multi-generations we are not unique. Many of the properties in Tarras have been farmed by at least three generations and the ones that are still here today are mostly multi-generational farmers. In this district, I think that’s probably quite unique,’’ Beau said.

He and Ann Anderson married in 1982, and did more alternations to the house.

They have two children —Jonny and Anna who now lives on a Manawatu dairy farm.

One of Ann Trevathan’s first jobs as a Tarras ‘‘landgirl’’ was to sit on a tractor and drive it around the paddocks.

All the fences had been pulled out so Lindisvale could be worked as one block, redeveloped with border dyke irrigation, and refenced.

The border dykes are still there but Beau says the system has a limited life now and the family has moved on to K-line irrigation.

Jonny has leased most of his parents’ property, except for a deer unit his father established around 2000.

He is using newer irrigation methods to develop the land and most of Lindisvale is now in pasture or crops for heifers.

With bore irrigation and better water efficiency, Jonny is now producing 400 tonnes of beef and 25 tonnes of lamb. He’s also trying new pasture species.
Beau reflects that each generation has had a completely different farming experience.

The first generation ‘‘farmed’’ rabbits, the second put in border dyke irrigation, the third expanded that system and the fourth is taking it out.

Over the last 106 years, the land has produced wool, small seed and grain, fat lambs, milking cows (by hand), and cream. It has also supported a Southdown sheep stud, potato crops, cattle, deer, and horses, he said.

Beau and Ann described Jonny as part of the new generation of farmers who were borrowing money with confidence.

Economic circumstances in the 1980s meant they did not borrow money to develop and decided to remain dry land farmers.

‘‘In the 1980s, interest rates went up to well over 20%, up to 28% for some. A lot of farmers went to the wall . We struggled through that period. We lost confidence in a big way. Once we got out of that situation, there was a fear of borrowing money . . . We chose to farm without stress and debt. But Jonny’s generation has no fear of debt,’’ Beau said.

Earlier generations were isolated, did not have convenient access to services and relied on neighbours.

‘‘But Jonny’s generation have surrounded themselves with really good advisers and support so they do all they do with confidence. They can do what they do without praying they are doing the right thing,’’ Beau said. ‘‘Oh, I still do a fair bit of that,’’ Jonny quipped.

‘‘Conversations about money still do happen. We always say when we get over $200 a lamb — but we might not say when we lose $30 a lamb,’’ Jonny said.
Jonny’s network includes a local Beef + Lamb Red Meat Profit Partnership group.

‘‘Each month or so we visit a different member’s property and chew the fat and see what they are doing, what they could change, what we could learn. It gives you confidence, when you see six people all saying the same thing,’’ Jonny said.

‘‘I have ideas when I am sitting on the tractor at night . . . One of those was changing pasture mixes, changing away from ryegrasses and more productive grasses like legumes,’’ he said.

Another ‘‘night on the tractor’’ idea was to have a go at growing vegetables.

This year Jonny and Paula have sowed just under half a hectare with potatoes, peas and salad basics, to be ready by Christmas.

Like his great-grandparents, he still has rabbits, but a contract shooter earns income off them.

One of the biggest changes facing today’s Tarras farmers is a proposal to build an airport.

It won’t be until 2023 that the community will know for sure if the developer, Christchurch International Airport Ltd, will proceed.

CIAL conceived the idea pre-Covid-19 and is doing feasibility studies.

The Trevathans were not keen to engage in airport politics but generally supported change that would boost district opportunities and the Tarras School roll.

‘‘Wait for them to put some facts on the table. Let them do the studies,’’ Beau Trevathan said.

‘‘The world is now a different place to what it was when those plans were being hatched.’’