Oregon couple living the dream despite problems with predators

Bill and Sharon Gow reckon they are living the dream.

The American ranchers, who were holidaying in New Zealand recently, run a cow-calf ranch in Roseburg, Oregon.

The operation was recently taken over by their son, Colton, although they still remain involved.

The couple are first-generation ranchers. Neither comes from a farming background, although it was Mr Gow’s lifelong dream from when he was a child.

Mr Gow was previously an iron-worker building high-rise buildings and bridges to help finance the venture into ranching.

Originally, they bought a ranch that was a foreclosure and needed much work. They had added further land over the years and the family now owned about 1000ha, leasing a further similar-sized area.

The said they ran only cattle as Oregon was not suitable for sheep given the problems with predators in the state.

Predators included coyotes, cougars and bears, and wild deer were being driven to the cities and towns because predator numbers were out of control.

The keen rodeo enthusiasts have an indoor arena on their property and that sometimes attracted the deer as a safe haven.

Given the extensive nature of the operation, it was difficult to ascertain exactly what their stock losses were, Mr Gow said.

Asked how they coped with the predators — there were also rattlesnakes — he said they just learned to deal with it.

The biggest problem at the moment was with ‘‘greenies’’ wanting to protect everything, including predators, which was a big issue for the farming community.

Their commercial cattle herd was a Hereford-Angus cross base and they used the old-fashioned method of roping to brand the calves. 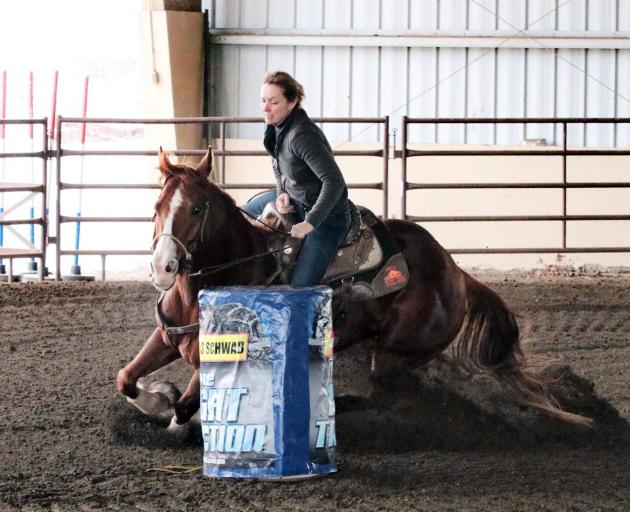 They had recently endured a ‘‘horrible’’ drought in one of the worst autumns seen in Oregon.

There was no rain from May until November and, by the time the rain did come, it was too late for grass growth.

So the cows went into winter in poor shape and farmers were now paying the consequences of that.

They also had much forestry ground and logging provided a supplementary income. There had been record prices in the spring but prices had tanked in the past six months, Mr Gow said.

They had a cabin on their property and also offered guided hunts. On his return to the US, Mr Gow is heading out turkey hunting.

Asked about the state of the agricultural industry in the US, Mr Gow said the problem was with increasing costs which were cutting farmers’ margins.

There was not nearly as much regulation as in New Zealand, he believed, but there was a lack of understanding about farming by urban folk and that was proving frustrating.

‘‘We do what we do because we’ve learned that’s what works best. It’s frustrating to say the least,’’ he said.

The couple would not change their lifestyle; they lived a ‘‘wonderful’’ life in the country and worked together as a family.

Everyone ‘‘pitched in’’ and helped whoever needed it and that made it all very easy.

Having their son run the ranch had ‘‘worked out perfect’’ as Mr Gow was ready to slow down. Their daughter, Bailey, lived close by.

‘‘There is not a better lifestyle than agriculture to raise your kids. We’re living the dream, we really are,’’ he said.

The couple have three grandchildren who were already getting into ponies and looking to continue the family interest in horses.

As their own family was growing up, they all competed at rodeos together. Mr Gow is a team roper while his wife is a keen barrel racer. Having an indoor arena meant they could practise throughout the winter.

Both had accidents last year — Mrs Gow broke her leg when a horse fell on her, while Mr Gow was bucked off a horse and ruptured his Achilles. He was still limping and had not been able to rope.

They trained many horses and had about 20 horses on the ranch. They usually sold three or four a year.

It was Mr Gow’s second visit to New Zealand while his wife was on her first trip. They were enjoying seeing some different farming operations — they were impressed by how progressive New Zealand farmers are — and they also attended the Waikouaiti rodeo.

Their property was similar to the New Zealand high country and the climate was similar, they said.