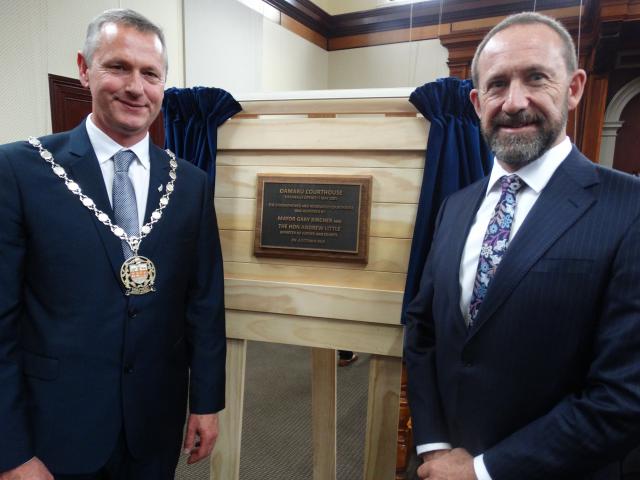 Speakers at the reopening of the historic Oamaru courthouse were glowing in their praise for the newly-restored building.

And just like that, the pressure is back on the Hurricanes.

Two wickets and a key catch to all-rounder Corey Anderson has put New Zealand in a solid position after day two of the second cricket test against the West Indies in Wellington.

After spending the past 10 days as an unused substitute for the All Whites, Ben Sigmund is itching to get on the field for the Wellington Phoenix in Sydney tonight.

If the All Whites can't achieve the near-impossible with a big win over Mexico at Wellington's Westpac Stadium tomorrow night it will be coach Ricki Herbert's last game in charge.

World No 5 Lydia Ko will make her professional debut this week at the CME Titleholders event in Florida on the LPGA Tour.

Ernie Merrick's vision of Louis Fenton playing at right back for the Wellington Phoenix may finally take shape across the Tasman against the Melbourne Victory on Monday night.

This week's Oceania Cup marks the start of nine hectic months for the men's Black Sticks.

Tasman will join the big boys in the ITM Cup's Premiership division next season after they beat Hawkes Bay 26-25 in the Championship decider in Nelson tonight.

Given it's finals weekend in the ITM Cup it's only fitting that Canterbury are playing.

When 21,500 Western Sydney Wanderers fans are hurling abuse at the Wellington Phoenix tomorrow, at least Ben Sigmund will be able to look across the field and see a familiar face.

Unlocking the secret to improved performances on the road will go a long way to helping Auckland in their ITM Cup semifinal against Canterbury in Christchurch this afternoon.

Wellington will host next weekend's ITM Cup Premiership final after they beat Counties Manukau 41-5 in the capital tonight.

Wellington Phoenix coach Ernie Merrick will leave it late to decide on his right back for Sunday's outing against the Western Sydney Wanderers at Parramatta Stadium.

When Matt Proctor left Toll Stadium in Whangarei after round four of the ITM Cup he thought his season was over.

Ihaia West has fond memories of his last trip to Dunedin.

Auckland will know their fate in the ITM Cup semifinals picture at around 4.20pm today.

Watching the Wellington Phoenix this season will need to be done with a dose of perspective.

The ninth season of the A-League gets underway across the Tasman tonight when Sydney FC host Newcastle. APNZ's Daniel Richardson takes a look at the teams involved.