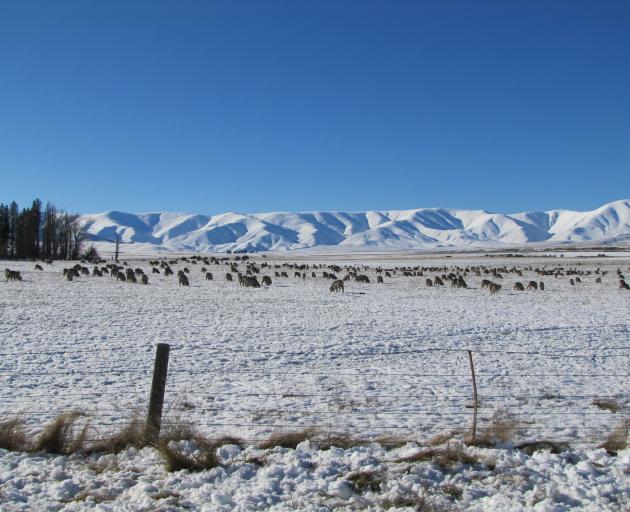 Sheep and beef farmers are most concerned about commodity prices; pictured, stock against the backdrop of the Hawkdun Range in the Maniototo in July. Photo: Pam Jones
Farmers' confidence in the year ahead has taken a nosedive with concerns over government policies and volatility in commodity prices.

Given the increased pre-election scrutiny of clean waterways, irrigation issues and intensive farming practices, the rural sector will be holding its breath as coalition talks thrash out policy bottom lines.

In a separate ANZ business outlook survey yesterday, the political uncertainty also sparked caution in September with business confidence falling to a net zero reading, its lowest level in two years, where there were as many pessimists as optimists.

The ANZ result was down from a net 18.3% of firms that had expected general business conditions to improve over the coming year in August.

Rabobank New Zealand general manager for country banking Hayley Moynihan said this was the most concerned farmers had been about the influence of government policies in the past seven years, since the survey began in mid-2011.

''With the country in election mode in recent months, government policy was found to be figuring as a significant concern for those farmers taking a more negative outlook on the year ahead,'' Ms Moynihan said.

A Rabobank spokeswoman said the ongoing coalition negotiations would prolong the uncertainty that farmers were feeling, in regard to government policy.

The key reasons cited by farmers expecting the performance of the agricultural economy to worsen in the coming 12 months were 46% concerned with government policies and 42% with falling global commodity prices.

''Policies relating to the farming sector featured prominently during the recently completed election campaign, and the prospect of increased government intervention within the farm-gate appears to be a contributor to the dip in farmer confidence,'' she said.

With National, Labour, New Zealand First and the Green Party yet to begin formal coalition talks, Ms Moynihan said farmers would have a much clearer idea of what, if any, changes they might face once negotiations were completed

Those with the sharpest decline in confidence were sheep and beef farmers, whose confidence reading plunged from 53% being positive to 22%.

As with expectations for the overall economy, sheep and beef farmers registered the biggest fall on this measure, dropping from a reading of 41% positive last quarter to 28% this quarter.

''This is likely to be a reflection of record high beef prices now easing, and while lamb prices have strengthened, these may not be sustained for the full season,'' Ms Moynihan said

Dairy farmers also notched a decline, but only down from 58% positive to 50%.

Following recent positive full year reports from Fonterra and Synlait, the pair had also forecast higher farm gate payouts for the new season, buoying confidence in the sector, which has had poor returns for two out of the three previous seasons.

Ms Moynihan said the reading for farmers confidence in their own business performance dropped marginally from 47% positive to 44%.