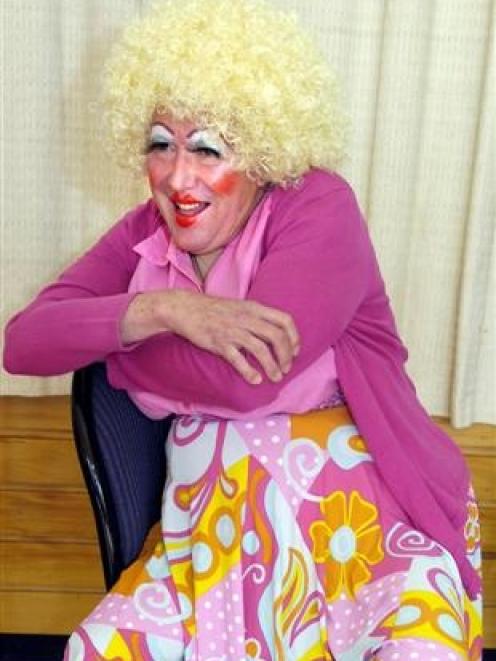 David McPhail as Dame Hilda Hardup in Jack and the Beanstalk. Photo by Jane Dawber.
New Zealand's favourite funny man, David McPhail, has been playing serious roles on the stage. But now he's in a cheeky pantomime at the Fortune Theatre and planning to bring satire back to television. Kim Dungey reports.

David McPhail sees today's politicians as good fodder for the new satirical television show he and Jon Gadsby are planning.

Ideally, the programme would have been airing in the lead-up to the election, he says in a break from rehearsals of Jack and the Beanstalk at Dunedin's Fortune Theatre.

But perhaps it would be better next year, when people realise the promises made haven't been kept.

McPhail and Gadsby was a classic 1980s television show that featured impersonations of key public figures such as autocratic prime minister Robert Muldoon.

But McPhail, one of the country's best known comic writers and performers, says there is a whole generation of people who have not seen that sort of political satire on television.

While still working on the new show's format, McPhail believes Labour leader Helen Clark would be an easier target for satire than the more cautious John Key.

Mr Key does not need to be outrageous, he adds, when he has people like his immigration spokesman, Lockwood Smith, saying Asians have small hands that make them more productive and Pacific workers need to be taught to use toilets and showers.

Some might say politicians are not as interesting as they once were, but McPhail gives the example of Jim Bolger, prime minister from 1990 to 1997: "It was very difficult to do anything satirical about him because he was so bland and so good at satirising himself, unintentionally sometimes . . .".

His most famous subject, Mr Muldoon, served as prime minister for three terms until 1984, when he called a snap election and lost.

McPhail is still asked by people of "a certain age" to reprise the role - adopting the exaggerated hunch, dimpled cheek and cackle of the man called "Piggy" Muldoon - but these days he declines.

While Mr Muldoon had to be admired for his "enormous streak of self-confidence", he was also a bully who struck fear into those people whose lives he could influence, he says.

One time, he recalls, he and Gadsby were performing at an Auckland nightclub when they were told Mr Muldoon would be in the audience.

McPhail saw "this dome of a head caught in a spotlight" and went ahead with his parody.

Afterwards, he was in the dressing room when "suddenly the door burst open and in "he" strode with Thea, his wife, another MP and a photographer from The New Zealand Herald".

The Prime Minister put his arm around McPhail and ordered him to put his Muldoon "face" on.

McPhail said he would stand with him but not pull the face.

The next day the photo appeared on the front page of the newspaper.

"We looked as though we were friends and I know he did that deliberately . . . It undercuts you entirely as a satirist ...".

When McPhail and Gadsby ended, McPhail assumed someone else would fill the role, but not many young people in the industry were interested in politics.

"There was a new generation of comedy arriving - Rik Mayall and The Young Ones - and a lot of guys went to do that sort of stuff. It was outrageous but more social than political comedy."

It was also about that time it became "completely improper" for men to dress up as women characters, he says, glancing at the garish skirt he wears as the Dame in Jack and the Beanstalk.

It is the first time he has worn heels since parodying Tina Turner and Dolly Parton in the late 1980s.

"When I first arrived here, I thought this was a very bad mistake . . . But I suppose the thing for me was I'd never done pantomime before."

McPhail plays a dame who is down on her luck and trying to push son Jack (played by Ashley Hawkes) out to work.

"I've had husbands, but I can't remember how many. I only link them into the dwellings I've shared with them, all of which have been caravans."

Afraid he will get into trouble, his mother follows him.

The role brings McPhail back to a city in which he first worked in the early 1970s.

After completing a television producers' course, he was sent to Dunedin, which he thought would be an outpost of the Empire and the death of him.

Instead, he learned an "enormous" amount producing, among other things, a live two-hour show for housewives.

Throughout his career, he has had to contend with a stutter.

When young, he was "virtually unintelligible".

As a newspaper journalist, he found it difficult to talk on the telephone to people he didn't know.

Later, he had to "steel" himself to appear in front of a television camera.

Though smoking disguises the condition and it is not generally a problem when reciting lines, it is still there - just not as obvious.

In the past decade, McPhail has directed and performed at Christchurch's Court Theatre.

But Seven Periods with Mr Gormsby, a comedy set in a high school in which he played a cringe-making old-school teacher, took him back to television and he realised how much he had missed it.

Since then, he has worked with his director son, Matt, on the children's television show, Amazing Extraordinary Friends.

McPhail plays an ageing superhero called The Green Termite, a role that requires him to pull on baggy Y-fronts over green lycra tights.

Today, though, it is green fishnets and pink legwarmers he is wearing.

It's a "bit of a switch" from the King Lear role he played a couple of years back, he says.

"But it's one of those challenges. You're asked to do it, you've never done it before and you have to see if you can."

The part of Dame Hilda Hardup is like any other in that he has to believe in what he is doing, he says, smiling.

"If you had the slightest doubt about walking out dressed as I am, in high heels, in front of intelligent adults and insensitive children, then you shouldn't do the role because they will see right through you."