All in the family 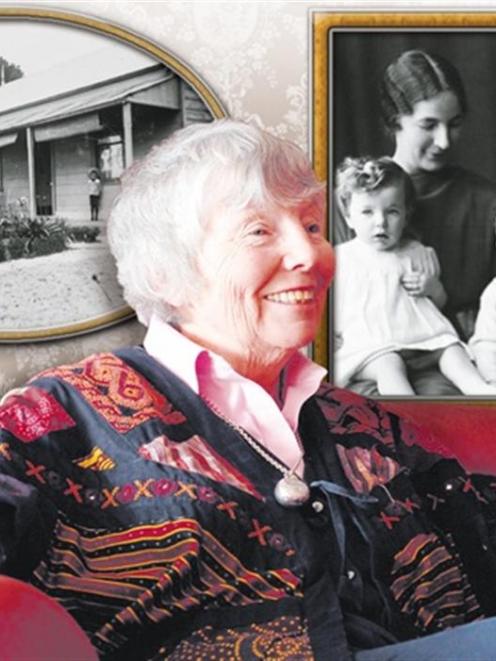 A biographer tackles her own family. Top left: Angus Harrop as a child in Hokitika, 1907. The photograph that sparked the family history. Top right: Hilda (nee Valentine) and Angus Harrop with Ann and David, in Wellington on their 1934 trip to New...
When you research your family history, you are bound to come across skeletons in the cupboard and unattractive ancestors, as well as poignant stories and funny moments. Charmian Smith talks to British writer Ann Thwaite about Passageways, the story of her New Zealand family.

When Ann Thwaite and her brother David Harrop were researching family history for Ann's recent book, Passageways: The story of a New Zealand family they came across secrets, family feuds and painful events as well as happy ones.

Her family isn't necessarily more interesting than other people's, she says, but as a biographer and children's writer, she knows how to tell the stories.

She is touring New Zealand with her brother for the launch of the book that tells the story of their family, from the eight great-grandparents who came to New Zealand between 1858 and 1868, to their parents' move to the United Kingdom in the 1920s and their own time in New Zealand, separated from their parents, during World War 2.

"I'm interested in far more than the dates of birth, death or marriage for a family tree.

"I want to know what happened to my subjects, why they did things," she said.

After 40 years of writing biography, delving deeply into other people's family histories, she realised she knew very little about her own.

"Of course we discovered all sorts of secrets and tensions and distressing things as well as interesting things.

"I was very lucky my parents turned out to be rather good people.

The trigger for the book was a 1907 photograph of a boy on a veranda and realising it was her father, aged 7, taken just after his mother's death.

One of the first shocks she and her brother found during their research, was her grandmother Bertha's death certificate which showed she had four children when she died in Hokitika.

They had only known of two, their father Angus Harrop and their aunt May.

It turned out the baby Eva, after whose birth Bertha had died, survived only a few months, but the other child, Frederick, had cerebral palsy.

He was looked after at home until his father's death in 1919, then put in the care of a special school with a legacy from his father, but later lived at Seacliff Mental Hospital, near Dunedin, until his death in 1951.

He was never mentioned by the family.

People were not open about these sorts of disabilities in those days, she says.

"I read those papers [from Seacliff] with tears pouring down my face.

"It was really worrying to imagine that boy especially now we know there was a chance his brain was functioning properly.

"It's painful to talk about it even now.

"In my father's diary, when he was at Waitaki [Boys High School] in 1918 he sent his brother books for his birthday.

"His father, in a letter - one of the few surviving letters of his - said Fred was pleased.

"Would he have sent books if they didn't think he had some function?"

More distant, although direct, ancestors were a "disgraceful old couple" Archibald and Charlotte Valentine, a drunken tailor and his wife who followed their son, Archie, to Waikouaiti from Scotland in the late 1860s after he was well settled, much to his dismay.

"Both my grandfather [James Valentine] and his sister [Win] my great-aunt wrote about these people in a way that was quite surprising for Victorians.

"I think they wanted to emphasise how remarkable their own father [Archie] was to have come from this sort of background."

Mrs Thwaite's own parents, Angus Harrop and Hilda Valentine, both born in 1900, met playing tennis in Hokitika when they were high school pupils and both went to Canterbury University, graduating in 1922.

Hilda initially planned to come to Otago, but won a Gammack Scholarship to Canterbury.

That is where they really got to know each other.

"If she had, in fact, gone to Otago I wouldn't exist.

"That is one of the fascinations about family history - the fact that one is here at all," Thwaite says.

Hilda had grown up in Timaru, where her father Jim Valentine had been a headmaster.

He and his family moved to Hokitika as a schools inspector and Thwaite likes to think of him and her other grandfather, Arthur Harrop, who was a surveyor, both riding up and down the wild West Coast for their work.

While a student, Angus Harrop worked for The Press in Christchurch, then went to Cambridge University to study in 1923.

Hilda joined him three years later and they married.

Despite living in England for the rest of their lives, the Harrops maintained strong New Zealand connections.

Dr Harrop was the University of New Zealand representative in the UK, organising exam papers, external examiners and selection committees.

He and Hilda also established New Zealand News, a newspaper that kept New Zealanders living in the UK and Europe in touch with what was happening at home, and hosted New Zealand visitors.

Dr Harrop wrote for New Zealand newspapers, particularly The Press, as well as working as a journalist in London with the Daily Mail, the Daily Telegraph and other British newspapers.

He also wrote history and biography, including The Amazing Career of Edward Gibbon Wakefield (1928), England and New Zealand (1926) and England and the Maori Wars (1937).

In 1934, the Harrops and their two children, David (2) and the 1-year old Ann, sailed to New Zealand to visit friends and family.

Typically, Angus had a contract to write a book, Touring in New Zealand, to promote the country both to New Zealanders and visitors, which would pay for their holiday.

Thwaite tells of their busy life in London on their return.

Little affected by the 1930s Depression, they were relatively well-off, with German au pairs and a suburban house and garden.

Many children were evacuated from Britain, not only to escape the bombing, but because there was a strong chance that Hitler would invade.

Thwaite's husband, Anthony Thwaite was evacuated to the United States as a child, but with family and strong New Zealand connections, the Harrops decided to send their children here.

In 1940, Mrs Harrop returned to New Zealand with her two children who were to stay in the country for the duration of the war while she undertook the dangerous journey back to the UK to be with her husband.

On the way, in a blackout near the Cape of Good Hope, their ship collided with another and they were stuck in South Africa until they could get a passage to New Zealand. For four years Ann boarded at Marsden School in Wellington, and her brother at Southwell in Hamilton, and then at Waitaki Boys.

Their aunt Win had helped her out in her last years when her own family had ignored her, and Win knew David had studied agriculture and wanted to farm.

It was another of those serendipitous turns that you come across in family stories, Thwaite says.

She thinks her early adventures contributed to her writing for children.

"I was able to remember what it felt like to be 7 when I left England, have my 8th birthday in South Africa and 9th in New Zealand, then coming back to England when I was 12.

"I had a much stronger feeling, I think, what it was like to be a child.

"If you spend all your life in one place it's much more difficult to remember what it felt like at different ages."

Her first book, The young traveller in Japan, was published 50 years ago and written when she was in Japan with her husband and baby daughter.

"I was very much aware that children's books were undervalued.

"One of the reasons I started writing biography was because I got fed up at literary parties when people asked what I did and not being interested when I said I wrote children's books.

"My husband was literary editor of the [English] Listener, and The New Statesman, so all my life I've been mixing with writers.

"My first biography was definitely an attempt to show that I could write something that adults would want to read as well."

Following Waiting for the Party, her biography of children's writer Frances Hodgson Burnett, came those of Edmund and later Philip Gosse, Emily Tennyson, and her 1990 Whitbread winner, A. A. Milne: His life.

Apart from Milne, the others were obscure, but their books had made an impression on her younger self, she says.

Thwaite still thinks the effect of a book on a child can be much greater than the effect on an adult.

Apart from a brief afternote, Passageways does not go beyond the end of World War 2 and her and David's return to England with their father in 1945.

Her life is another story, she says, but she does not plan to publish it.

Now a sprightly 77, she contends this is her last book, and her last trip to New Zealand.

The time change and jet lag is getting too much for her, she says.

The answers are online

"You may think you don't know anything, but start looking and with a bit of patience and perseverance, it's amazing what you can find, especially on the internet."

One of the problems is that you can go on researching for ever if you want to find every last third cousin, she says with a laugh.

Things keep turning up - one of the last pieces of information she was able to include in Passageways, was from an obituary of her father's grandmother, Sarah Harrop, in the Tuapeka Times.

She and her husband James went there when they first arrived in New Zealand in 1863.

"It told us a lot of things we didn't know at a very late stage.

"She'd actually died in Hokitika so there was no reason why we would have been looking at the Tuapeka Times, but you can do a word search. It's amazing."

However, Thwaite herself does not use computers or email.

"I hate them, I won't have anything to do with them. My brother thinks I'm mad, but I don't even type.

"When I was growing up, if you typed, you became a secretary and that was the last thing I wanted to be.

"I always wanted someone else to type things I'd written.

"I have this wonderful woman who can read my handwriting and has been working for me for 25 years.

"Her brother David did most of the internet research while she trawled through family papers.

"Luckily, her parents didn't throw away letters and diaries, and other members on her mother's side had written unpublished memoirs.

"Not every family has such treasures - there was very little known about her father's side, she says.

Passageways: The story of a New Zealand family by Ann Thwaite is published by Otago University Press (pbk, $45)