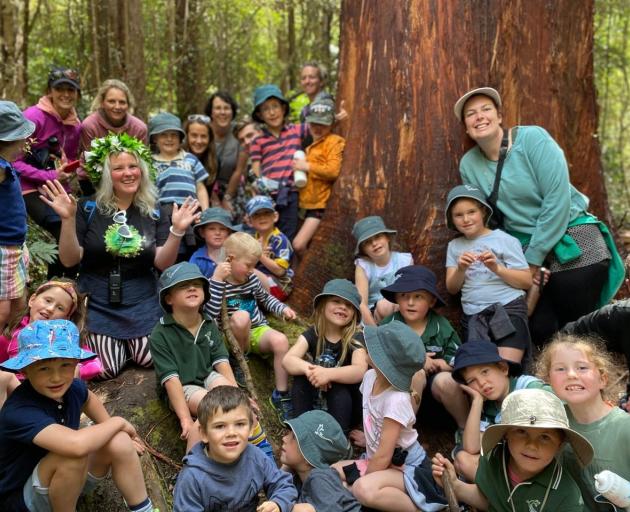 Tahu Mackenzie (left) calls kindergarten pupils visiting Orokonui Ecosanctuary her ‘‘Ecowarriors’’. PHOTO: OROKONUI ECOSANCTUARY
Alyth Grant has been finding out about developments in Orokonui’s education programme by talking to those who engage with it. 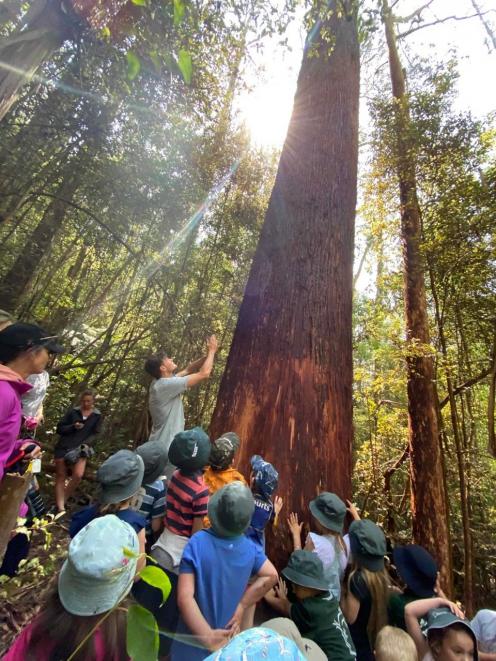 A rimu is a source of wonder for young nature learners. PHOTO: OROKONUI ECOSANCTUARY
A green ribbon runs through the educational story of Ellen Richardson, author of the previous Wild Ways story, a ribbon she grasped at age 14, as a year 9 pupil at Columba College when on a school camp at Doubtful Sound.

Tahu led the girls out into the wild, finding "cool things" in the stream, glowworms in the dark, dolphins in the sound.

Ellen’s fascination with the outdoors and questions of conservation took root in that experience and led naturally to the study of ecology and botany at university.

Frequent visits to Orokonui as a student were a refreshing "escape from living in the city" and talks with conservation manager Elton Smith intensified her focus on the idea of regenerating our wild, reintroducing the species that were once here, and "protecting this little patch". Always keen to learn more, she volunteered her time to Tahu’s education team, learning from others, developing communication skills and discovering an enjoyment of working with children. And so it came about that, having completed her BSc, and looking for a research project for a master’s degree, the suggestion that she study the translocation of jewelled geckos within the ecosanctuary seemed the perfect fit. With her thesis submitted, she is now contemplating the many career options open to her.

Tahu’s influence and effectiveness in her work at Orokonui since 2009 has been acknowledged in several awards. She was named Kiwibank New Zealander of the Year Local Hero in 2019, and Person of the Year 2020 in the Otago Hall of Fame Awards.

For many children, learning with Tahu begins early, at pre-school age. For five years now Port Chalmers kindergarten children have been going out to Orokonui in all weathers, as do children from the Pioneer child care organisation. Tahu calls them her "Ecowarriors". 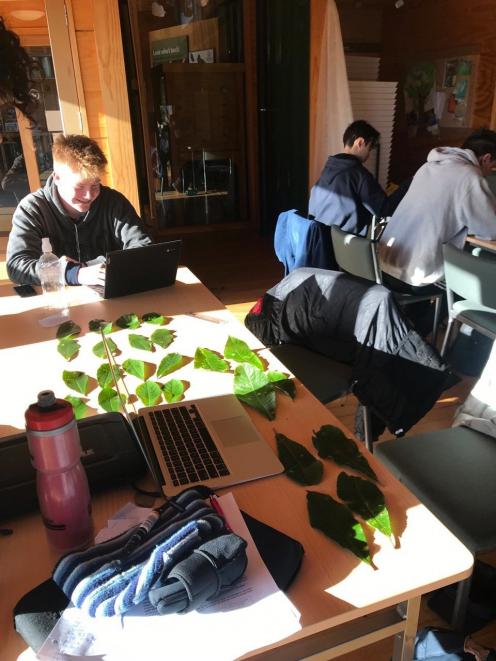 Art Hurring records data to calculate leaf surface area. PHOTO: VICKI JOPSON
Asked what such little ones get out of it, their minders are enthusiastic. The outdoors provides all kinds of fun experience, from going for long walks, stomping in mud in their gumboots and tolerating getting a bit wet. Even having a cold nose teaches them about nature, as they observe that on cold-nose days the skinks are not to be seen.

Looking closely at things in nature gives reign to a child’s capacity to wonder, and to begin to understand what it takes to care for their world. Kaitiakitanga becomes a part of their thinking and the experience at Orokonui, close as it is to Port Chalmers, strengthens their sense of community.

More than 150 primary and secondary schools throughout the region have been able to benefit from the roaming contract Orokonui holds with the Ministry of Education, which allows Tahu and her team to run programmes in easier-to-access places such as Dunedin Botanic Garden. Students of Green-Gold Enviroschool Opoho have that way deepened their understanding of biodiversity and what they can do in their own backyard.

Primary schools in Orokonui’s halo area in Waitati, Purakaunui and Port Chalmers are very much part of the growing community engagement, getting involved in restoration of the habitat around their school by planting native trees and trapping for predators. Young as they are, they have become "citizen scientists", studying the interactions between their cats and traps and presenting the results to the public.

Research being carried out at Orokonui into kaka has sparked some very creative responses: Port Chalmers children wrote a waiata, while Purakaunui wrote a mystery play about kaka. All are ways of communicating what they have learned to a wider public.

Learning to connect with an audience is an essential skill for scientists. Students such as Ellen and Taylor Davies-Colley, who have volunteered with the education team, say developing communication skills appropriate for varying age-groups is key. As Taylor — now himself a member of Orokonui’s team — put it: "Science must translate to people".

To underscore the high value the university places on this, the division of science at Otago has established an "Outreach Certificate", which a student may earn in addition to their academic qualifications by "engagement in the community that is not part of their course work", for example by going out into schools, contributing to the Science Festival, or volunteering at Orokonui. Such work, involving a minimum of 60 hours, must be documented and approved by an appropriately qualified person, such as Tahu. The certificate attests to the breadth of a young person’s outlook and experience.

While research carried out at Orokonui by university students has been the subject of many Wild Ways columns over the years, research involvement by high school pupils is a newer development, made possible by the flexible structure of NCEA.

Pupils of King’s High School (and OBHS) have gained credits for level 3 biology at Orokonui, studying how changing environmental conditions affect plant growth. The theoretical preparation in terms of plant physiology and experimental design is done at school, then during an intensive three days at Orokonui, they carry out their investigation with support of the Orokonui education team.

Their teacher commented: "The boys like the hands-on, real life link to what would otherwise be limited to classroom lab work. They enjoy being outside, collaborating with each other and the connections with Taylor and the university."

The scientific results of their study can gain them level 3 NCEA biology, while their written report can be submitted for level 3 English.

Integrated theory and practice, collaboration and communication skills. All are key aspects of science education today. Orokonui’s role in conservation is well known, in Ellen Richardson’s words, "bridging the gap between intensive work to restore healthy populations of rare species and the advocacy side", teaching people — from children onward — to value those taonga species. But it also has a vital role in helping to raise generations whose understanding of what it takes to be "green" is rooted in science and its application in the environment.

Alyth Grant is a retired educator and volunteer at Orokonui Ecosanctuary