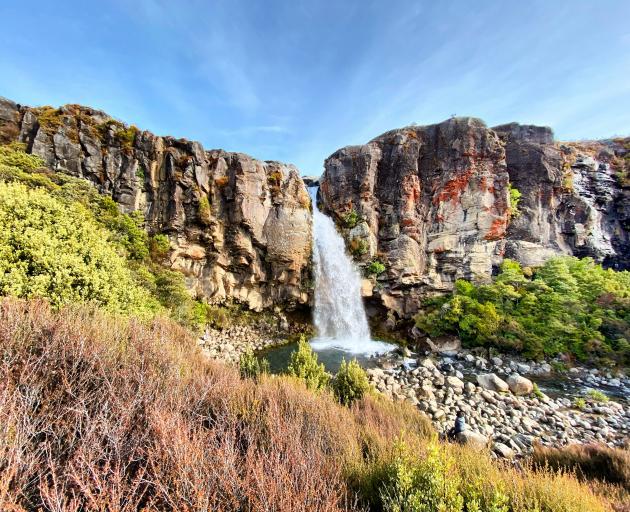 One day I'll do the Tongariro Alpine Crossing. And I mean it: one day it will indeed happen and when it does, I've got zero doubt it'll blow my procrastinating little mind.

But I have a sneaking suspicion there's a part of my brain that thinks I've already gamed the system and found a way to knock off most of the greatest hits of the famous 19.4km, seven-hour hike without ever actually having to do it. 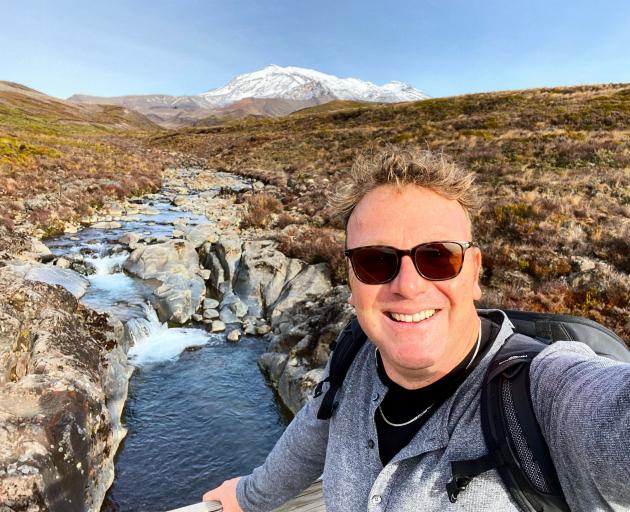 Tim Roxborough takes in the views along the track.

I first found out about the Taranaki Falls Track by accident. It was some years back and I was on assignment at the Chateau Tongariro, almost certainly the most recognisable historic hotel in the country. As a hotel buff, I'd always wanted to stay at the Chateau, but beyond the walls of this 1929-built, Georgian-styled, Canadian-inspired property, I knew embarrassingly little of the national park that surrounds it.

The quick back story to Tongariro National Park is that not only is it the oldest national park in New Zealand, it's the sixth-oldest in the world, created in 1887. For generations this land has been of enormous spiritual significance to Maori and there was the very real fear it would be seized by European settlers. So instead, something quite extraordinary happened: led by the paramount chief Horonuku Te Heuheu Tukino, the local iwi — Ngati Tuwharetoa — gave their sacred land to the Crown on the condition it would be permanently protected for all peoples. The generosity, the foresight and the magnanimity of this gesture will always get me.

What began as 26sqkm of spectacular alpine terrain gradually expanded over the years to the 796sqkm that has comprised Tongariro National Park since its last enlargement in 1975. And through it all, those three volcanic peaks of Mt Ruapehu, Mt Ngauruhoe and Mt Tongariro have been the very heart of the park.

The Chateau — sitting 1100m up the slopes of the 2797m Mt Ruapehu — arrived at the end of the 1920s, to encourage tourism to the park, and there's simply no approach by car to a hotel in New Zealand as fairy tale-like.

Speaking of which, one of the reasons I keep returning to this part of the country is that there is something enchanted about so much of what you see. A couple of weeks ago I was in Taupo for a long-awaited catch-up with a bunch of mates who’d hired a house for a weekend of shenanigans, tomfoolery and general silly-buggers. A boys’ weekend. But when the early winter’s day dawned blue and calm, I insisted any shenanigans be delayed and we head south to the national park. 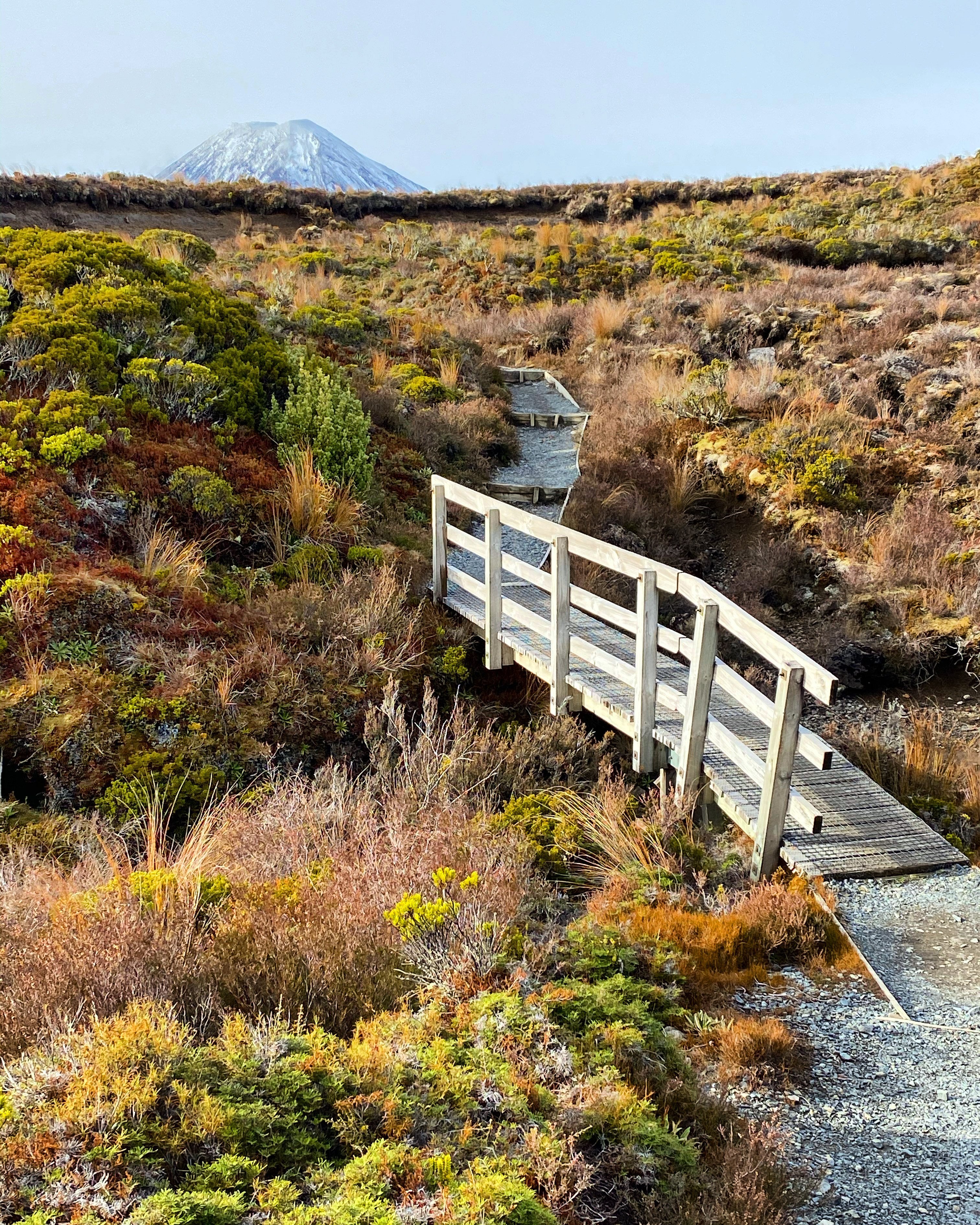 The reasoning was simple. I’ve done the Taranaki Falls Track in the bleakest of weather, where fog and sleet hide the mountains and you have to guess where the Chateau might be. And even then, it still casts a spell. But to do it in perfect weather? Saying no wasn’t an option.

The drive from Taupo to Whakapapa Village and the Chateau is about 80 minutes and if you’re feeling keen, you can do what we did and add the easy 6km, two-hour Lake Rotopounamu loop to the day’s calorie burn, as it’s directly on the way. Just 10 minutes from Turangi, Lake Rotopounamu sits on the edge of Tongariro National Park and is a small, gorgeous body of water enveloped by some of the North Island’s most jungle-looking native forest.

It’s then 25 minutes from Lake Rotopounamu to the Chateau, where we popped in for lunch, as well as the compulsory photos of the 2291m-high Mt Ngauruhoe/Mt Doom as seen from the lobby. On a "bluebird" day, as the skiers and snowboarders among us say, the hotel’s framing of the mountain Peter Jackson made an international celebrity out of (thanks to Lord Of The Rings) never fails to stun.

Indeed, the dramatic cone of Mt Ngauruhoe is a recurring presence on the Taranaki Falls Track, as both ends of the two-hour loop begin and end right by the Chateau. But as much as those views had us almost continuously snapping photos, a good deal of the magic of this walk is that you keep going from the reds and yellows of the tussock and tundra to suddenly being swallowed by the mosses and dripping greens of native beech forest.

As for the falls themselves, they’re at the track’s midpoint and plunge 20m over boulders into a pool below. The track then descends down a winding series of steps until you’re next to a river and a tree-line that visually transports me to places like Oregon or Alaska, where you half expect to see bears catching salmon. I’m not sure if there’s a more varied, more consistently amazing two-hour walk in the country: snowy mountains, steep volcanoes, lush rainforest, tussock and tundra, waterfalls and an iconic hotel to boot.

As a test cricket purist, I’m not saying the Taranaki Falls Track means you’re off the hook on doing the Tongariro Alpine Crossing, but this sure is one unforgettable T20.