University food prices cause some concern 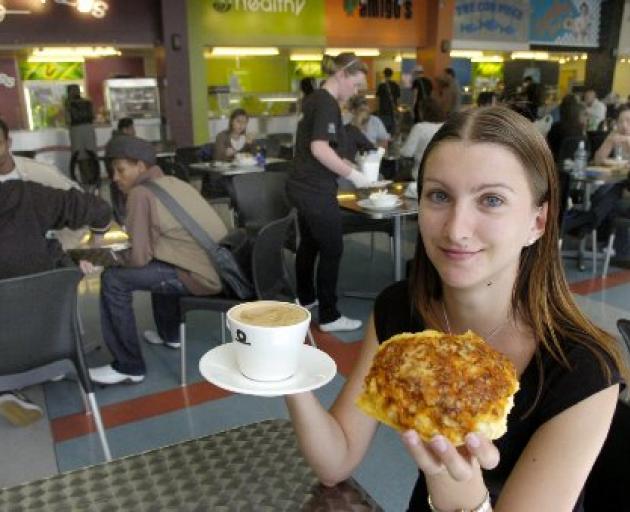 A recent article in the association magazine Critic commented that rising prices, in several cases ranging from 50c to $1, at the food court had led to criticism that the university was ‘‘putting profits ahead of student welfare''.

The article also included criticism of the $6.50 price of a sandwich sold in the University Union.

Cheaper sandwiches, including some selling for $3.50 for a pack of two, are also available at the food court.

During the Masters Games, held on campus in early February, prices at the food court went up about 40% and the students association sought assurances that prices would drop again once students returned, the Critic article stated.

Prices had since gone down, but, for most items, remained 50c to $1 higher than last year.

University chief operating officer John Patrick said the price rises resulted from higher costs, including labour costs, and increases in the cost of ingredients, including cheese and other dairy products.

The quality and variety of food and drinks such as coffee available at the building, including at the food court, had ‘‘infinitely'' improved in recent years, Mr Patrick said.

The food court aimed to offer good value for money and was highly rated by students in annual surveys. However, the facility also had to stand on its own and could not be subsidised by government funding or by student tuition fees.

Any resistance to price rises would become apparent to university organisers and would be taken into account, but he was not aware of any such negative response by student consumers.

About 10 students and one university staff member dining at the food court were recently interviewed by the Otago Daily Times about value for money and food price issues.

Most students said the meals were generally good value for money but some warned that any higher food prices in future would result in less frequent dining at the facility.

Several students were eating large burgers, available through the Union Grill outlet, in the food court, for $9 each, and accompanied by sizeable helpings of salad and chips.

The burgers - available in a range of fillings, including chicken brie, beef and fish - were among the best value for money options at the food court, students and students association officials said.

Roydon Reardon (19), a second-year BCom student, said his chicken burger was ‘‘pretty good'', given ‘‘the price and the amount you get''.

Second-year BSc student Keegan Iraia (19) said his beef burger was ‘‘a good meal for the price'' and significantly cheaper than anything he could buy elsewhere in the city.

A university staff member said his meal represented ‘‘fair'' but not ‘‘great'' value for money and he was concerned that some students on low budgets might struggle to afford some of the food.

A check by the ODT showed that a wide range of food types - including oriental food, salads, fish, and a range of grill options - was available at the food court.

Much of the food seemed reasonably good value for money, and a check of some non-university food outlets in the city showed that, overall, the university food court prices were somewhat cheaper than, or in some cases, similar to, prices elsewhere.

A sizeable cooked breakfast avail able from the Union Grill for $10 appeared to be several dollars cheaper than other alternatives available at some inner city food outlets.

But knowledgeable consumers could also find individual food or drink bargains elsewhere, such as small flat white coffees available at one inner city outlet for $2.70

The range of portion sizes, food types and perceived value for money within the overall university food court offerings meant buyers would benefit from choosing their options carefully.

The union food court flat white coffee price of $3 for a standard size cup was at least 50c cheaper than at most other outlets in the city, but somewhat higher rates for hot drinks were also charged at one university run outlet in the Link.

One key factor was that the living component of the student loan scheme, which had not increased from about $150 a week since 1992, Mr Wilson said.

This meant that some food court meal prices such as $8.50 and $9 were difficult for students to afford, particularly on a regular basis, he said.

Several students had already approached him with concerns over the higher prices.