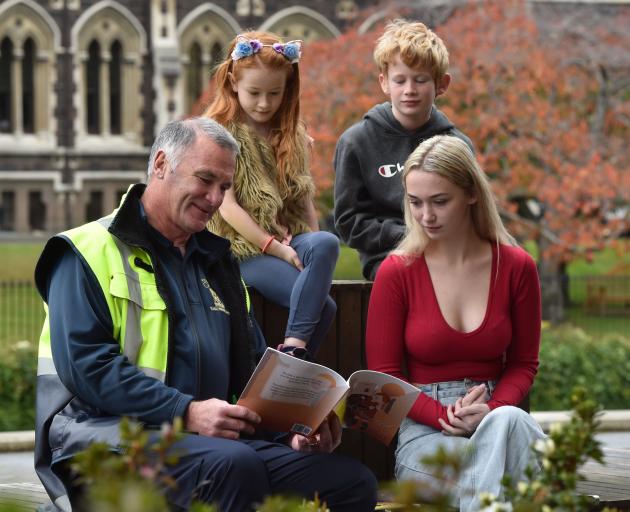 Steve Crosland, of Dunedin, reads one of his three children’s books, Grandad’s Nose Hair, to his grandchildren, Devan Crosland (16) and Vienna (7) and Leith (9) McClenaghan. PHOTO: GREGOR RICHARDSON
If you see Campus Watch team member Steve Crosland scribbling in a notebook during a shift, it does not necessarily follow that he is taking notes about a student escapade.

Inspiration may have just struck for his latest children’s book.

In his 12 years working for the University of Otago safety service, Mr Crosland has also penned three books for children.

Writing them around his shifts, the grandfather of eight said it all started with a request.

"My granddaughter Devon wanted me to write her a story, and I couldn’t say no," he said.

In 2016, with no formal training, he wrote Louise Stuck Up to Her Knees, about a girl who finds herself stuck in a "puddle of sticky, ooey, gooey, runny honey" and is helped to free herself by a host of animals.

"I like rhyme. It’s easier than prose," Mr Crosland said.

Urged on by friends, he sent his manuscript off to London publisher Austin Macauley, which duly published it.

This debut was followed by The Land of Mud in 2019.

That book, he said, was about accepting people for who they are.

Last year, Balboa Press published Grandad’s Nose Hair, about a grandfather with nose hair so long the Queen of Schnoz had measured it.

"I got this idea when my granddaughter met my father.

"He was looking a bit rough, but she didn’t notice any of that," he said.

Mr Crosland said the things children said and did inspired him.

"Now and then students around campus act like children," he said.

Although he occasionally wrote poems about students and what they got up to, he kept those in his private collection.

His advice to would-be authors was simple: "just write".

"It’s one step after another," he said.