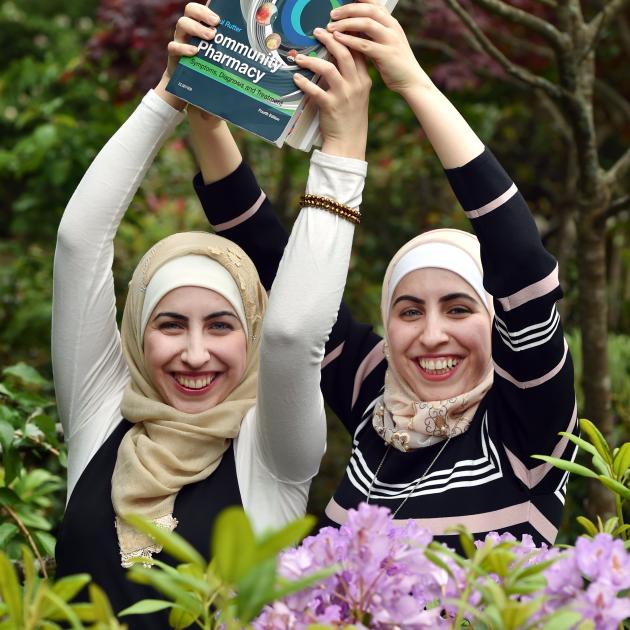 They grew up in the Syrian capital, Damascus, but war forced them from their home country, and their family moved, via Lebanon, to Dunedin in 2014.

The identical twins undertook English language and foundation year studies at Otago University in 2015, and the health sciences first year in 2016 before completing the further three years of their pharmacy degrees.

"It’s great to be graduating - it’s been a tough three years," Dareen said.

The sisters also had fun during their studies, and found the Otago School of Pharmacy supportive, and a "good environment" to study in.

They will be among more than 360 Otago health sciences students to graduate in person at the second of two graduation ceremonies, at 4pm, at the Dunedin Town Hall today.

Although initially unsure of the best study methods, she and her twin sister had enjoyed supporting each other, and had also been strongly backed by their teachers and student friends, Dareen said.

"We used to study together and were like a team."

When one of them struggled to understand something, the other twin could often explain it.

"When we got here we didn’t have an English language background."

Both have already gained jobs for next year, a trainee intern year needed for them to practise as pharmacists.

Dareen will work in a community pharmacy in Christchurch, and Nadeen in Oamaru.

Dareen said she felt "really grateful" for all the support she had received.

They also became New Zealand citizens at a ceremony at the Dunedin Municipal Chambers on Wednesday, as did several other family members, including another sister, Yasmin Saleem, and brother Ahmed Saleem.

"I feel like I’m part of New Zealand," Dareen said. "It’s my duty now to give back to New Zealand."

Their parents, May Taha and Mohamad Saleem, were previously a pharmacist and a gynaecologist.

"I feel like Dunedin is a safe home for us," Dareen said.

Nadeen said she felt "so happy" to be graduating.

"The whole family is gathering and it’s going to be really special," she said.

"Dunedin and New Zealand is like home," she said.

"I love this place. I feel like lots of hard work has paid off."

• Remarkably, twins Yingyue and Qiaoyue Wu, of China, are also graduating from Otago with qualifications in pharmacy today, as are two of three triplets, Weam and Wala Edwik, of Libya. Their sister, Wafa, is studying medicine at Otago.

A nice story. A shame they couldn't find work in the same place. Hopefully down the track they will be together working in the same city.