Departing Hayne 'in awe' of university 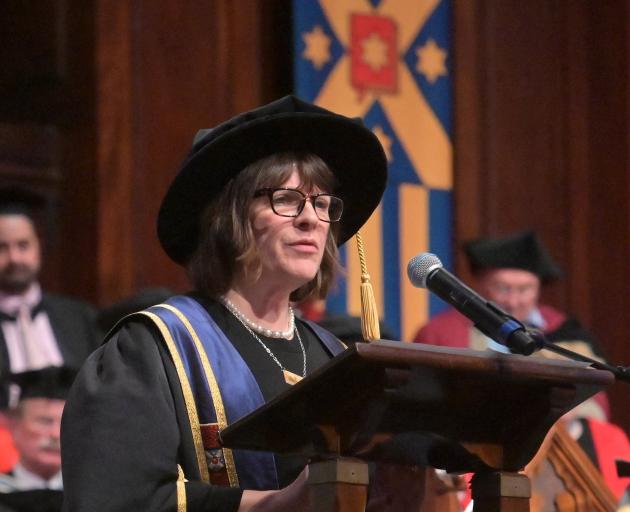 Job losses during her tenure might have dented her popularity, but the university was on a sure financial footing that helped it absorb the shock of this year’s Covid-19 pandemic, she said.

"Coming out of Covid, we will be less exposed to redundancies," Prof Hayne said.

She will continue to lead the university until April, when she will start as vice-chancellor at Curtin University in Perth, Western Australia.

Her second five-year term at Otago had been due to expire in August 2021.

A search will begin soon for Prof Hayne’s replacement.

The American-born vice-chancellor, who joined the university in 1992, said she would be leaving the facility in good heart.

From dealing with the aftermath of the Canterbury earthquakes to meeting challenges associated with Covid-19, Prof Hayne said her time as vice-chancellor was punctuated by unexpected events.

They included the student community being affected by the Christchurch mosque shootings and the death of student Sophia Crestani at a Dunedin flat party last year.

Covid-19 resulted in a series of significant challenges, including shifting teaching and examinations online and bringing in social distancing protocols.

"The university has really had its mettle tested this year."

However, the "vast majority" of her term was uplifting and she was in awe of the people and facilities at Otago.

Prof Hayne said she sought to elevate the importance of teaching at the university, promoting it alongside the value of research.

Facing criticism was sometimes difficult, but she said it was important to have a contest of ideas and respectful debate.

Prof Hayne said she stood by making tough decisions, such as cutting 160 full-time equivalent jobs in 2017.

Before she became the university’s first female vice-chancellor, Prof Hayne was research and enterprise deputy vice-chancellor and head of the psychology department.

Former chancellor John Ward, who led the appointment process in 2011, said Prof Hayne came under pressure during restructuring processes, but was supported by the university council and her executive team.

Defending a cap on international student numbers had also been shown to be prudent, as the university was less exposed to the pandemic’s impact, he said.

He described her as a clear communicator and a champion of people who were the first in their family to receive tertiary education.

A highlight of Prof Hayne’s time as vice-chancellor was celebrating the university’s 150th anniversary last year, he said.

One of her early moves was increasing the profile of the student code of conduct.

Prof Hayne said work to tackle a culture of excessive consumption of alcohol would have to continue, but she was proud of progress.

The remaining levers that could make a significant difference were in the hands of the Government, she said.

Prof Hayne has two adult daughters and both will continue to work for the University of Otago.

She is embarking on her Australian adventure solo.

The restructuring has not set up the institution well for the future. It failed to deliver the cost savings it was premised upon. It caused harm to every member of general staff whose future was in limbo for years. It has created a new tier of managers who are highly paid and do little. It has pushed work that was performed by general staff onto academic staff. What's alarming is that she seems to believe it worked, well prove it. Conduct a staff survey that measures staff confidence in the institution's leadership, restructuring and the future it has created. Thank goodness she's going, but what she leaves a legacy of damage caused by strategic decisions taken on the basis of whimsy with no evidence.