Solutions to rubbish problems in North Dunedin are on the table after large items of furniture were dumped on footpaths in recent weeks, the University of Otago and Dunedin City Council say.

But answers to some of the broader issues facing the tertiary precinct — from alcohol and mental health to improving the ‘‘liveability’’of the student quarter — are also on the agenda, following the death of 19-year-old student Sophia Crestani last year.

She died at a Dunedin house party in October, after which her parents asked for a community clean-up to be held in North Dunedin in her memory.

The event was organised by the University of Otago and Otago University Students’ Association, and an estimated 2500 students and other volunteers helped collect rubbish. 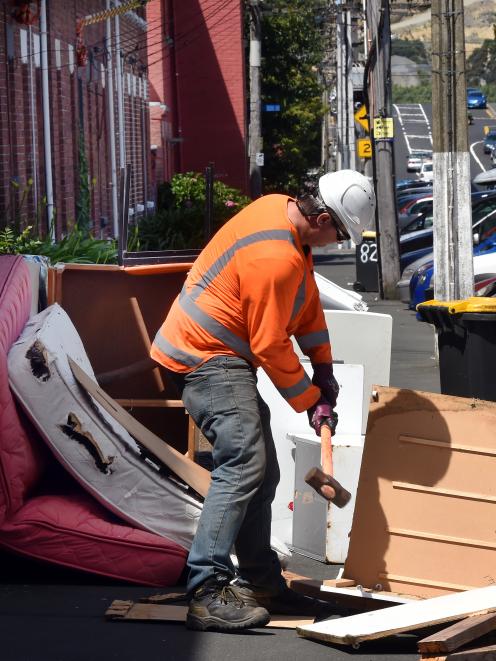 A contractor breaks up discarded furniture before removing it on Dundas St, in Dunedin’s student quarter, yesterday. Photo: Stephen Jaquiery
Since then, organisations including the council, university, Otago Polytechnic, Dunedin Police, Fire and Emergency New Zealand and student bodies have met to discuss broader improvements to life in North Dunedin.

Otago Property Investors Association president Kathryn Seque, who attended the meeting, said that included discussing initiatives to encourage students to dispose of their rubbish properly, and also to improve students’ engagement with Campus Watch and their ‘‘mindset’’regarding alcohol and mental health.

‘‘It’s unfortunately taken the death of one student to do it, but hopefully come this time next year there won’t be as much rubbish on the street.’’

University property services division director Dean Macaulay said the university was also considering further steps to improve the rubbish situation in North Dunedin, but it was not known whether that meant extra skips.

The university already provided skips at 11 locations for 13 days each year, and replaced them when full, as well as providing large bins for glass recycling at four of the locations last year, he said.

In 2019, 375 tonnes of rubbish was collected from the student area.

As well as monitoring skips and advertising the service, the university inspected 11 streets weekly to identify ‘‘potential problems’’ with rubbish.

The final inspection last year was on December 4, when just one item of furniture was found on a footpath, while other streets were ‘‘clean and tidy’’.

The next inspection, on January 8, found ‘‘a lot of furniture, non-DCC bags of waste and several mattresses’’ dumped on footpaths.

Council infrastructure services general manager Simon Drew said the council had spent about $8500 in recent weeks removing an extra 26 truckloads of waste from streets in the campus area.

That work was continuing before the majority of students returned to the city, ‘‘when normal services will resume’’.

‘‘The DCC will continue collaborating with the university to find new solutions to manage the waste and help encourage students and landlords to recycle and reuse goods where possible.’’

A simple European solution exists. In the country where I lived for a couple of decades had a great idea: every 6 months there is a council collection of all large items such as furniture and appliances. Items were placed on the footpath on a specific day, and collected the next day. This lead to a lot of recycling as repairers of such items whom would collect a lot of it at night before pick up and the rubbish trucks the rest. It was paid for via rates. Everyone was happy. Makes more sense and it would eliminate most fly dumping.

But could the DCC think of such a solution? It has park parks to eliminate, empty cycle lanes to build, a bridge to now-where to plan and create, and try to get someone to use and pay for the rarely used stadium....

I was under the impression that the DCC still provided large skips for students to dump waste at the end of the year.
Does this not happen any more?
And why not?

Simply due to the fact ratepayers are footing the bill for the cleanup. I don't see why ratepayers should be paying to clean up the mess? Send the students the bill, or bill their parents. No where else in NZ will you see student slums elbow deep in rubbish. Stop treating Dunedin as a toilet you lot. Try this stunt in Auckland or Wellington and see how you get on! Much of your crap gets washed into the harbour via the Leith, great for the environment eh.

The rubbish problem could probably be reduced by 50% if Uni and DCC stopped moanining so much over students burning couches ... ;-)