Ready to cast a line in new fishing season 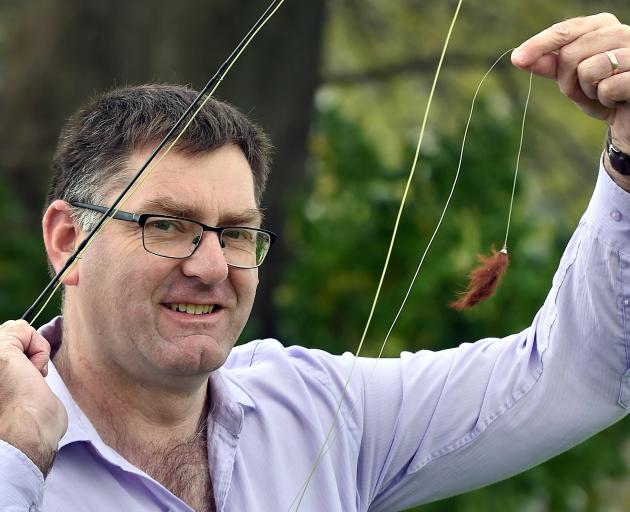 The angling season approaches and Otago Anglers Association member Tim Gibson, of Dunedin, with a glistener, is ready to slip away from a South Otago golf trip this weekend for a few moments looking for brown trout in a river. PHOTO: PETER MCINTOSH
If he makes it to the back country, he could be walking 10km up a river and he could be gone all day.

If he is casting in the Taieri River, he might only be out for an hour after tea.

But wherever he finds himself, angling is an important part of Tim Gibson’s life.

The start of the new fishing season on Friday was such an anticipated time of year for the Dunedin property valuer, he said he would sneak away from a South Otago golf getaway this weekend and trade the fairways for some time targeting brown trout.

A nationwide Fish & Game survey shows Mr Gibson is not alone in his thinking.

Anglers who reactivated their licences this year said they bought a licence mostly because they were encouraged to by friends and family, and because fishing was easily added to their holiday plans.

The ‘‘thrill of the catch’’ came fourth.

Fish & Game officer Bruce Quirey noted the start of the new fishing season on October 1 lined up with Mental Health Awareness Week (from September 27 to October 3) this year.

‘‘For most people who went fishing for the first time and for those who took it up again after a few years’ break, fishing’s a way to enjoy nature and get outdoors,’’ Mr Quirey said.

‘‘It’s really interesting because their top three responses all relate to mental wellness.’’

The national survey was co-ordinated in Otago and the data was analysed by Southland Fish & Game.

Mr Quirey said Fish & Game wanted to find what motivated people to go fishing, and specifically why they bought a fishing licence in 2020-21.

Fish should be in fine condition for the start of the season after a mild winter in Otago, he said.

‘‘Most rivers should be stable because, unlike Canterbury, our region has not seen any significant floods recently.’’

Most high-country waters remain closed and will open on November 1.