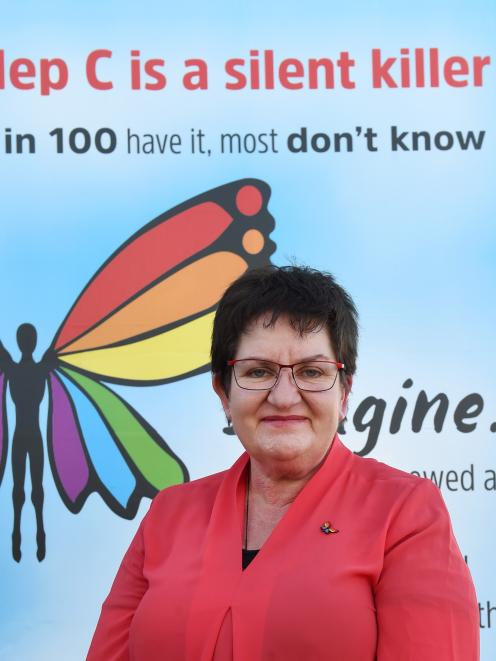 This year's event, on July 28, would be about alerting the thousands of New Zealanders who did not know they had the hard-to-diagnose blood-borne illness, she said.

''This year is the best World Hep C day ever.

''Last year we didn't have free access to medication, now we have, and the latest trials show it to be pretty well 100% effective within eight weeks, with almost no side effects,'' Ms Heal said.

''But there is no other disease like this. The stigma profile is so bad that we can't find all the people we need to treat.''

About 50% of people who required hepatitis-related liver transplants had been unaware they had the disease due to the frequency of misdiagnosis or lack of testing for it, Ms Heal said.

There was a widespread and misplaced conception in the medical profession and the community at large that a person with hepatitis C had led a ''colourful'' life, but as 1% of the population was estimated to have hepatitis C, that assumption was wrong. It was often not the case that people had led a ''colourful'' life , Ms Heal said. The condition went undiscovered for decades

''I think it is a myth. The latest research we have is that around 30% of people get the disease from other ways.

''Being born before 1966 is a clear risk factor, and that's not anything you have done in your past; all you probably had to do was go to the dental nurse (before gloves were used) and you have lived with this virus without realising it. There were any number of ways to contract a blood-borne infection.

''Because of that there is a great big cache of people who have no idea at all that they have it ... but if you discover you have it, it is actually great news because you will get free medication from your doctor which can cure you and make you feel heaps better.''

Hepatitis C awareness has received a huge boost in recent months after the release of a documentary film about Dunedin musician Martin Phillipps, the lead singer of The Chills.

The movie is as much about the life and times of the band as it is about Mr Phillipps' successful treatment for hepatitis C, and had been an enormous boost for the ''anti-stigma message'', Ms Heal said

''We are so grateful and so proud of Martin for stepping up.

''There have been plenty of celebrities who have had the opportunity, but Martin has had the courage to do it ... we will promote Martin's story around the world and he will cause lives to be saved.

Ms Heal has had her own work acknowledged with the announcement this week that she is a 2019 Sir Edmund Hillary fellow, one of 51 award recipients worldwide.

''I am hoping to use the award to link up with people who can help with my mission to eliminate hepatitis C worldwide.''

Ms Heal's Hep C Action Group will have a presence at the Royal New Zealand College of General Practitioners conference, being held in Dunedin this weekend.