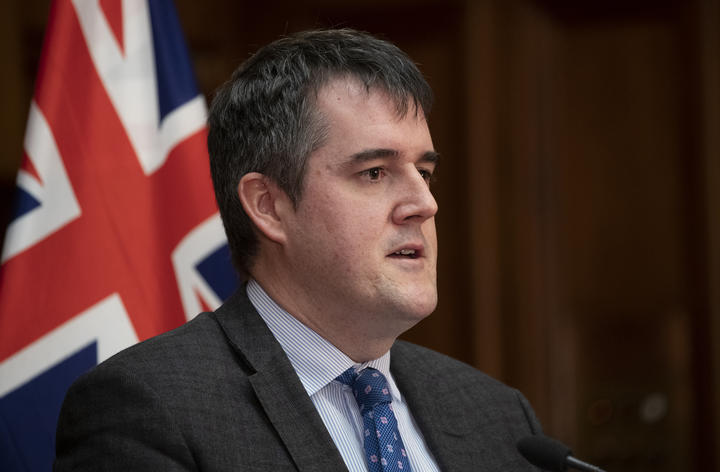 National Party Covid-19 spokesperson Chris Bishop. Photo: RNZ
The National Party is poised to unveil its plan for reopening the border as pressure mounts on the government to clarify what life looks like beyond the elimination strategy.

National MPs have been tight-lipped about the party's scheme, but are already touting it as the most comprehensive and well-researched plan to date.

It comes just a day after the ACT Party released its plan on reopening the border; both opposition parties agreeing that Kiwis should be free to travel by Christmas.

In a widely-published opinion piece at the weekend, former Prime Minister Sir John Key, who led the National Party, called time on what he called New Zealand's "smug hermit kingdom".

His comments reignited the debate about how and when New Zealand should reconnect with the world, this month marking 18 months since the border was closed at the start of the pandemic.

As of yesterday, 80 percent of the eligible population have now either booked in or had at least one Pfizer dose, 77 percent have had their first dose and 44 percent are fully vaccinated.

The ACT Party has now released its 'life after lockdown' policy document; pitching the government ditch lockdowns and focus on isolating individuals, such as the medically vulnerable and recent arrivals, instead.

"If we're reducing the running average number of cases by two a week, even at that rate we face another seven weeks of level 3 restrictions in Auckland. That has become unaffordable and unsustainable for too many people."

National has already called for purpose-built managed isolation and quarantine (MIQ) facilities and the introduction of saliva tests - key policies that will likely make up parts of the party's future plan.

Much of the plan's detail has been kept under wraps ahead of today's announcement, but Covid-19 Response spokesperson Chris Bishop has hinted it will please the double-vaccinated.

"If you're a double-vaccinated Kiwi you have given yourself the protection against Covid-19 and you will enjoy the fruits of National's plan, if the government adopts it."

The National Party will release its plan later this morning.